AppleInsider
Posted: March 20, 2018 8:42PM
in General Discussion edited January 2021
Promise's Apollo Cloud 2 Duo has a simple setup process on the iPhone that just about anybody can handle, and is the closest thing we've seen yet to network storage as an appliance -- and we've been beating on one for a month. 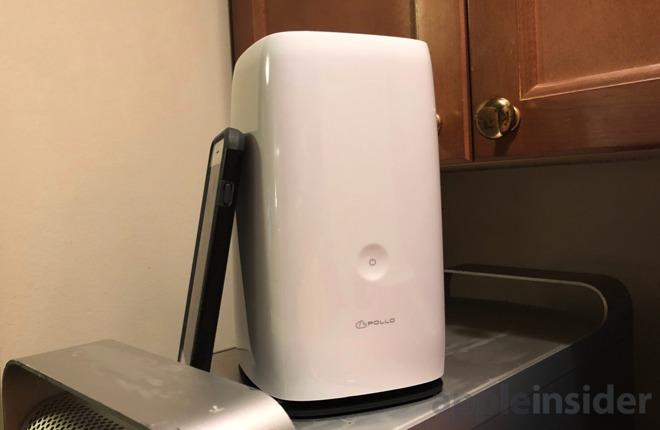 The Apollo Cloud 2 Duo hardware was released in August. For $449, the package ships in two configurations with dual 2- or 4-terabyte "surveillance-class" hard drives which can be configured in RAID 0 or 1 configurations. A USB 3.0 type A port allows for backup, transfer, and restore.

Network connectivity is provided by a Gigabit Ethernet port. Mac users can use the device not just as a file repository, but also as a Time Machine drive, with incremental backups possible over the internet as well. 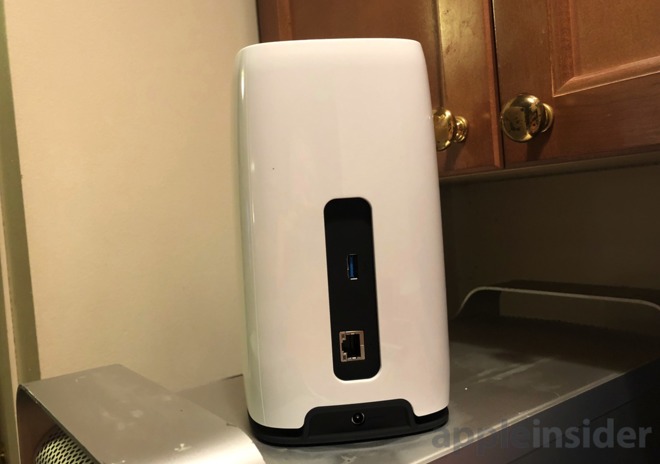 Getting it out of the box

Initial hardware setup is simple. Plug it into power, plug an Ethernet cable into it, and it turns on. Promise, and AppleInsider recommend hanging it directly off the router, which for most setups may be the only network switch available, but that's more for traffic localization and management.

It's then synchronized to the iOS app for setup using an account creation and QR code scan -- and that's it. After that, it's ready to go on iOS, allowing for full Files integration with stored data on the device, as well as camera roll backup to it through the iOS app.

For the tech savvy, it also has an easy mirroring procedure to another Apollo across the internet, perhaps allowing for some easy backup solutions for people you get sucked into supporting, without turning to a subscription service like Backblaze.

Access on the Mac isn't initially quite as simple as logging into the device from the Finder, at least at first. The Apollo Cloud app must be downloaded from the App Store to access the array at first -- but after that installation and subsequent login, it pops up in the Finder's list of accessible drives, and the available Time Machine targets as well.

We might be under-selling the integration with the iOS Files app a bit, and it is as good as we thought it was after we took it out of the box. Instead of relying on apps to have their own network retrieval routines, like that included with the in-app purchase of GoodReader, you can load up the Apollo Cloud 2 Duo with your own PDFs, grab them from Files, and "pull" them from the iPad or iPhone, and move them to any compatible app.

So, instead of "pushing" content to the iPad before you sit down to read from your library stashed on your computer, you can "pull" it with the Files app from the Cloud 2 Duo

Access on Windows is...problematic. The array doesn't seem to have any kind of SMB at all. A PC app allows for a mount, and the drive can be addressed on the network with a manual IP entry, but the ease of use for the PC isn't quite as refined as it on the Apple side of the fence.

So, in short, Windows access is doable, but not as slick as it is on the Mac. The Android app is just as good as it is on iOS.

We've seen too many network attached storage devices poorly configured by users, with a big pile of data shared amongst everybody. The Apollo Cloud 2 Duo software has support for up to 40 discrete users both on the LAN and across the internet as a whole, each with their own file repository and Time Machine backups.

Don't be that person with a data pile. Take the one minute it takes on the Apollo Cloud 2 Duo, or the two it takes on any other NAS or on a server to gives users their own account. You won't be sorry.

Filling it full of data

For lack of a better phrase, the array has a "slurp" feature, that allows you to plug in a USB drive, and the drive automatically sucks up the data.

Once again, the feature is tailored for Mac users, allowing for HFS drives to be transferred with no difficulty. Other drives formatted with exFAT and NTFS work as well --
but the older FAT32, which many flash drives are pre-formatted, does not seem to be supported at all.

After getting activated through either the iOS or Mac app, data is ingested through the USB port at about about 92 megabytes per second, about the same as adding to it with a wired Gigabit Ethernet connection.

What could have been

Network attached storage isn't new, and obviously, nor are network-accessible Time Capsule drives. However, there remains a barrier to entry to setup and configuration for most of the products that will provide that for users.

Promise's Apollo Cloud 2 Duo has very few hurdles to jump given the guided iPhone setup. It is intended as an appliance after you set it up, set and forget, and isn't really intended to be a multi-purpose device with lots of options, like some of the mid- and high-end Synology products.

As a network attached storage device that integrates very well with Apple devices, the Apollo Cloud 2 Duo does what it says on the box with a bit of style. It's what we wanted the Time Capsule to evolve into, minus the whole router part.

What it is not, is a highly-configurable full network attached storage device. There is no "app store" to add features like iTunes streaming or a Bittorrent client. This isn't a bad thing for the target audience -- which is basically the crowd with a bit more adeptness than the ability required to set up a Time Capsule, but not that interested in configuring a full network attached storage device or home server.

So. If you need a network attached storage appliance, that you don't think you'll have to upgrade or add features to, the Apollo Cloud 2 Duo gets a...

But, it's not as simple as that. If you have a PC, with the present state of software, take off a full star. This may improve in the future, and if it does, we'll let you know.

If you think you'll need to expand the software on the storage device, adding more features that a "full" NAS might give you then just don't bother, and save your money for one of those -- but realize that the product wasn't made for you in the first place.

Promise Technology's 8-terabyte Apollo Cloud 2 Duo retails for $449.00, but both Amazon and B&H Photo have the personal cloud storage device on sale for $399.00, a discount of $50. B&H Photo is also tacking on free expedited shipping to the contiguous U.S. with no tax collected on orders shipped outside NY and NJ (CO and VT residents, see here).
Sign In or Register to comment.