AppleInsider
Posted: June 21, 2018 3:24PM
in iOS edited June 2018
The newly released Eve Aqua is a HomeKit equipped smart water controller that tries to make lawn and garden maintenance easy with scheduling, remote control, and even Siri support. AppleInsider has spent a few days testing it out during the latest heat wave.

Faucets and sprinklers were added to HomeKit as part of iOS 11. It has taken nearly a year from the release of iOS 11 for the first products taking advantage of the new spec to hit the market. One of the first, if not the first is the Eve Aqua from Elgato. 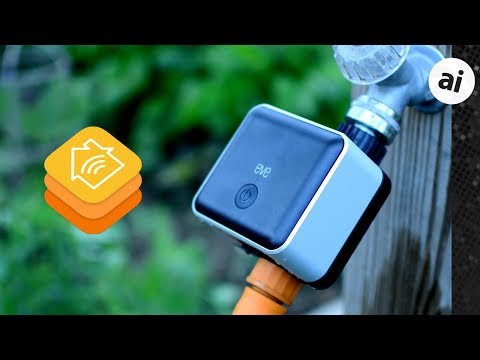 What Eve Aqua allows you to do is control your outdoor spigot from your phone. It can be scheduled and automated, as well as toggled remotely. This makes gardens and lawns much more hands-off, and owners never have to worry about leaving the water on again.

Eve Aqua is also able to show you estimated water consumption, which can give a good idea at how much it is costing to keep your lawn green and gardens blooming.

We set the Eve Aqua up in two different scenarios -- with a sprinkler and with a soaker hose. We tried it with our lawn, as well as our budding vegetable and herb garden.

In our short trail so far, it worked well, though we found it was best used with the Elgato Eve app over Apple's Home app. This isn't on Elgato, though, as Home has a few limitations, making it not ideal.

Elgato says soon a sizeable update will be coming to the Eve app, adding even more functionality than already exists.

There were a few oddities that we noticed shortly after getting going. Again, not at the fault of Elgato, but Apple's HomeKit implementation. Sprinklers cannot be included as parts of scenes, or included in any automation being configured. It is a really odd limiting factor, but is good that the Eve app helps make scheduling possible.

One thing we were worried about out of the gate, was connection and reliability while outdoors. This will clearly vary based on individual homes and spigot locations, but it was able to work reliably for us. Additionally, schedules created in the Eve app are transferred to the Aqua, allowing it to run completely independently of any connection.

Eve Aqua is a really neat piece of hardware, and we will be spending much more time with it over the next week or two as we work on our comprehensive review. Days of data will be needed to see how the graphs display, how reliability holds up, as well as what new functionality arrives with the Eve app update.

While we were happy with how the Aqua has worked so far, we really need to put it through its paces to see whether it can beat out traditional "dumb" timers people have used for years.

Luckily, Eve Aqua is now shipping, just in time for the summer gardening season. You can find more about it over on Elgato's website.