AppleInsider
Posted: August 7, 2018 4:30PM
in General Discussion edited August 2018
Since the dawn of the iPhone, there have been puzzle cube-solving apps. However, GoCube is looking to combine position-aware cubes with software to not only make learning how to complete the puzzle easier, but also grow the venue for competition between solvers.

Readers of a certain age will recognize GoCube as a derivative of the Rubik's cube from the '80s, with a few key differences for the modern user.

Traditional cubes used plastic bearings. Over time, as the scene grew, competition style cubes were created, using magnets or other bearing surfaces, to help players increase speed. GoCube takes this mechanical approach a step further, by adding Bluetooth Low Energy (BLE) and sensors to determine the rotation of the faces as well as the orientation of the cube. 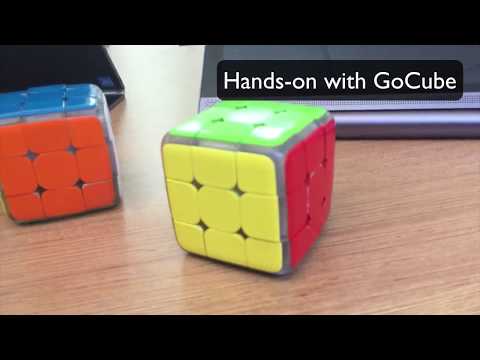 If you've ever had a cube and tried to use an application to solve it, you know the frustration of trying to follow along with the app and one wrong move, rotating counterclockwise instead of clockwise, means the app and your cube got out of sync, and you had to start over.

With GoCube, the associated app can tell you that you've rotated it the wrong direction, and you can continue solving the cube, without having to start over.

There is a notation used amongst competitors, so that all competitors compete on a cube scrambled the same way. The GoCube and the app will teach you that official notation used in competition while practicing, potentially getting you ready for the big leagues.

The GoCube app teaches you how to solve the cube, and monitor your solving speed. Because it's connected to the phone, you don't have to start a separate stopwatch, it knows when you've begun to turn the first face.

Instead of only person to person competitions, you can compete from anywhere, with leaderboard support baked into the app.

The companion app we saw is in beta, and is currently built on Android. We were given assurances that the app would be released for iOS when the cubes ship to customers.

The codebase is built on Unity, so we have no cause to doubt that iOS will be supported.

We took a competition-level cuber who can solve a normal cube in about 15 seconds to meet them, as well as a complete novice, and had both of them use the cube.

The competitor found that the prototype cube needs some movement refinement -- but he wants one. The novice said out loud between recording takes, "that was fun, I want to do it again!"

Given the digital nature of the app and the cube, there are other utilities and games available. A "Guitar Hero"-like cube game was demonstrated that asks users to rotate a face depending on which side of the screen a dot is coming from, a we also saw a drawing application that asks you to scramble the faces in patterns to make an image when multiple faces are combined.

In summary, GoCube seems like a great way for a novice to learn the 3x3 puzzle cube, or for a more advanced cuber to compete with others over the Internet. We hope to review the production cube and iOS app in the future when the GoCube is released.

The cube with position and orientation transmission doesn't carry much of a price premium over a competition-grade one, which generally sell for between $35 and $50. Early bird prices start at $69 for the basic cube, and $89 for the cube with better timing, advanced statistics, access to an online league with leaderboards, and offline progress saves.