To update the Apple Watch, open the Apple Watch companion app on the connected iPhone, and tap the My Watch tab. Under the General section, select Software Update and enter the passcode if requested.

Not all Apple Watch owners will be able to benefit from using watchOS 5. The first-generation Apple Watch was not compatible with the software during its beta, and Apple's website also advises the device will not work.

The Apple Watch Series 1 and later iterations can run watchOS 5. 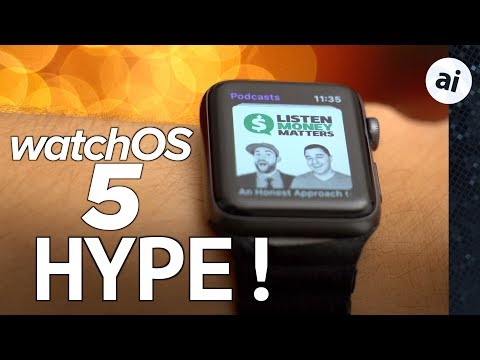 As is to be expected from a milestone operating system release, Apple has included a number of new features and major changes to watchOS 5 to make the Apple Watch even more useful to owners.

One of the most accessible features in watchOS 5 is the Walkie Talkie app, which enables Apple Watch users to perform push-to-talk communications with each other via their wearable devices. After connecting the Apple Watches together via the app, one person can press the on-screen button to open the line of communication, with their message automatically playing aloud on the recipient's device.

Another big change relates to activity, with users able to set up competitions with other Apple Watch users, to encourage them to work out more. Competing against each other for awards at the end of the designated period, the users can check each other's progress over time, enabling accountability for exercise while also showing how far in front or behind their friends are in the contest.

Notifications are being made more intuitive in WatchOS 5, with the ability to respond more easily, while integration with WebKit also adds further improvements to message notifications.

The Siri watch face will now allow third-party apps to appear, including some from Nike. Siri has also been altered to trigger if users raise their wrist to their face, rather than using the earlier "Hey, Siri" verbal prompt.