AppleInsider
Posted: November 6, 2018 2:25AM
in iPad edited February 2020
Ahead of launch this Wednesday, Apple has shared a series of glowing iPad Pro reviews that praise the fresh tablets' ultra slim design, powerful hardware and accessories like the second-generation Apple Pencil. 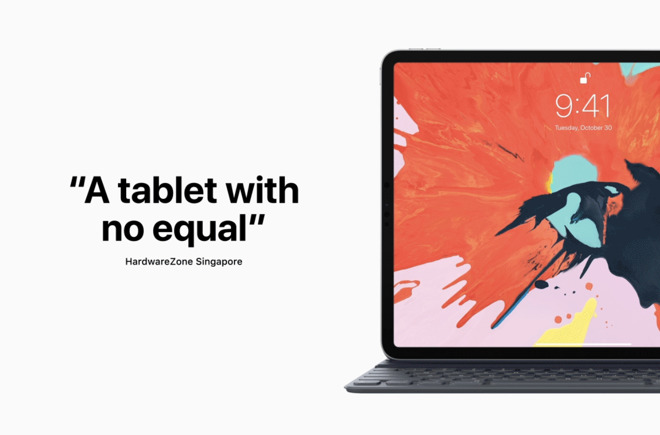 As usual, Apple seeded early iPad Pro hardware to a number of influential tech and mainstream publications, who took their respective reviews live this morning. It seems the company is restricting focus to the larger 12.9-inch iPad Pro, as in-depth evaluations of the smaller 11-inch model are not yet available.

Similar to recent hardware debuts, Apple aggregated a few notable quotes from the likes of Wired, Laptop, Mashable, Daring Fireball, The Independent and PocketLint in a press release designed to spark interest in the just-announced tablet lineup. Apple CEO Tim Cook and SVP of Worldwide Marketing Phil Schiller threw a spotlight on their favorite lines -- with a link back to Apple's webpage -- in respective tweets.

Wired said "By every measure I can think of, these are the best, most powerful, most capable iPads I've ever used. They put other tablets to shame."

"The mobile workflow was seamless and both the hardware and software were incredibly powerful," said Resource.

Additional images were shared from Instagram featuring images created on the new iPad Pros and and redesigned Apple Pencil.

NEW iPad Pro. Excited and proud to say that I'm one of the first artists in the World to create with @apple s new #ipadpro & #applepencil ! This is a crazy tool for experimental projects to merge digital drawings, traditional art and mobile photography together. I've used some of my calligraphy paper sketches, @procreate app as the main tool, #shotoniphone photos and @adobe @lightroom apps for color editing. This is the next level of my creativity. Some of these artworks will be used for my upcoming new clothing collection! Stay tuned. _______________________ , , Apple! -- , , Lightroom, Procreate. , -- , , . ! . -! .

Apple cherry-picked snippets of longer reviews which, while mostly positive, included criticisms of the new iPad Pros as well. A common refrain from journalists is the less-than-stellar experience iOS offers when pitted against traditional computers. Apple often compares iPad with laptops from other manufacturers, opting to refer to the slate as a computer rather than a mobile device. When the latest Pros were unveiled last month, for example, CEO Tim Cook contrasted lifetime and yearly iPad sales figures against the wider PC market.

"We've sold more iPads in the last year than the entire notebook lineup of all of the biggest notebook manufacturers," Cook said. "This makes iPad not only the most popular tablet, but the most popular computer in the world."

Despite Apple's marketing hype, however, the iPad Pro user experience compares unfavorably to full-fledged computers in key areas. Multitasking, while greatly improved since iOS 11, is not as intuitive or robust as a desktop, while reviewers have knocked Apple's iOS user interface -- and the Smart Keyboard -- for coming up short as a laptop replacement.

Still, there is much to tout in Apple's latest hardware, including impressive new features like an external redesign, TrueDepth and Face ID integration, and the powerful A12X Bionic Processor. The third-generation iPad Pro went up for preorder last week and is set for release on Nov. 7.

Apple provided similar review roundups for other recent product launches including the new iPhone XS/XS Max and the iPhone XR.