AppleInsider
Posted: November 7, 2018 7:22PM
in iPad edited November 2018
The A12X system-on-chip used in the new iPad Pro is extremely powerful courtesy of a few design decisions taken by Apple in its creation, a walkthrough of the new chip with Apple's Phil Schiller reveals, with one performance-enhancing example being the ability to run all eight processor cores simultaneously.

During the launch of the 2018 iPad Pro range, Apple advised the included A12X Bionic is a major improvement on previous models, consisting of an 8-core processor that provides up to 35 percent more performance for single-core loads, and 90-percent more for multi-core tasks. It also boasted about the Apple-designed graphics processing, consisting of a 7-core GPU, one which was claimed to be the equivalent an Xbox One S.

Speaking to Ars Technica, Apple Senior Vice President of Marketing Phil Schiller and Hardware Technologies employee Anand Shimpi explained how the processor was designed to provide so much performance. While it is a close relation to the A12 used in the iPhone XS, XS Max, and iPhone XR, Apple tweaked the chip to make it even more powerful.

The first main change for the A12X, produced with a 7-nanometer process, is that Apple allows for all of its CPU cores to run simultaneously. While it has four high-performance cores and four efficiency cores, with each intended for different tasks, most processors using this design style only allow a limited number of the cores to actually run at any one time, whereas Apple decided against this sort of limitation when making its custom-designed performance controller.

Benchmark tests performed on the hardware showed the 2018 iPad Pro to have performance at a par with some Mac desktops under Geekbench 4's single-core and multi-core trials. While it lags behind the 2018 MacBook Pro and 2017 iMac Pro, with a 2.9GHz Core i9 and 3GHx Xeon W processor respectively, in multi-core benchmarking, there is far less of a difference under single-core loads.

"You typically only see this kind of performance in bigger machines - bigger machines with fans," claimed Shimpi. "You can deliver it in this 5.9-millimeter thin iPad Pro because we've build such a good, such a very efficient architecture.

On the GPU side, it is revealed this is Apple's first 7-core implementation of its own custom-designed GPU. Shimpi advised each core in the A12X is "both faster and more efficient" than in the A10X, accounting for the doubling of graphics performance.

The performance gains over the A12 are put down to an increase in memory bandwidth despite using a similar implementation, with the A12X having "twice as big of a memory subsystem," according to Shimpi.

The Neural Engine was capable of performing 600 billion operations per second in the A11, while in the A12 this figure has increased to 5 trillion per second. In the new iPad Pros, the A12X Neural Engine has eight cores, but Apple declined to advise further about the architecture, except that it was not adapted from the GPU's design. 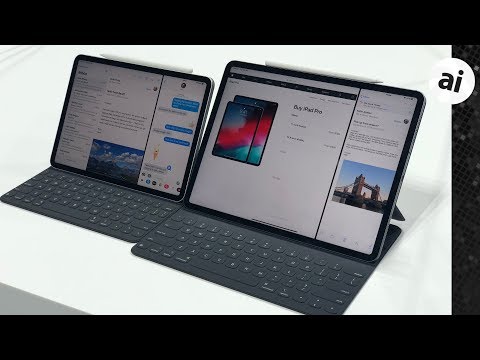 Apple's decision to push forward with its own chip designs is not down to Apple looking to compete with its competitors, Schiller suggests, with the company only focusing on its own work. "The competition can do whatever they're going to do. We're trying our things the best way we know how," the marketing chief said before suggesting "We're judging ourselves on ourselves."

Schiller also notes the team's passion to produce better A-series chips year-on-year, with employees taking the responsibility and constantly improving the hardware they are passionate about producing.

"We don't care if they're doing something that isn't interesting to us," Schiller continued on Apple's rivals. "We don't care if we're lapping them. Good. We'll lap them ten times. It doesn't matter because it's in service to the user, not the competition."

While Schiller avoided discussing the company's future plans, such as rumors of Apple shifting to its own design of chips for desktop Macs and MacBooks, but did offer some insight into how the teams work, noting the process of developing each chip takes place over multiple years.

"The chip team will be literally a detective on the other team, saying 'OK, we're planning, we really want more insight," Schiller advises, with the chip team employees researching how other teams want the chip to function, what bottlenecks there are, and when it could start creating the custom silicon for their needs.

"Those meetings happen multiple times a week. It's not like there's some big get together, once a year, just to align schedules. They literally are having these discussions weekly about - more and more - a growing number of topics. It's not a finite set. It's a growing number," adds Schiller.