AppleInsider
Posted: November 26, 2018 6:01PM
in iOS edited December 2019
Marking Computer Science Education Week, Apple is expanding its Everyone Can Code program to provide more students with the ability to learn to program, by providing more resources for learning Swift and opening up thousands of free Hour of Code sessions at its Apple Store outlets for the first two weeks of December. 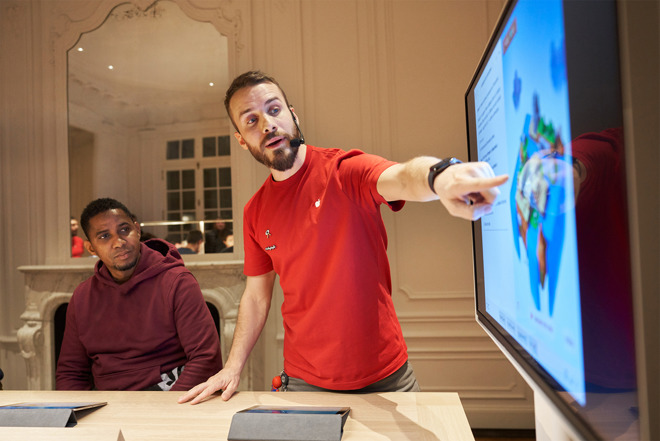 For the sixth year, Apple will host Hour of Code sessions via Today at Apple from December 1 to December 14, with the aim of teaching people at a variety of skill levels how to code. The Kids Hour sessions will teach children aged six to 12 about coding using robots, while participants aged 12 and up can attend sessions centered around Swift Playgrounds on the iPad.

As part of the same initiative, Apple has released a new Hour of Code Facilitator Guide for educators, to help teachers host sessions in classrooms using Swift Playgrounds and other iPad apps.

For outside the classroom, the Swift Coding Club kit offers resources for teachers, students, and other mentors to start their own group up. The kit provides students aged 8 and up with guides to collaborate, prototype apps, and to look at how coding could help their communities via activities from Swift Playgrounds and the App Development with Swift curriculum.

App Development with Swift is intended to provide students critical skills they need for high-demand and high-skill jobs, according to Apple. In the next school year, the company will release a free AP Computer Science Principles course syllabus and curriculum, allowing high school students the ability to earn Advanced Placement credit for learning App Development with Swift.

Students are also able to earn a certification for their Swift studies, with the App Development with Swift Level 1 certification exams offered through Certiport Authorized Testing Centers.

Apple launched Everyone Can Code in 2016 as a comprehensive learning program. There are now more than 5,000 schools, community colleges, and technical colleges around the world using the Everyone Can Code curriculum, provided as part of the program.