AppleInsider
Posted: November 29, 2018 6:58PM
in iOS
TechCrunch is in Germany to highlight promising new ideas and award a "Startup Battlefield" winner at its Disrupt Berlin conference, the second event it has held in the German capital and only the fifth it's held in Europe. AppleInsider is there to take a look at new tech on the Old Continent.


Disrupt Berlin includes two days of sessions and panel discussions on both Thursday and Friday, with subjects ranging from the business and technology behind cryptocurrency, artificial intelligence and self-driving vehicles, to social initiatives including efforts to protect the environment and safeguard human rights.

Insights across a decade of Disrupt

Since it originated in 2011, the TechCrunch Disrupt conference has offered an inside look at subjects in the tech industry from notable figures ranging from Facebook's chief executive Mark Zuckerberg to Apple's Vice President of Environment, Policy and Social Initiatives Lisa Jackson, who spoke at last year's Disrupt held in San Francisco.

At the second annual Disrupt conference in 2012, Zuckerberg dropped the bomb that Facebook had "burnt two years" in pursuing cross-platform, web-based mobile development rather than building a native app for iOS.

"The biggest mistake we made as a company was betting too much on HTML5 instead of native [apps]," he stated. At the time, it was still widely believed that Apple's early App Store lead would dissipate as developers increasingly adopted web-based apps that could be deployed outside of Apple's walled garden and be delivered to alternative mobile platforms including Blackberry and Windows Phone.

Zuckerberg's comments made it clear that the most popular mobile app in the world had determined that native app development was "going to be the approach," and confidently stated, "we're betting completely on it."

Four years later, Facebook was back at Disrupt 2016 to unveil "chat-based purchases," a tentpole feature of its much-hyped bot-centric strategy for Messenger. Again, it was broadly assumed that Apple's influence with iOS apps would erode away in the face of a new invasion of Artificial Intelligence "bots" providing the services formerly associated with apps.

TechCrunch itself had already weighed in on the "war on apps," publishing the article "Forget apps, now the bots take over," in 2015. That piece imagined that Apple's entire apps platform was about to be essentially rendered obsolete by a higher level of bot agents available in cross-platform messaging platforms. 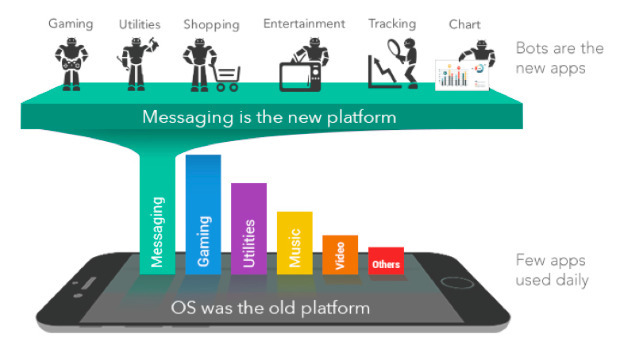 Three years ago, pundits imagined that apps were done and bots were going to take over


Instead, just a month ago Zuckerberg stated in Facebook's most recent quarterly earnings conference call that rather than Messenger's bots destroying iOS apps, the company's own Messenger and the WhatsApp app it had paid $21.8 billion to acquire--$55 per user--were only "leading in most countries," adding that "our biggest competitor by far is [Apple's] iMessage. And in important countries like the U.S. where the iPhone is strong, Apple bundles iMessage as the default texting app, and it's still ahead."

Rather than copying the industry and turning iMessage into a bot platform, Apple released iMessage App extensions in iOS 10, and then used that platform of "smart messages" to deploy Apple Business Chat iOS 11.3, enabling the enterprise to connect with its customers using their favorite medium: texts.

Disrupt Berlin 2018 features a "Startup Alley" pictured above where attendees can speak with representatives from over 400 early-stage startups based in Europe and looking for investment and buzz for their emerging products or services. Overwhelmingly, this new innovation is being delivered in the form of native mobile apps.

The event is also hosting a "Startup Battlefield" where 13 contestant companies present their startup pitch on stage in front of a panel of TechCrunch judges who will evaluate their ideas and award one group its "Disrupt Cup," a grand prize that includes a $50,000 award. AppleInsider will be sharing a variety of novel ideas and promising new services from startups attending the event, either as exhibitors or as conference sponsors.
Sign In or Register to comment.