AppleInsider
Posted: December 17, 2018 4:14PM
in Apple Watch edited December 2018
The Apple Heart Study -- conducted by Stanford University in conjunction with Apple -- was the largest ever investigating arrhythmia, with 419,093 participants. 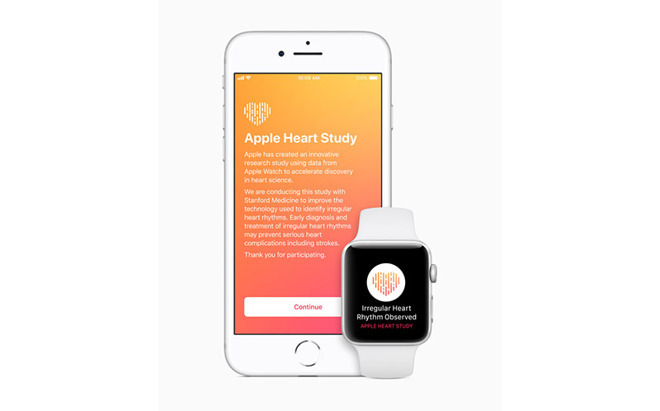 The figure was highlighted in Volume 207 of the scientific American Heart Journal. The Heart Study, which ran from Nov. 29, 2017 through July 31 this year, depended on voluntary enrollment by Apple Watch owners, who had to download a custom app to share data from their heart rate sensors.

The next-biggest arrhythmia study was a Swedish effort that recruited 25,000 people, The Motley Fool observed.

Stanford Medicine said that the Apple/Stanford project is in the last stages of data collection, with plans to publish final results in early 2019. The scope of the sample group has likely made collection daunting, but may also provide more useful results assuming Watch data is reliable.

Stanford is specifically interested in detecting atrial fibrillation, or "AFib," which can be a harbinger of an eventual stroke. Since AFib often goes without symptoms, a heart rate sensor may be one of the best bets for catching it.

Apple has ramped up its positioning of the Apple Watch as a health accessory, recently launching a promised electrocardiogram (ECG) app for the Apple Watch Series 4. Using the app and special sensors in the base and crown, the Series 4 can act as a single-lead ECG reader, making it the first FDA-cleared consumer product with that technology.