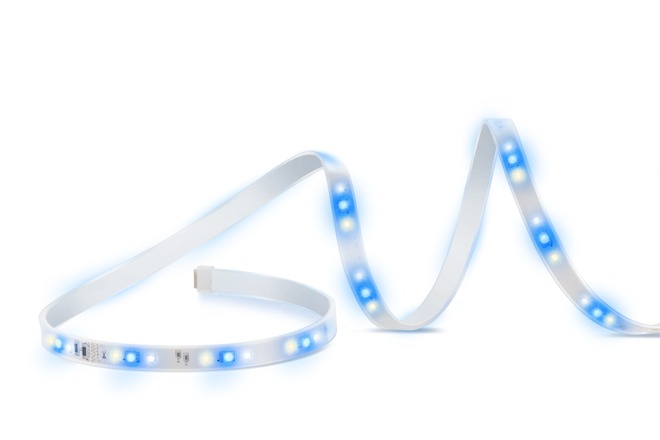 The strip comes in a 6.6-foot length and can be trimmed in one-foot intervals. Alternatively, it can be extended as well by combining four strips together for a total length of 32.8 feet.

The Eve Light Strip has "millions" of color options according to the company, It is capable of 1800 lumens of output, comparable with the bright Philips Hue Light Strip and

Shipping for Eve's LED Light Strip will start soon, with availability kicking off in February through both Eve's website the Apple Store. Pricing is comparable to other models on the market, running $79.95.

Encased in aluminum to match the other recent Eve products, this power outlet has three receptacles to plug in different devices. Each outlet can be controlled independently via HomeKit, or through the physical buttons on the device.

Besides as acting as a HomeKit controller, it also safeguards devices by protecting against power surges, overvoltage, and overcurrent.

It will ship slightly behind the Eve Light Strip, dropping in March for $119 through the same retail channels.

Both the Light strip and the Energy Strip can be automated to turn on and off at different times, or triggered through other HomeKit buttons or sensors.

AppleInsider will be attending the Las Vegas Consumer Electronics Show starting on January 8 through January 11 where we're expecting 5G devices, HomeKit, 8K monitors and more. Keep up with our coverage by downloading the AppleInsider app, and follow us on YouTube, Twitter @appleinsider and Facebook for live, late-breaking coverage. You can also check out our official Instagram account for exclusive photos throughout the event.
Sign In or Register to comment.