AppleInsider
Posted: January 7, 2019 2:01PM
in General Discussion
Mighton is helping home owners make more of their entryways part of their smart home network, by announcing the Avia as the first Apple HomeKit-compatible smart lock that can work with multipoint locking door systems. 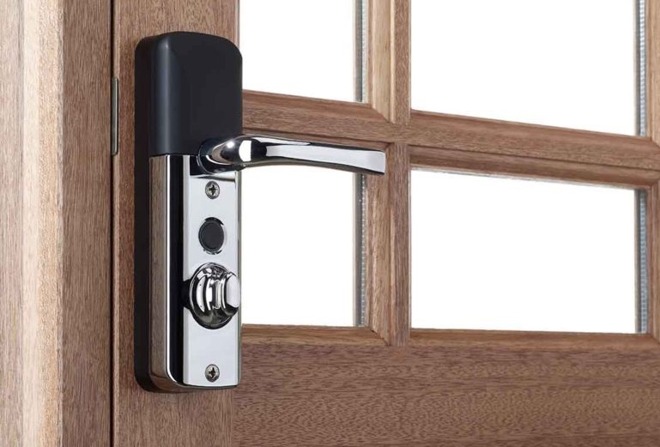 Introduced at CES, the Mighton Avia is specifically made for multipoint locking doors, rather than using a deadbolt or similar mechanism as used with other smart locks. Multipoint systems have many points where the door is locked, making it harder to break into compared to those just using a deadbolt, with the use of such doors said to be increasing in North America.

Able to be attached to most existing multipoint locking doors without any modifications as well as new doors, the Avia functions as part of the home's existing HomeKit network. This enables for iPhones, iPads, and the Apple Watch to control the lock via an active Internet connection or locally via Bluetooth, allowing the door to be remotely controlled for visitors to access while the homeowner is away.

The system also operates via a Bluetooth keyfob that can be activated when nearby to the door, a keypad for code-based entry, and a mechanical key override. Power is provided to the lock by four AA batteries.

Up to 10 users at a time can have access to the lock. It is also possible to send mobile keys to other people for use via their own smartphones, with the keys able to be temporary in use or disabled at a later time.

The design also allows for the use of different handles, including those produced by Avia in a variety of different finishes, or even to use the door's existing handle, in order to avoid drawing attention to a new smart lock installation.

Pricing for the Mighton Avia in the United States has yet to be announced, but it will be shipping via door and window specialist Roto North America in May.