AppleInsider
Posted: January 28, 2019 12:38PM
in iPad
The commissioner of the NHL and players from the Toronto Maple Leafs and Edmonton Oilers paid a visit to Apple Park on Thursday, speaking to employees about innovation and technology in sports, and the collaboration between the league and Apple. 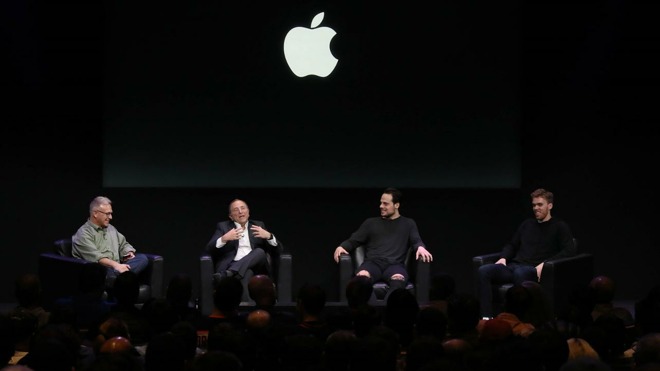 Occurring ahead of the 2019 NHL All-Star Weekend, NHL commissioner Gary Bettman, Edmonton Oilers center Connor McDavid, and Toronto Maple Leafs center Auston Matthews spoke on-stage with Apple senior vice president of worldwide marketing Phil Schiller. Around 300 Apple employees were in attendance, with the event also made available to view by employees located in other Apple campuses via a stream.

"We love the collaboration that we have with Apple," Bettman claimed. "It has helped transform the game without changing the game itself."

The commissioner is referring to the use of iPads by the teams that provides data to coaches and players on the benches. In 2017, coaches used iPad Pros and Macs during the Stanley Cup Playoffs, with real-time video streamed to iPads to give a closer look at the action on the ice.

Earlier in January, the league announced it was going to provide coaches with a custom app on an iPad Pro, one that would offer more than 60 real-time individual and team statistics during a game, so coaches could be more informed for their in-game decisions.

"I use it to prove to Hitch it wasn't my fault," McDavid joked, referring to discussions he has with coach Ken Hitchcock. Matthews claims he uses iPads to study the tendencies of opponents in face-offs, and that they are also used by the coaching team to advise on issues.

"Our assistant coach is coming up with the iPad telling us what we're doing wrong and stuff like that," advised Matthews.

"What these guys do and the other players in the league do every night on the ice is simply amazing, and to have the ability for players and coaches to get even greater insights into what's going on in the game, to make the adjustments that make a team more competitive and successful, is great," noted Bettman.