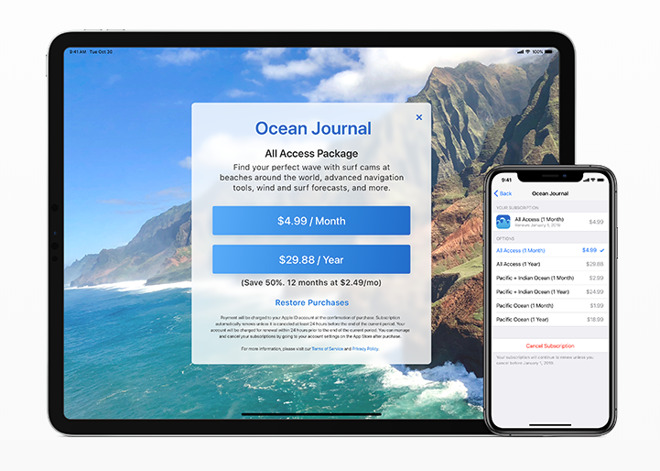 Apps must now clearly show monthly subscription prices, and downplay text highlighting what people might save based on their subscription term. Similarly free trial offers must identify how long they'll last, as well as the cost that kicks in once a trial ends.

The new guidelines include sample screenshots and modifiable sample text. Though not required, the company is also urging developers to let people manage subscriptions in-app, rather than force them to change settings in the App Store or iOS Settings.

While Apple's policies previously prohibited fraudulent subscriptions, some apps have still been guilty of things like repeated upgrade prompts and trials as short as three days. In other cases developers have been using outright deception, labeling subscription buttons with text like "Start" or "Continue" and minimizing disclaimers about what people are agreeing to, according to TechCrunch.

Subscriptions are inherently valuable to Apple's services income, since they generate a more dependable flow than one-time purchases. There's been a growing resistance to Apple's revenue cut however, which is normally 30 percent. That can fall to 15 percent, but only for in-app subscriptions active for at least a year.

Companies like Spotify and Netflix have already removed in-app subscription options, directing people to pay on the Web instead. Apple's cut has been described as unfair in the context of subscriptions since it collects money from content it doesn't produce or host.

The rules changes were first spotted by 9to5Mac.