AppleInsider
Posted: March 5, 2019 2:31AM
in General Discussion edited March 2019
A report on Monday delves into Apple CEO Tim Cook's lobbying efforts, both with officials in the White House and counterparts in China, detailing a series of deft moves that has kept Apple above the fray in the U.S.-China trade war. 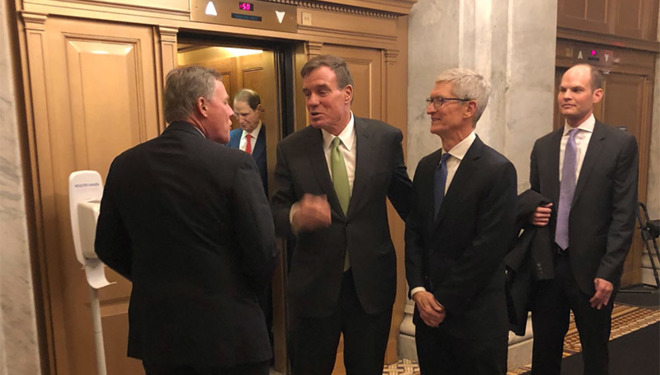 In a lengthy expos, Politico catalogs Apple's history with Trump, from Cook's first brush with the White House to the current situation that sees Apple largely unaffected by some $250 billion in trade sanctions levied against China. The report also touches on Cook's handling of the Chinese government to avoid backlash from U.S. policies.

While much of the report is rehash, for example it mentions Apple's refusal to back the 2016 GOP convention as a result of Trump's political leanings, it does shed new light on Cook's relationship with Trump and the president's closest confidants post-election.

Chronicling Cook's most recent moves, Politico notes the executive discussed trade with Trump in the Oval Office last April, then met with the president and first lady Melania Trump over dinner in August. Cook is also in contact with the upper echelons of Trump's inner circle, including economic adviser Larry Kudlow, and sat for lunch with Ivanka Trump and Jared Kushner in 2017.

Cook's willingness to meet one-on-one with Trump and company stands in stark contrast with other tech industry executives who prefer an arm's-length relationship with the president and his aides. The strategy gives Apple a measurable advantage, the report says, citing a Trump administration official.

"He'll take the meeting, and in some regards, take the risk," the official said. "A meeting with POTUS -- it's a pretty fluid environment. The risk paid off."

The Apple executive's approach is just as important as his readiness to meet with key players. In particular, Cook addresses officials as business peers.

"He says, You're a successful business guy, we know how hard this public policy stuff is, help me continue to run this successful American company,' and that appeals to them," the administration official said. "He's managed to forge relationships with senior folks and made a strong impression on them and it shows in some public policy choices that were made and were not made."

The report suggests Apple has directly benefitted from Cook's actions. When Trump imposed a tariff on $200 billion of Chinese goods last September, smartwatch and Bluetooth devices were among roughly 300 product lines pulled from the list at the behest of U.S. companies like Apple. The administration denies extending preferential treatment to individual companies.

Cook does not comment on what, exactly, is discussed in closed-door meetings with Trump and other White House aides officials, though the executive has consistently trumpeted a rosy outcome for Apple in the ongoing trade war. In February, he expressed optimism that the U.S. and China will soon reach a resolution over the contentious issue.

"Both sides are talking and I always think that is always the essential thing to reaching an agreement," Cook said in an interview. "It's in both parties' best interests to come together."

The comment arrived on the heels of news that Trump was mulling tariffs on an additional $267 billion worth of Chinese imports, goods that include Apple's flagship iPhone. If the round were to go through, analysts estimate iPhone prices would jump by up to $160 per device.