Apple's March Event: the future of TV, games and news

AppleInsider
Posted: March 18, 2019 12:05PM
in iPod + iTunes + AppleTV
To clarify where Apple is headed in television, it's useful to look back on what it's already done, and what it has intentionally avoided. 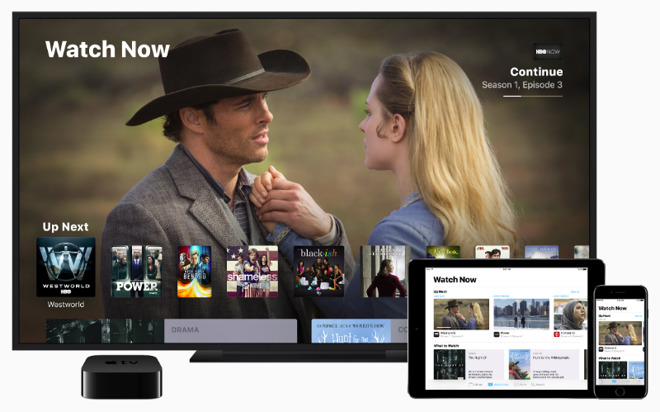 The idiot-boxing of Apple's TV strategies

Despite years of pundits-- lead by Gene Munster-- claiming Apple would get into the television set business or add a Tivo-like DVR to Apple TV, those predictions never materialized.

Munster has long been the pinnacle of wrong in his analysis of Apple and the television market, to the point where it is a widely recognized joke that Munster perpetually predicted that Apple would "ship a television that cost twice as much everyone else's, and make tons of money on it" any minute now.

Munster's predictions were not only wrong over and over, but farcically absurd and simplistically unsophisticated at the core, making him the perfect source for Bloomberg to cite in its own ridiculous hit piece mocking Apple TV as both a failure and, supposedly, "central to Apple's Services," a wildly delusional portrayal of where Apple's Services revenues actually come from (hint: it's not movie downloads).

Here's an accurate look at what Apple has actually done in television, and where it appears to be headed.

Apple first launched Apple TV at an event in 2006, similarly tag-lined "it's showtime." Originally that product was, effectively, an iPod for your television. You could wirelessly sync over music, photos, and video content from your Mac to the box for watching on the big screen.

It's almost hard to remember, but when Apple TV first shipped, Apple's entire TV strategy was playing out within iTunes 6, which had just introduced purchasing and viewing videos (starting with just a few TV shows from Disney, Pixar's short films and music videos). Viewing videos was largely aimed at the 5G iPod that provided an on-the-go way to watch content at arm's length.

Steve Jobs announced at the time, "We're doing for video what we've done for music-- we're making it easy and affordable to purchase and download, play on your computer, and take with you on your iPod." 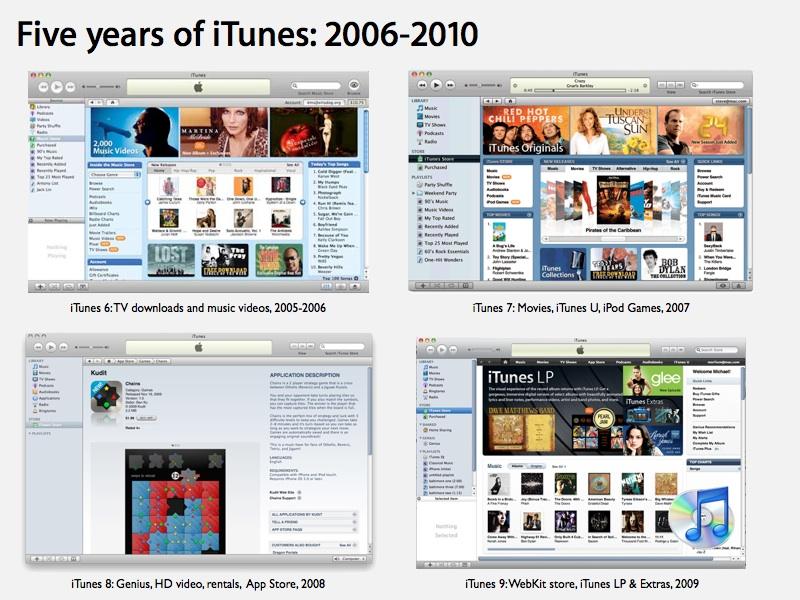 
Having developed the tech infrastructure, Apple also needed to line up more commercial content and more ways for users to actually watch iTunes video content. Macs had no problem playing videos, but sitting at a computer was not exactly competitive with relaxing in front of a living room TV.

Apple TV was intended primarily to serve that role, and it worked out a lot better than various efforts to ship a "converged" PC-TV hybrid. Rather than trying to be a computer, a television, a refrigerator, and a toaster, Apple TV simply aimed at bringing iTunes content to users' living rooms.

Apple continued to refer to Apple TV as a "hobby," particularly as its ambitions for the device were greatly overshadowed by the subsequent launch of the iPhone. Yet its development of technologies including AirPlay (a video expansion of the existing AirTunes music delivery protocol) and AirPlay Mirroring continued to make Apple TV more attractive as a product. 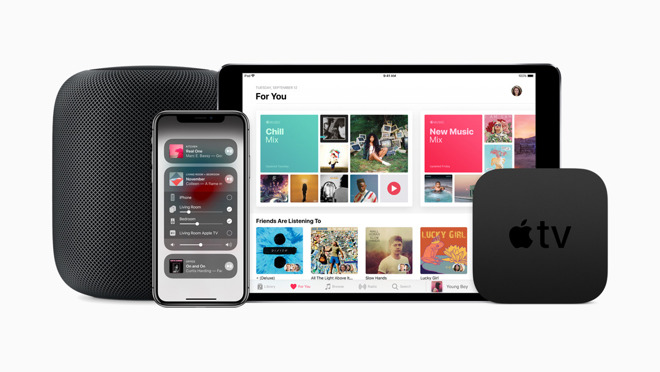 
Today's AirPlay 2 continues to enhance the capacity of Apple TV, HomePod and other compatible hardware to stream content to multiple speakers throughout the home. In licensing AirPlay 2 to a variety of other speaker makers and in its new partnerships with Samsung and other television makers, Apple is making its ecosystem the preferred way to deliver and manage audio throughout the home.

Other technologies developed for and financed by iOS devices, including HTTP Live Streaming, have similarly been used in Apple TV, resulting in an increasingly tight integration between Apple's platforms. This also makes it easy for broadcasters and other streaming vendors to target Macs, iOS and tvOS devices using the same technology.

A final aspect of Apple TV that is often overlooked is its role in enterprise applications. Apple TV is easy to manage and customize for use in education, healthcare, hospitality, and corporate conference rooms, featuring easy to use streaming and mirroring and supporting custom enterprise apps. 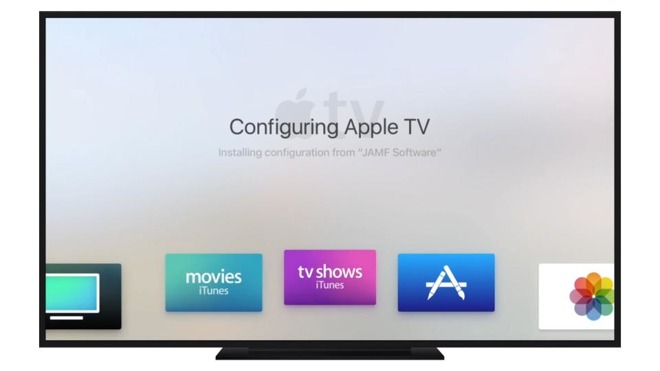 
While it officially launched before iPhone, Apple TV didn't get its own App Store until much later: 2015, at the launch of tvOS. Until then, the only store for Apple TV was iTunes. Before rushing to put third-party apps on television, Apple pursued a much bigger opportunity presented by iPad, its other television.

Initially mocked as being "a big iPod touch" by people who couldn't see its potential, Apple initially worked to position the iPad as a portable computer. The first apps it showed for iPad in 2010 were its own free Pages and Keynote titles, which clearly benefited from running on an iOS device bigger than iPhone.

Today, there is some historical revisionism that suggests Jobs saw iPad as little more than a digital magazine and therefore was a failure along with iPad for not "saving journalism." That's simply false. Our exhaustive review of the original iPad made it clear that iPad was a positioned as an ultra-mobile computer, not a digital periodical reader.

Almost two years after iPad's introduction, at the end of 2011, Apple launched Newsstand as an effort to enhance subscription journalism content to the iPad. That failed for a number of reasons, in part because many content publishers tried to scrape their existing, failed Adobe Flash-based digital media efforts into the market Apple created for them, resulting in a poor experience that turned off readers. 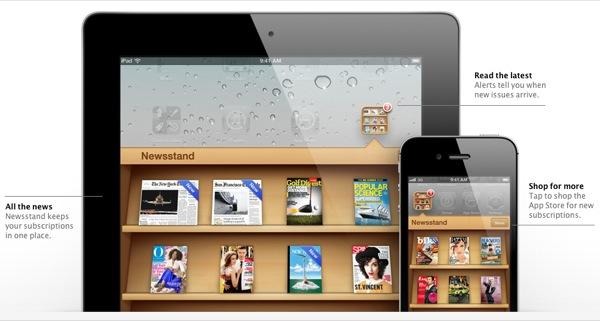 
Further, as with TV series and channels, there are so many magazine subscriptions to choose from that it grows overwhelming and expensive to try paying for each one individually. To address that issue on the TV side, Apple created its TV app, designed to serve as a navigation point for viewing the shows you find interesting, rather than having them all scattered across various apps and subscription services.

The TV app launched across both iOS and tvOS, creating a familiar, cloud-synced way to manage various options to watch. Over the past decade, it's become obvious that iPad and other tablets were overhyped in their potential to "save newspapers," yet under-appreciated in their role as a new class of sophisticated portable televisions.

In fact, most Android tablets were sold and used as passive portable TVs. Now that big phones can serve that role, Android tablets have collapsed. Apple stabilized its iPad business by developing it as a real computing platform capable of running tablet-optimized apps and games and giving it other specialized uses that big phones can't replace. That's something Google's Android and Microsoft Windows never really accomplished.

After developing its own TV app, Apple last year acquired Texture, an app that provides package access to a variety of magazines with featured content curation and a consistent user interface. Apple's earlier Newsstand was simply a folder of disparate apps that each sold subscription content. 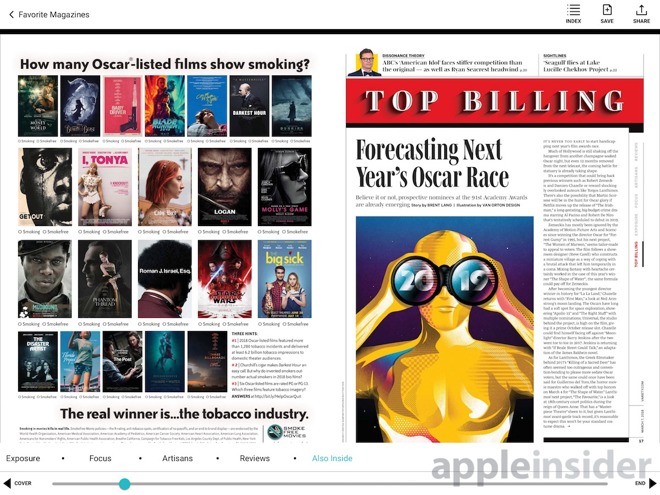 With its Texture and TV apps, Apple appears poised to launch new services that bundle content from lots of "apps" into a single subscription choice, putting one price on all the content a user can enjoy. This is the same model as Apple Music, which pays out content creators per song streamed.

Beyond music, TV, and magazines, Apple is likely to also create a similar subscription for games, allowing players to pay an ongoing fee to access a library of interactive content. This addresses issues with the visibility of individual downloads, keeps users up-to-date with the latest content being created, simplifies the payment structure, and pays out creators in a system of meritocracy.

Once users are subscribed, they'll prefer to buy Apple hardware that works with their subscriptions, the same way that iOS, Keynote, and OS features like Messages help to keep Apple's ecosystems sticky and its own hardware more attractive than less functional commodity devices, even at a premium price.

Just as iTunes created a role for Apple TV and Apple Music created a reason to buy HomePod, there are additional hardware form factors that could erupt from the expansion of Apple's Walled Garden of new subscription services. 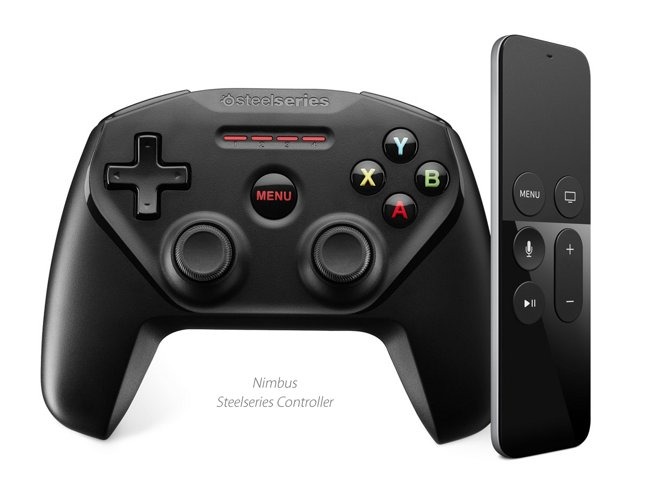 
If Apple can establish Apple TV as a real gaming console and not just a place for simple mobile apps trying to sell In-App Purchases, it will have an ideal foundation for launching Augmented Reality gaming and Virtual Reality experiences using new wireless hardware mounted on your face.

And while some have speculated that Apple might shrink down HomePod into a cheaper speaker, it's more likely that Apple would deliver a slimmed down version of its A10X-powered Apple TV hardware to work like a HomePod without a speaker. That would retain HomePod's position as a premium speaker while expanding its tech in new ways.

Such a product offering would effectively be a cheap wireless AirPlay 2 streamer that listens for Hey Siri commands and outputs audio to existing speakers, controls connected light fixtures, and can be used to monitor rooms in your house for things like air quality and movement.

A cost effective "HomePod nano" (or "Apple Radio") could be used to expand Siri and HomeKit functionality throughout the home without needing the 4K video or 4-inch speaker hardware that contributes much of the cost in Apple TV and HomePod, respectively.

Apple's focus for next Monday's event appears to be on its new subscription services. Stay tuned for AppleInsider coverage and share your thoughts in the comments below.