AppleInsider
Posted: April 20, 2019 1:23PM
in General Discussion edited October 2020
You can record your podcast on your iPhone, but what you might not be able to do so easily is make sure that the audio sounds good. Buying a broadcast-quality microphone or a separate audio recorder can bring your podcasting up a level, and there is some hardware that we like. 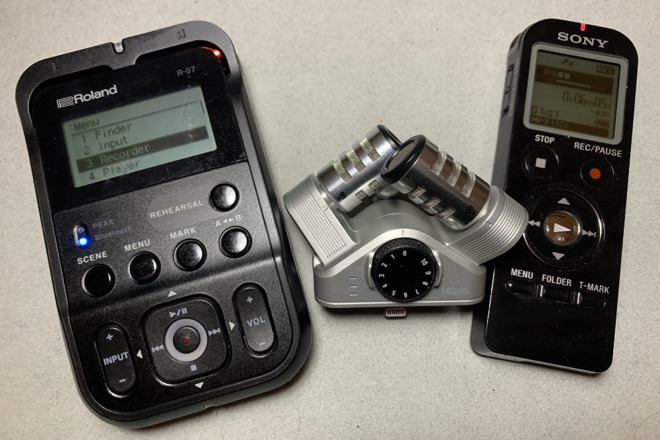 If you're recording an audio or video podcast, you do already have all the equipment you need right there in your iPhone. The sound quality is good, the video is excellent, you're ready to make a podcast. Except that this good microphone is little use when there are two of you speaking. And the video may be brilliant but while you're filming with that, the iPhone's microphone is completely pointing away from you.

One solution is to hire a crew to record the podcast audio and video for you while you concentrate on the script and the presentation, but that's expensive.

There may well be times when that's your best option, but for most podcasts, you will be better off spending money on equipment instead. Maybe it'll take you time to learn how to get the most out of it, and maybe the equipment isn't exactly cheap, but it's something you'll buy once and use forever. 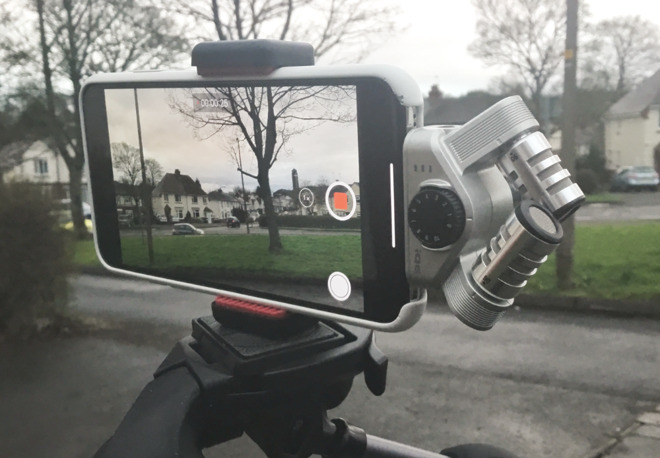 As good as the Zoom iQ6 is, its Lightning connector means it is only going to record audio to the side of what you're filming

Okay, it's too strong a word to say that you need this. Once you've used more than your built-in iPhone mic, though, you'll not want to go back. There are BBC Radio professionals who swear by broadcast-quality microphones that you plug into your iPhone's Lightning port.

The prompt for this piece was in part because of a recommendation by BBC Radio 4 producers in the UK. However, it was also prompted by the release of the Roland R-07 audio recorder which is being specifically marketed for podcasters. This is a handheld recorder with stereo microphones and the retail price is $230 but a typical street price is $196.

We compared that with what's been a stalwart recorder for us, the old Sony ICD-UX533. That's still available used for around $120 but if we were buying it today, we'd get the updated ICD-UX560 which is $80.

Then we also tried that BBC Radio producers' choice, the Zoom iQ6 which plugs its stereo microphones into the Lightning port of your iPhone and costs $99.

And lastly, to give a baseline comparison, we went completely the other way. Instead of an iPhone with different mics and audio apps, we recorded on a Mac. We used macOS's free QuickTime Player and we recorded using a Blue Yeti microphone. 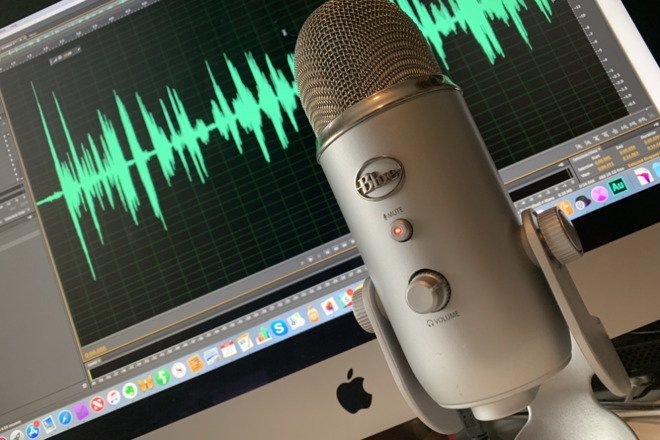 A Blue Yeti microphone in front of a Mac

Strictly speaking, the Roland R-07 is also aimed at musicians and comes with extra ports for connecting instruments or microphones to it, but to explore this for podcasting, we stuck to voice recording. With all of these devices switched on and recording simultaneously, we did a podcast.

For utter convenience and speed, the Mac's QuickTime Player and a Blue Yeti microphone win out over everything. The audio quality is excellent if you record in ideal conditions, such as in a soundproof room or with little extraneous noise.

Then, too, if you're recording a podcast with someone else, you can use a Mac app such as Rogue Amoeba's Audio Hijack to simultaneously record both your microphone and the Skype, FaceTime Audio, Slack or Discord conversation.

This means you end up with multiple tracks and they all sound good. You can finish the recording and be sending the audio off to your editor immediately. Whether that's you or someone else, the editor may well have to do some work cleaning up the audio but otherwise this is a simple, fast workflow. You go from recording to having the files ready immediately. 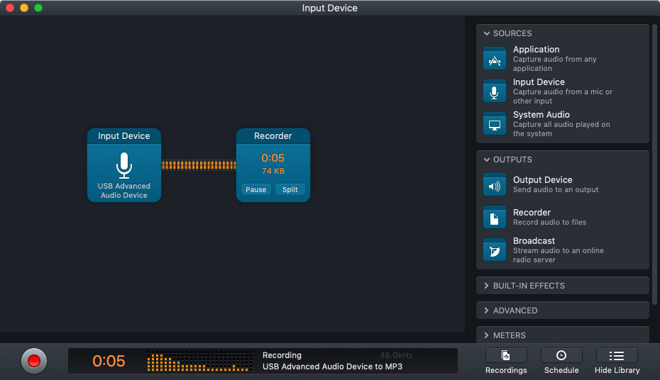 You don't get that with any other option when you're recording on an iPhone. Even if you use the built-in microphone, you still have to record in an app such as Apple's Voice Memos, and then get that audio off the phone.

Take a look at our four simultaneous recordings being edited together. For the most part, you'd be pressed to see a difference. There are some but overall the quality of all our options was the same.

Subjectively, we liked the Roland and the Sony audio recorders better than we did the Zoom iQ6 audio quality. Plus that Zoom proved the hardest to set up. There's only a single Gain control on the device but it took very fine adjustments to get clear audio without picking up a lot of extra noise. 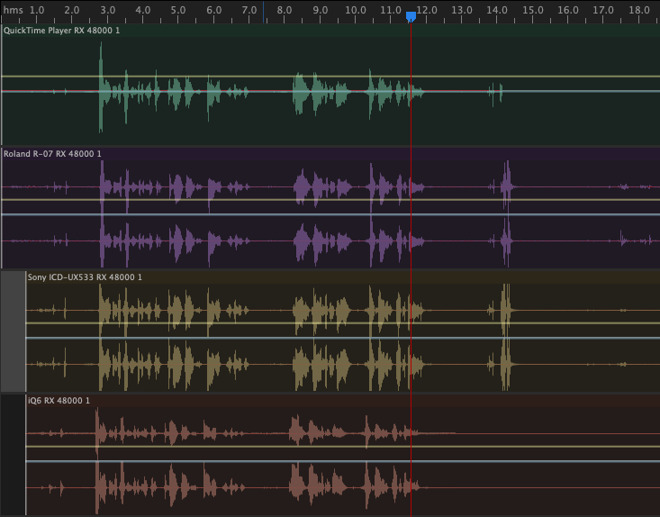 We did get the clear audio, though, and none of this is going to work well if you hope to just plug it in and start recording. All of the devices benefit from you trying out their different options.

Plus the Zoom, while plugging into your iPhone's Lightning port, comes with a regular headphone jack. It's an expensive way to add back wired headphones to your iPhone, but for monitoring the recording as you experiment, it's good.

Each of the devices we used -- including the Blue Yeti -- have a headphone jack, and the audio quality was the same. What makes the difference in which will be best for you and your podcast comes down to physical form.

The Zoom iQ6 is the smallest unit, coming with stereo microphones angled away from each other to give the maximum recording coverage. It's wide, however, and so much so that you can't rest an iPhone flat on a table when it's plugged in. You have to prop the phone up, but then because that encourages you to more carefully direct and position the microphone, you get better recordings.

The Sony ICD-UX533, and its later versions, are the slimmest. It's powered by one AAA battery, and depending on the settings you choose, it will record for between 22 and 30 hours. Those recordings are kept on internal 4GB storage.

In comparison, the Roland R-07 uses two AA batteries and gets something in the order of 16 hours of recording. However, its recordings are stored on micro-SD cards, so you can have as much storage as you have cards. The one provided with ours was 8GB.

It's not as easy swapping out micro-SD cards as it could be. There's a protective flap but when trying to change cards, we still managed to make the provided spring out of the unit and go across the room.

You can put Roland's micro-SD card into a reader and take the audio off that. You can also, though, plug one end of a USB cable into the unit and the other into your Mac. It appears as an external drive and you can just drag the audio off.

Roland specifies that not all USB cables will work, though. You can't use one that's made just for charging, it has to be built for data transfer too. In practice, there's no way to tell if you've got the right cable until you try it. Yet once we got one that worked, we just kept it with the Roland R-07 that we always knew we could remove the audio.

The Sony ICD-UX533 has a more direct method for getting audio off. It's as if it has a flick-USB connector. You press up on a control and a full-size USB connector pops out of the unit.

Without question, that is by far the handiest and the fastest way to get audio off a recorder and onto your Mac -- so long as it fits. Even though it's slim, the Sony recorder is a lot thicker than a USB cable and this connector is literally just the connector. There's no cable run. So as handy as it is, you can find that you struggle to get the connector into that socket on the back of your Mac mini.

There's no need for any physical connection with the Zoom iQ6 as it's already connected to your iPhone and is storing audio in whatever app you use there. You can get iOS audio recording apps that are built for the Zoom but Apple's own Voice Memos is as good and is substantially easier to use.

This all makes the Zoom good for when you're recording an audio source that's near you and your phone. Both the Sony and the Roland can be placed nearer your interviewee, or your musical instruments.

Roland's unit wins here, though, because it also comes with an app -- a remote control one. With that software installed, you can pair up to four R-07 recorders with your phone and then control all of them. 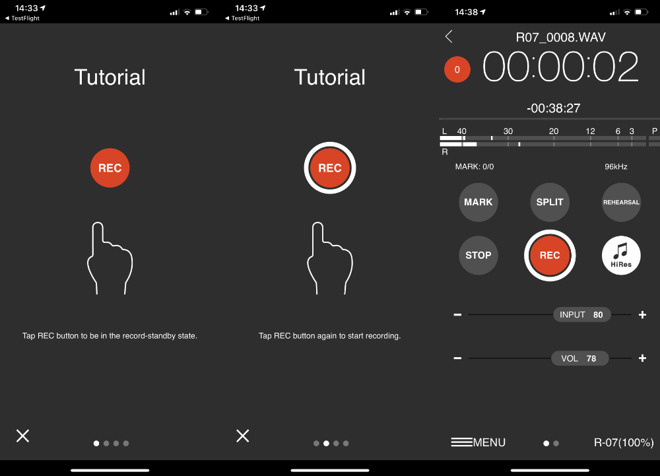 It's a superb app. If you're used to recording, then you know the fear of not having started the recorder or of something going wrong. With this remote control Roland app, you can start the recording when you're ready and you can always see the status of that

This isn't a case of taking several devices and saying one is the best. It's a case of saying that there are times when different solutions are right for you.

So the next time we're in a BBC studio, you can bet we'll use the Zoom. Next time we're going to do an interview for print rather than podcast, we'll slip the Sony ICD-UX533 in our pockets the way we have for years.

And when we want to do a more substantial recording, such as broadcast quality for a podcast or the audio for a video, we'll use the Roland R-07.