AppleInsider
Posted: May 1, 2019 10:33AM
in General Discussion edited December 2019
ING bank has announced on Twitter and its official site that Apple Pay functionality will be coming to the Netherlands shortly. 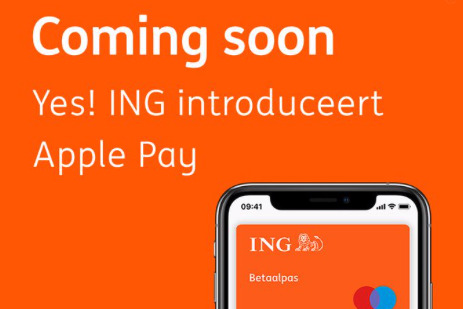 Dutch bank ING has officially announced that it will be supporting Apple Pay soon. There's still no date, but this is the first time a Netherlands bank has stated its support. That's despite several years of rumors and leaked screenshots showing different banks undertaking trials.

As well as posting on Twitter, ING's Dutch-language website, though not the English version, announced the move with the words "Yes! ING introduceert Apple Pay."

"Soon you can pay with your Apple Device, such as your iPhone, iPad or Apple Watch," says the site in translation. "Great, you always have it with you! So never search for your wallet again. We will keep you informed on this page and via social media. And when the time comes, you will receive a message in the Mobile Banking App."

The news comes after Tim Cook announced Apple Pay expansion in the company's latest financial earnings call. "Apple Pay is now available in 30 markets and we expect to be live in 40 markets by the end of the year," he said. "Apple Pay transaction volume more than doubled year over year and we're on track to reach 10 billion transactions this calendar year."

It's now almost five years since Apple Pay launched in the US. The Netherlands was first rumored to be getting the service late in 2017.

Alongside multiple sources claiming that ING would be launching Apple Pay in the Netherlands, AppleInsider was sent photos of an iPhone showing PKO Bank Polski testing Apple Pay in house. All indications were of a number of European countries about to support Apple Pay but while Poland ultimately launched it in June 2018, the Netherlands has been holding out for unknown reasons.