AppleInsider
Posted: May 15, 2019 2:06PM
in iPhone
Apple is promoting its production of a number of iPhone models in India, with the start of a new marketing campaign for the iPhone 6S in the region sold with the tagline "Now made in India," in reference to the government's initiative to encourage local manufacturing. 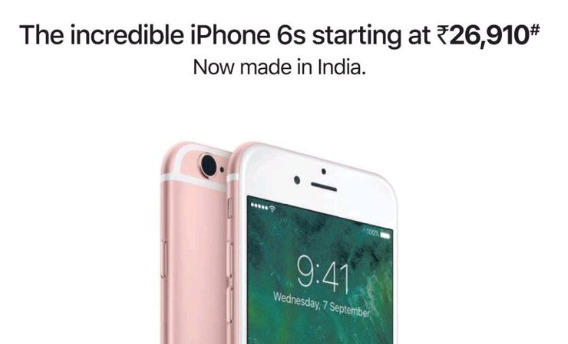 A market that Apple is finding hard to penetrate but is continuing to work on, India has been an unusual country of interest for the company, as it specifically started assembly of some iPhone models in the country specifically for the local market. A new round of advertising suggests Apple is now starting to lean on local production to try and encourage more sales.

An advertisement for the "incredible iPhone 6s" found by Varun Krishnan markets the model advising it is "Now made in India." As part of the same ad copy, potential customers are advised of cashback on HDFC Bank debit and credit cards, presumably if used to purchase the model.

Just saw this ad , Apple is explicitly promoting made in India pic.twitter.com/OpjClRJAhs

The reference to "Made in India" is likely to be on purpose, as it is the name of the Indian government's initiative to try and pressure companies into producing products locally, instead of relying on imports.

Using manufacturing partner Wistron, Apple has produced the iPhone 6S in India since 2018 and the iPhone SE since 2017, and has expanded to include the iPhone 7 for local sale. Current plans include tapping Foxconn for a trial run of production for the iPhone X, which may be a precursor to manufacturing the 2019 iPhones in the market.