AppleInsider
Posted: May 29, 2019 12:55AM
in General Discussion edited May 2019
A searing article that lambasted Apple over the "disposability" of its hugely popular AirPods earbuds seemingly struck a nerve. The company recently agreed to speak publicly on the matter and in doing so revealed details about its AirPods recycling program, which costs recyclers more to process than can be extracted from the device. 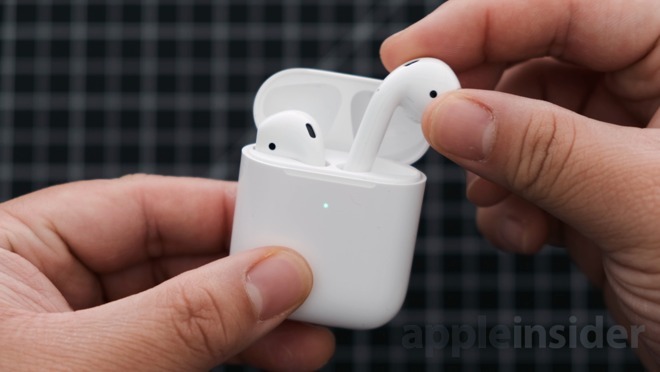 In early May, Motherboard ran a scathing critique of AirPods, focusing in large part on its environmental impact as a "disposable" device. The article called Apple out for marketing a product design that seemingly runs counter to the company's well-groomed, eco-conscious public image.

Like other Apple products, AirPods are not designed to be user serviceable. Sensitive circuitry is protected by a nearly impenetrable outer shell and held together with gobs of glue, but owners looking to keep the device functional will inevitably require a replacement for its diminutive Lithium-ion battery.

AirPods' lifespan is something of a mixed bag. Depending on use, some find the earbuds last years with only minimal battery degradation, but AppleInsider testing found a pair of first-generation AirPods lost half its battery life in two years.

Speaking with OneZero, Apple did not deny that AirPods are nearly impossible to repair or that they contain batteries that degrade over time. In a report on Tuesday, the publication, distributed through Medium, said Apple took umbrage to reports characterizing those issues as specific to AirPods or that the device is somehow a worse environmental offender than larger electronics.

Apple made a point to mention its recycling program, which has accepted AirPods since the product's inception in 2016.

"As with all of our products, we work closely with our recyclers to ensure AirPods are properly recycled and provide support to recyclers outside of our supply chain as well," Apple said in a statement.

In another rare move, Apple agreed to connect OneZero with Wistron GreenTech, one of the company's recycling partners. A Wistron representative said AirPods' design requires disassembly by human workers using hand tools, a laborious process that removes critical components -- the battery and audio drivers -- from the polycarbonate shell. The battery and drivers are sent to smelters and metal refiners, respectively, to extract valuable material like cobalt.

Wistron confirmed that the value of materials gleaned from recycling AirPods does not cover the cost of processing, saying Apple pays the firm, and presumably other contracted partners, to make up the difference. Apple said it is working on streamlining the recycling process for AirPods and other products, suggesting out-of-network recyclers might one day be able to accept AirPods without financial backing from the tech giant.

Users interested in recycling their AirPods can take the device in to Apple or request a free shipment label through the company's Trade In webpage. Unlike other Apple products, there is currently no incentive to recycling AirPods beyond peace of mind.