Review: The Zendure Passport GO is the most capable world travel adapter yet

AppleInsider
Posted: May 29, 2019 2:33PM
in General Discussion edited January 21
The Passport GO is a new world charger that offers up a auto-resetting fuse, 30W USB-C, and is the first with Gallium Nitride technology. 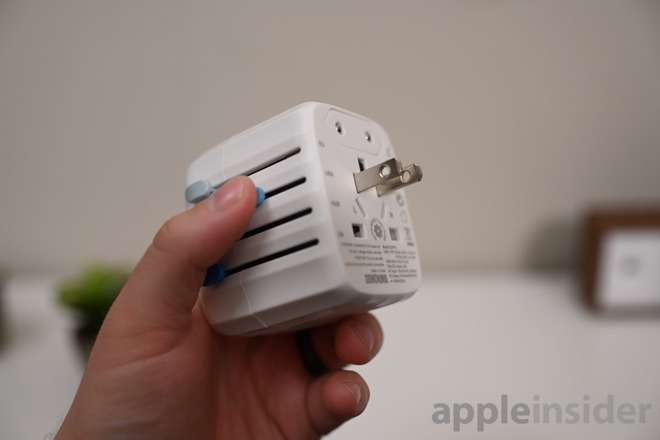 Zendure is back with yet another Kickstarter campaign this time for its Passport Pro successor, the Passport GO. This time they've improved on several of the key features while retaining the compact design.

At its most simple, the Passport GO is a power adapter with four retractable power adapters that work in over 200 countries worldwide. Simple use your thumb to extend the slider on the appropriate plug to have them extend from the end and insert it into the receptacle. All your gear can be charged over USB or AC.

Even though this device is small, there is a lot going on. Let's tackle the sides one at a time. 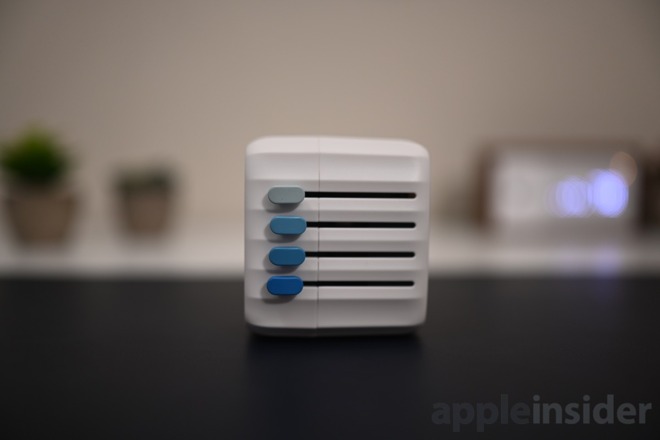 First, is the side with all of these sliders. Each of these sliders is used to extend one of the four world adapters from the wall-facing end. There are no designators next the sliders -- text would likely mar the otherwise nice design -- and instead, are relegated to be on the wall-facing side so they don't get seen when you don't need to glance at them.

All the chargers are unique so it isn't likely you will struggle knowing which one to extend. Just match the hole with the adapter and you are set. Should be obvious, but only one of the adapters can be extended at once. That also means they all need to be completely back before they can be extended. A few times when testing we had one of the adapters almost all the way retracted, but not entirely, and it prevented another from opening. 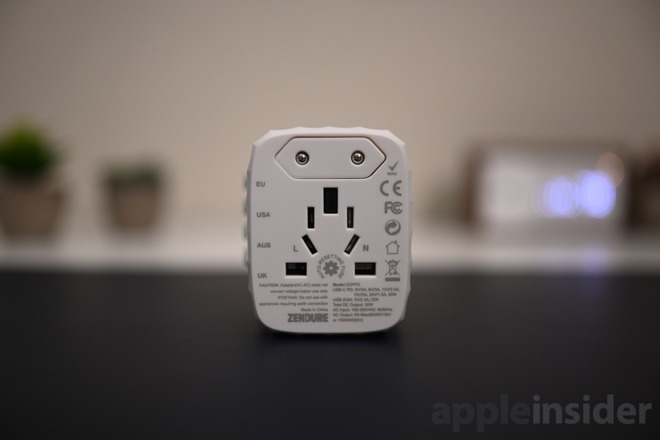 Rotating the device around to the actual adapters, it looks like a mess of different shaped holes on the back of the plug. The left side has the series of labels for each of the adapters and sliders we mentioned before. When not in use, all adapters are completely retracted for easy storage. It is also home to all sorts of requisite regulatory labels. 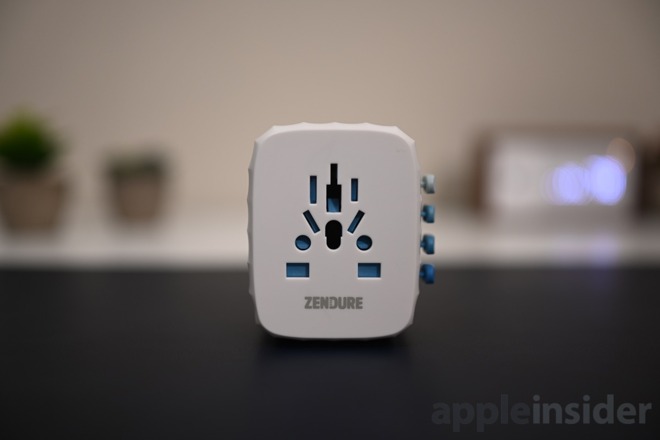 On the front -- the side opposite the wall when plugged in -- has a similar set of holes as the wall-facing side, though these are meant to be outlets for your devices to plug into rather than for the plugs to come out. That lets you plug in your laptop or any other high-powered electronics wherever you are.

That just leaves the bottom of the device which has the series of USB ports. There are a total of four USB ports -- three USB-A and a single USB-C. The USB-C port is capable of 30W of power -- up from 18W on the Passport Pro -- and each USB-A is capable of 12W. The Passport GO can't power all four of those ports at full speed so if you have all connected at once you will see the charging speed decrease, but overall they deliver quite a lot of power and most devices won't be so power hungry. 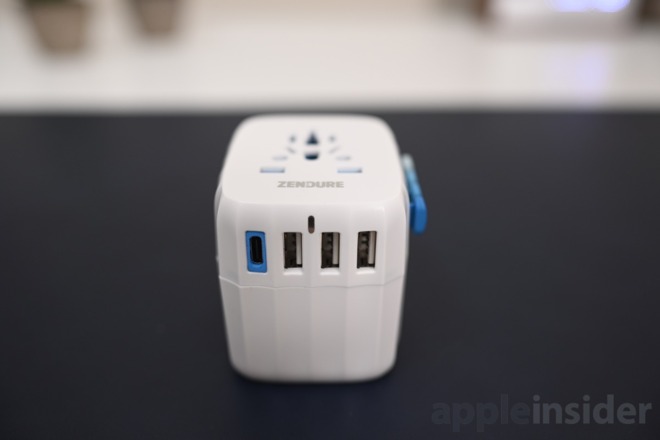 USB-A will serve small devices like the Apple Watch, headphones, fitness trackers, etc just right while the 30W USB-C can handle fast charging the latest iPhones, the iPad Pro, or even any USB-C portable Mac.

We this all the time with other world travel adapters. You take it abroad, plug something in and accidentally blow a fuse in the adapter. Now you are left with either replacing the fuse yourself or beginning the search for a new charger.

Zendure uses an auto-resetting fuse that never needs replaced. If it should trip, it will automatically reset itself in roughly a minute and have you up and going again.

GaN, or Gallium Nitride, is something you will start to see more and more in the marketplace. It is a new semiconductor material that looks to displace silicon with higher efficiency and less heat, not to mention the higher current tolerance. 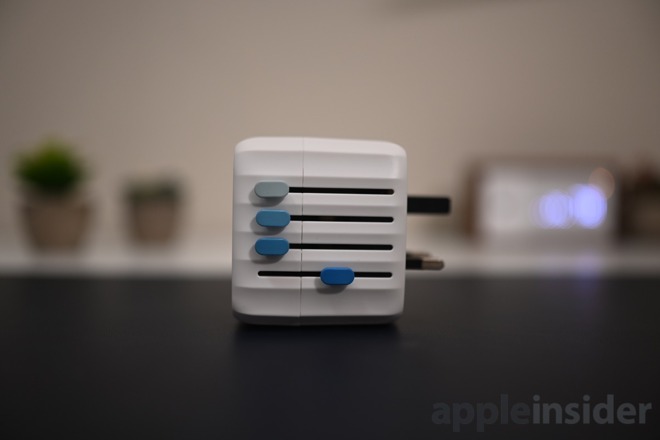 It is thanks to GaN that the form factor is able to stay so small and still deliver 30W of power. If relying on silicon, then the Passport GO would have to be a bit bulkier. Apple's 30W adapter is smaller than the Passport GO but there is so much other tech built into this that it is quite impressive.

The added efficiency also means less power is wasted. While the actual savings would be very small, it is still worth noting.

More and more chargers are taking advantage of this emerging tech and will be showing up more and more in popular chargers. 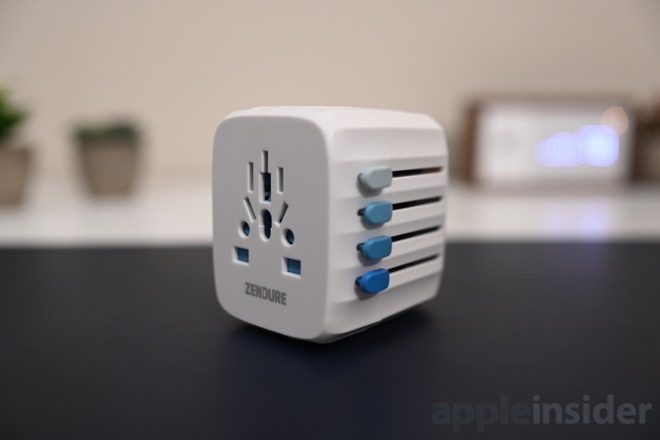 If you travel outside the country frequently, or even just once or twice, a travel adapter is necessary. The Passport GO is the best adapter we've found thus far and tackles the issues we have most commonly such as the number of outputs, an auto-resetting fuse, the speed, and the size.

Our only change we'd like to see for the next iteration is more USB-C rather than USB-A. Likely the reason for only one USB-C is due to the power requirements of this new standard.

The Zendure Passport GO is currently being funded on Kickstarter. Users can back the project for the super early bird price of $29 for the Passport GO.

Just a quick reminder, Kickstarter is a crowdfunding platform and you are backing a project and not placing an order. There is no guarantee that Zendure will come through in shipping the Passport GO. That said, Zendure is a well-respected company that has gone through the Kickstarter process several times and has always delivered its products in a timely fashion.

Previously we covered the Zendure SuperTank and SuperPort 4 which were successfully funded on Kickstarter and now shipping to backers.