AppleInsider
Posted: June 3, 2019 12:31PM
in iOS
Apple is promoting the winners of its WWDC 2019 Scholarships in the App Store, with a story in the digital marketplace listing both the winners and the apps they created, in order for attendees to see for themselves what the scholarship winners can produce. 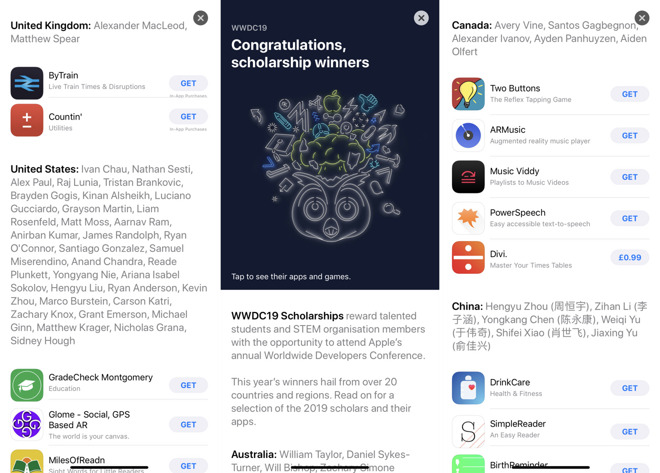 Appearing in the App Store as a story featuring the "exploding" owl head graphic and the title "Congratulations, scholarship winners," the posting explains how students and STEM organization members were offered the opportunity to attend Apple's annual Worldwide Developers Conference.

For 2019, the winners are from over 20 countries and regions, listed by country with their names followed by apps each group of individuals created. Out of the 20 countries, the United States has the most apps listed, taking 20 spots, followed closely by Brazil with 18.

Scholarship applicants had until March 24 to apply, with winners acquiring a ticket to WWDC itself, as well as lodging for the trip and a free year of membership in the Apple Developer Program. Unlike winners of the main ticket lottery, scholarship participants won't have to pay the $1,599 ticket price.