AppleInsider
Posted: June 7, 2019 7:51PM
in Apple Watch
Apple will be launching an "Apple Watch Limited Grant Program" later in 2019 to help institutions wanting to use the ResearchKit and CareKit frameworks, among a series of changes to the platforms designed to encourage more health research to be performed. 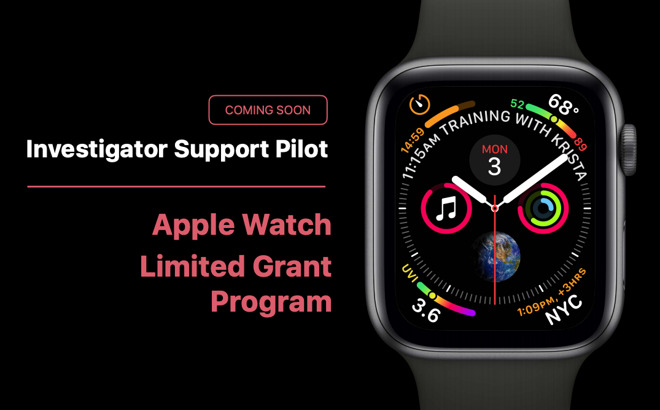 Announced during the "ResearchKit and CareKit Reimagined" session at WWDC 2019, Apple software engineer Srinath Tupil Muralidharan advised Apple regularly received questions from researchers about how to get started with the platforms. In some cases, Apple was also offered proposals from research institutions that asked for hardware grants.

For 2019, Apple is launching the "Apple Watch Limited Grant Program," part of an Investigator Support Pilot being developed by the iPhone maker. Live in the fall, the program will reportedly include a simple submission process, and will prioritize studies that "advance science and help people to live healthier lives by leveraging" the Apple ecosystem.

The program arrives along with numerous changes to both the ResearchKit and CareKit platforms.

ResearchKit will gain changes to the user interface, including elements such as an updated progress indicator, "Learn More" buttons, an increased use of content images, and other questionnaire changes. There are also new items relating to visual acuity and contrast sensitivity, including the Landolt C Acuity Task, Tumbling E, and the Gabor Patch, which take advantage of the TrueDepth camera to make sure the user is the correct distance from the screen.

Updates to the speech and hearing tasks are also included, checking items such as jitter and shimmer in a person's voice and tone audiometry.

CareKit has been updated to version 2.0, which brings with it a new user interface.

The updated SDKs for ResearchKit and CareKit are now available on GitHub, with a stable release expected by September.