AppleInsider
Posted: June 17, 2019 10:39AM
in General Discussion edited June 2019
Hollywood sources say that Apple is approaching Oscar contending filmmakers and offering $5 million to $30 million per project, to build an award-winning stable of content. 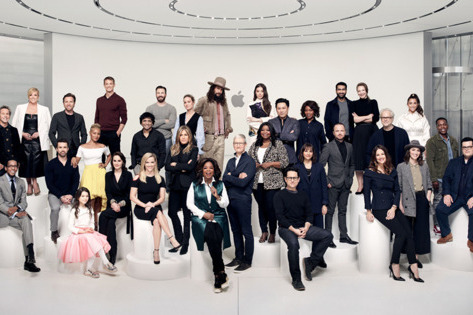 Apple is looking to produce half a dozen low-budget films per year, for its Apple TV+ service, which have the potential to be worthy of Oscar nominations, according to sources in Hollywood. The company has been targeting what the sources describe as "elevated" directors and other filmmakers, and offering them budgets of between $5 million and $30 million per film.

"They are taking meetings and hiring," once source told the New York Post.

The source compared Apple's move to being to create films like those of Focus Features, which made "BlacKkKlansman", "Boy Erased" and "Dallas Buyers Club." It's not known whether any deals have yet been made, but the same source says that Hollywood is not impressed with Apple.

"They are literally anxious and clueless about what they really want to do," said the Hollywood insider. "Half the [Apple] culture hates them making content, and the other half wants to meet stars."

The New York Post claims that Apple has the problem that it lacks a library of existing material where rival Disney is replete with old films and TV.

Analyst Dan Ives said that he expects Apple will eventually have to buy some studio's library.

One issue that may be making studios and filmmakers less keen on reaching all Apple users, however, is how Apple is allegedly trying to micro-manage projects.

"Tim Cook is giving notes and getting involved," one producer told the Post. "They are making big changes, firing and hiring new writers. There's a lack of clarity on what they want."

Reportedly one of Tim Cook's repeated notes given to producers is "Don't be so mean!" and Apple seemingly wants only positive views of technology.

Any library or new project will be shown on the Apple TV+ service, which means it could reach everyone with an Apple device. As shown at its March 2019 sneak peek, Apple already has many new dramas and comedies in production, including "For All Mankind" by Ronald D. Moore plus Oprah Winfrey documentaries.