AppleInsider
Posted: June 18, 2019 2:19AM
in iOS
The second beta version of Apple's upcoming iOS 13 operating system displays a warning screen when users attempt to delete an app tied to an active subscription, a mechanic that will help put an end to surprise monthly fees. 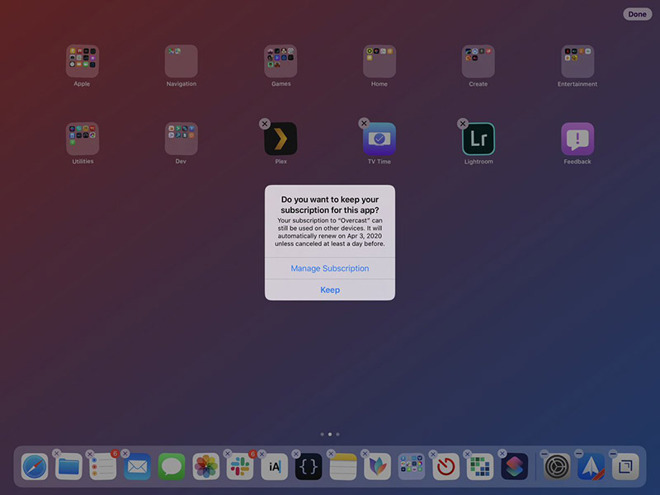 In iOS 13 beta 2, attempting to delete an app with a currently active subscription invokes a pop-up alert that requires user interaction before the command is complete.

The interactive alert contains two options. Users can tap a "Manage Subscription" button to modify or cancel their monthly agreement via the -- somewhat hidden -- Apple ID settings menu, while a second "Keep" button continues the subscription for use on other devices.

Apple presents information about the active subscription in the alert box, including its renewal date and whether the accompanying app can be used on other devices.

"Do you want to keep your subscription for this app?" the alert text reads in iOS 13 beta 2. "Your subscription to [app name] can still be used on other devices. It will automatically renew on [date] unless canceled at least a day before."

The new alert was spotted by MacStories' Federico Viticci on Monday.

The pop-up warning could alleviate billing issues or unexpected fees. Currently, apps tied to subscriptions can be easily deleted while the attached monthly agreement to remains in effect. Those not versed in App Store billing might assume deleting an app also ends its subscription, while others might not remember that they entered into an recurring agreement.

As it pushes developers to adopt a sustaining subscription model, Apple is also looking to combat existing problems with the fee structure. Earlier this year, the company introduced new App Store rules in an effort to prevent developers from "tricking" users into signing up for recurring subscriptions.