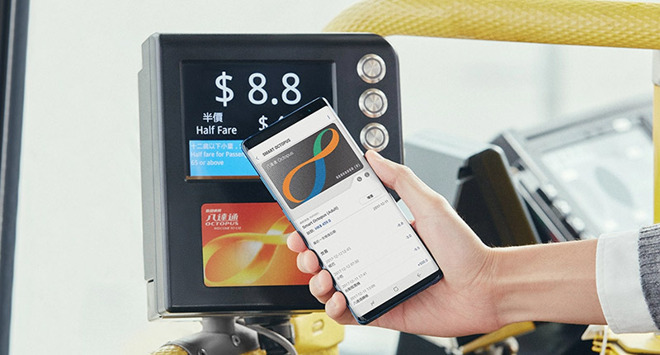 Apple Watch is not yet supported, with Apple's server showing a minimum supported watchOS value of "999.0," though that could change as the company continues work on watchOS 6.

Launched in 1997, Octopus card was the second contactless "smart card" to hit the consumer market and is considered a forebear of modern reloadable electronic payment solutions. Initially marketed as a physical tap-to-pay card, Octopus expanded to smartphones with Smart Octopus for Samsung Pay in 2017.

Since it is based on the FeliCa standard, Smart Octopus is technically compatible with iPhone 7 and newer Apple devices, though an exclusivity agreement has so far kept the payment platform restricted to Samsung handsets. That could change this fall with the launch of iOS 13.

Initially developed by Sony as an RFID chip solution, FeliCa was later hybridized for cellphone use with the cooperation of Japan's leading cellular provider NTT Docomo. That version, called Mobile FeliCa, served as the basis of Apple's NFC Type-F implementation in iPhone and Apple Watch, and ultimately Apple Pay integration with Japan's Suica mobile transit card system in 2016.

According to Ata Distance, Octopus' Apple Pay device profile is identical to that of Suica, meaning users can generate and manage new cards without leaving the Wallet app on Japanese market iPhone 7 and 7 Plus models, and all iPhone 8 and 8 Plus, iPhone X, iPhone XS and XS Plus and iPhone XR variants.