AppleInsider
Posted: July 4, 2019 6:10PM
in General Discussion edited June 2020
An unknown problem is causing difficulties with very many of Apple's iCloud services and is also affecting retail stores which are reportedly unable to complete sales. Update: Apple has now restored many of the 21 services. 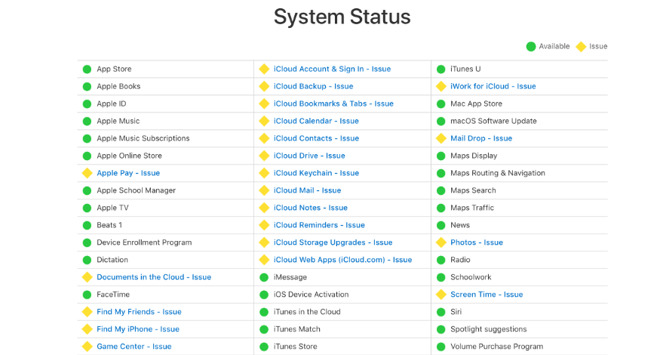 Following intermittent email problems earlier today, very many of Apple's iCloud services are officially listed as being down or "experiencing a problem," according to Apple's system status pages

The problem appeared to be quickly worsening, too, as more services were being affected. That appears to have stemmed and Apple has been reporting mostly steadily improved services all round. After approximately 90 minutes, an Apple Pay issue regarding the ability to use or suspend cards was the first to be fixed.

Game Center and iCloud Mail problems were next to be fixed. Apple's automated system status has been reporting fluctuating numbers of resolved issues, but currently it claims 18 out of the 21 issues had been fixed.

The remaining services still having difficulties include iCloud Reminders and iCloud Calendar.

Apple has yet to comment but customers on Twitter were reporting similar failures in Apple Stores. Reportedly some number of transactions are failing to complete, presumably because of the same issue.

This incident appears to have been more widespread than previous iCloud problems, but the service has been affected before, as recently as June where two separate incidents cause issues with the iTunes Store and basic iCloud functions.