AppleInsider
Posted: July 29, 2019 7:56PM
in General Discussion edited October 2020
If your Mac won't let you update one of Apple's apps until you click on 'Accept,' here's what to do when there is no such button. 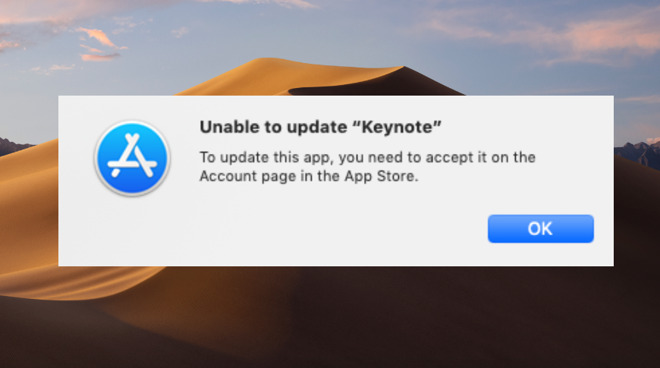 This example is of Keynote, but you can get it with Pages, Numbers, or even Safari

It's only when downloading apps goes wrong that we really appreciate how amazing it is that we can ever do it. Even if you can remember the days when software came in boxes that you bought from shops, you can't actually remember them because they seem so long ago and just so very wrong.

Apple changed the world in this way, Apple made it obvious that you should download software -- but just occasionally, it's Apple who makes it stop working.

Right now, if you have certain Apple apps installed on your Mac and a new version comes out, your Mac may block you from downloading them. It's the Apple app, such as Pages or Numbers, that will tell you there's an update, and it's Apple's macOS that will take you to Apple's Mac App Store, but that smooth, unbroken path through the Apple ecosystem sometimes comes to an abrupt halt.

"To update this app," says the App Store dialog box, "you need to accept it on the Account page in the App Store."

We'd rather not say what something presumably means, we'd rather take the time to find out where the Accept button is, but that's the problem.

While Apple's own support documentation specifically says that you should press an Accept button that is listed next to an app's name, good luck finding it.

Apparently some people do get this Accept button and they can therefore click on it with gusto, but for others, including AppleInsider there just isn't one. Seriously. No button.

We couldn't take a screenshot to show you where the button is supposed to be, because we can't get the App Store to show it to us.

There you go, that's it, just delete Numbers or whatever the app causing this problem is, and then go re-install it from the App Store.

When that's done, you'll have the latest version of the app installed on your Mac just as you would expect. This problem is too recent for us to know whether that will stay fixed for the next time there's an update, though.

Maybe the missing Accept button is tied to the seemingly still not resolved bug that sees the App Store pretend you have few or no previous purchases.

We'd rather Apple fixed that one completely, and in comparison the acceptance one is only mildly inconvenient.

Yet it's also downright peculiar. It's hard to see how it can be a technical issue, a legal one or a security procedure.

It's especially hard to see it as a security measure for two reasons. The first is that every step of this is controlled entirely by Apple, from your app telling you there's an update to the Mac App Store refusing to give it to you. There's no question of authentication or of someone managing to get into your account to maliciously buy an app that you've already got.

And then if it were some security issue, look at what happens when you fix it.

When you actually had the app installed, the Store made this big deal about how you had to confirm that you accepted it. Now you don't have it, the Store will let you download the latest version without blinking.

There's got to be a reason, but it doesn't look like it can be a good one. Not when Apple's support documentation promises you that there's an Accept button you need to press, but then it spends exactly as long again telling you what to do if this doesn't work.