AppleInsider
Posted: July 30, 2019 1:57PM
in iPhone edited July 2019
Apple has released three new videos in its 'Shot on iPhone' series, this time demonstrating how the iPhone XS' cameras could be used to capture the action at concerts and other performances, both on the stage and behind the scenes. 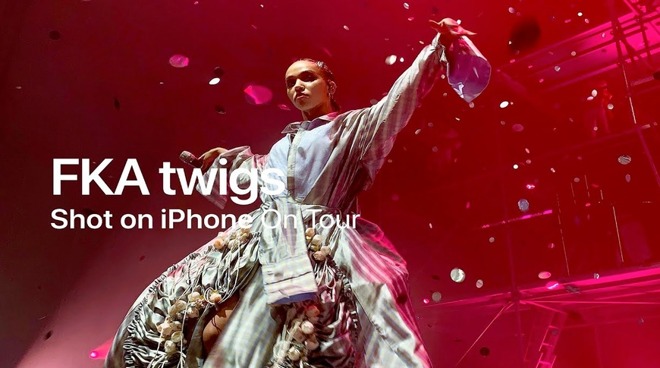 The trio of videos, published to the official Apple YouTube account, all show the on-stage activities of three musical acts in front of an audience, as well as some backstage and rehearsal moments before the performance itself. Three different artists and performances are featured in the collection.

All three clips move between the different periods of time, mixing color video with black and white imagery, to a backing track of the featured performance. Two of videos are identified as filmed by "Vincent H." with a third by "Josh G.," and are shot on the iPhone XS, but while there is an advisement of additional accessories and software being used, they are not listed by the iPhone maker.

The first, "On Tour with Florence + the Machine," shows the group performing the song "June" at the Red Rocks Amphitheater in Colorado.

Lastly, a performance at the Park Avenue Armory in New York, showing FKA twigs dancing to "Cellophane." FKA twigs previously worked with Apple on a short film for the HomePod directed by Spike Jonze.

The long-running 'Shot on iPhone' campaign is used to highlight Apple's iPhone cameras for both photography and video. As part of the campaign, Apple also hires videographers to produce short documentaries on a range of subjects, which are posted to the YouTube account.
Sign In or Register to comment.