AppleInsider
Posted: July 31, 2019 4:24PM
in General Discussion edited July 2019
Samsung has launched the Galaxy Tab S6, a new tablet with a 10.5-inch Super AMOLED display, a dual camera setup, an on-screen fingerprint scanner, and an upgraded S Pen stylus with new features as well as a rear groove for storage. 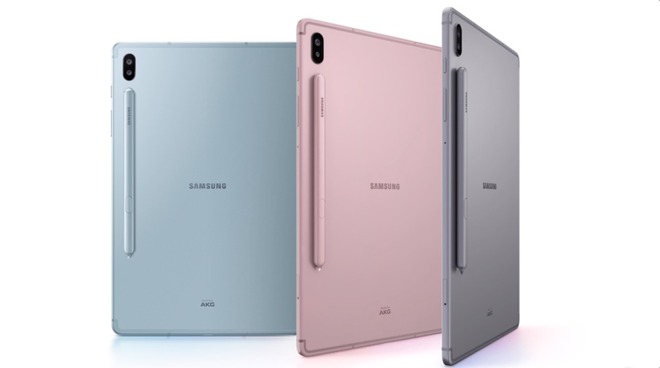 Revealed a week ahead of an expected launch of the Galaxy Note 10 phablet, the Galaxy Tab S6 is billed as a tablet for creative professionals. The initial launch of the device includes a video focusing on Coco Capitan, an artist collaborating with Hypebeast on projects using the tablet.

The new model features a large 10.5-inch WQXGA (2560x1600) display that is the same size as the one used in Apple's iPad Air, but offering a higher resolution. Weighing in at 420 grams (14.8 ounces) and measuring 5.7 millimeters thick, the tablet is powered by a 7-nanometer 64-bit octa-core processor, namely the Qualcomm Snapdragon 855, using 2.8GHz, 2.4Ghz, and 1.7GHz cores depending on workload and power requirements.

Two capacities are offered, with a 128-gigabyte model having 6 gigabytes of memory while the 256-gigabyte capacity model is equipped with 8 gigabytes of RAM, though both offer up to 1 terabyte of expandable capacity via microSD. Connectivity options include dual-band i-Fi with MIMO, Wi-Fi Direct, and Bluetooth 5.0 support, while the battery is a 7.040mAh unit.

While the front has a conventional 8-megapixel camera, the back sports two sensors, consisting of a 13-megapixel shooter alongside a 5-megapixel Ultra Wide camera with a 123-degree field of view. The onboard Neural Processing Unit is said to be useful for adding effects to images, with the tablet also capable of recording 4K video at 30fps and playing back 8K video, again at 30fps.

A key change for this version is an enhanced S Pen, which includes Bluetooth LE remote control features including S Pen Air actions, a system of gestures that can be made with the S Pen that commands the tablet without being in contact with it. The S Pen also boasts a ten-hour battery life after being charged for just ten minutes, and is magnetically stored in a small groove on the back of the device.

Shipping in Mountain Gray, Cloud Blue, and Rose Blush colors, the Galaxy Tab S6 will be available in "select markets" from late August. Pricing starts from $649 for the 128GB configuration, rising to $729 for the 256GB version.