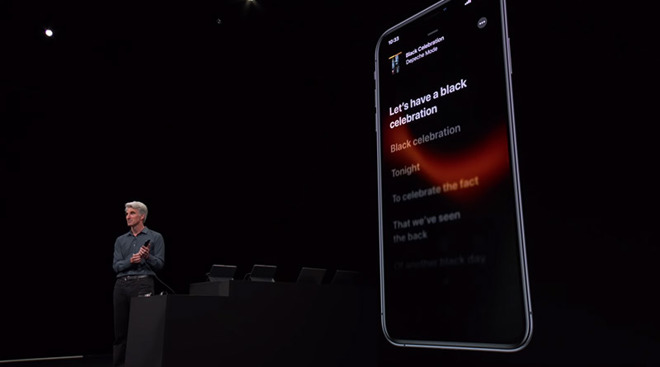 Anticipated for some time, Dark Mode on iOS inverts onscreen colors for use in low-light environments. Unlike a universal "inverse mode," Apple's option intelligently differentiates images and graphics from text, making for a more natural user experience. Apple introduced Dark Mode on Mac with macOS Mojave in 2018.

Demonstrated onstage by SVP of Software Engineering Craig Federighi, time-synced lyrics scroll on screen in large San Francisco type as a song plays, in time with the music. Users are able to navigate to specific phrases and verses in a song by tapping on the lyrics interface.

The feature is an improvement on static lyrics services provided by competing streaming platforms.

While Apple does not mention a wide release date for the features included in the Apple Music for Android beta, designated as version 3.0, the update will likely launch alongside its iOS 13 counterpart this fall. Apple's next-generation operating system is expected to roll out in September.

The Apple Music for Android beta program appears to be full, but users can download the app in its current iteration through the Google Play Store.
Sign In or Register to comment.