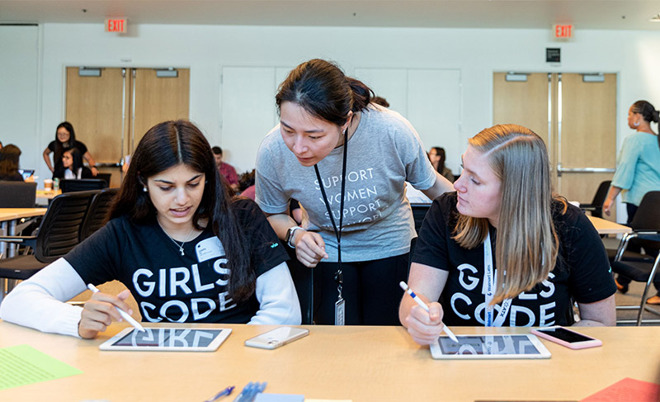 Initially revealed by Girls Who Code in a tweet, the partnership was also touted by Apple CEO Tim Cook.

"A more diverse future begins with opportunities for everyone. We're excited to work with @GirlsWhoCode, empowering girls across the US to be the tech leaders of tomorrow. #EveryoneCanCode," Cook said in a tweet.

An extension of Apple's Everyone Can Code initiative, the Girls Who Code curriculum will focus on the Swift coding language used to create apps for iOS, macOS, tvOS, watchOS and more. Example projects and lesson plans were not detailed, though it can be assumed Apple is preparing a broad range of materials for the organization.

Girls Who Code are free after-school programs offered to third through fifth, and sixth through 12th grade girls, according to its website. Clubs around the country teach three core values -- sisterhood, code and impact -- to prepare young women for work in the computing industry.

Apple's new Swift curriculum will be integrated into the Girls Who Code program this fall.

Apple has quickly grown the reach of Everyone Can Code since its debut in 2016, presenting coding lessons to a wide spectrum of learners around the world. In remarks during a meeting of President Trump's American Workforce Policy Advisory Board in March, Cook said Everyone Can Code was supported at 4,000 schools and 80 community colleges in the U.S.