AppleInsider
Posted: August 25, 2019 7:50PM
in iOS edited January 2021
The Lifx Beam is a modular smart light system that integrates with Apple's HomeKit to create stunning colors and impressive effects throughout the home. 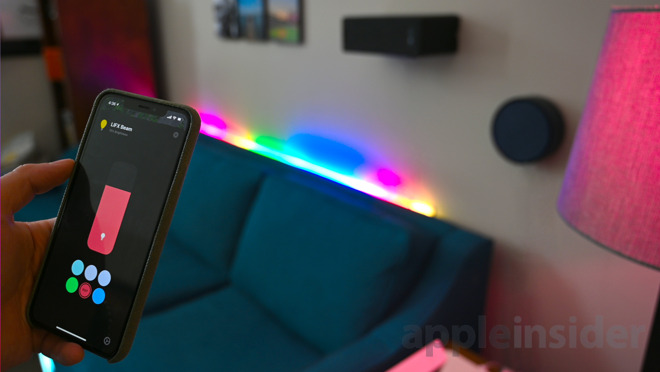 The substantial bulk of HomeKit lights on the market are various bulbs that get housed in standard fixtures. That makes something like the Lifx Beam more exciting -- because there is nothing really like it.

Lifx Beam is a set of 12-inch rectangles that house a series of LEDs. They connect to one another in a straight line or at a right angle. Then, using your phone or virtual assistant of choice, you can control the colorful diffused light. 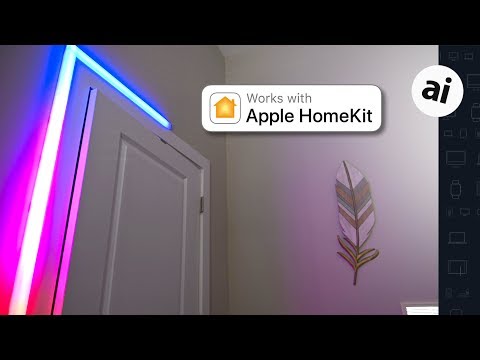 The light supports HomeKit, but Lifx has a powerful accompanying app that allows even further control outside Apple's smart home ecosystem. 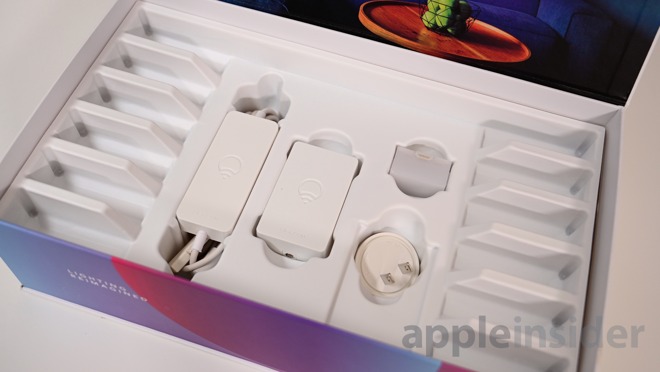 The components included with the Beam smart light

Inside the starter kit box are six 12-inch light pieces, as well as the necessary power adapter and cord. 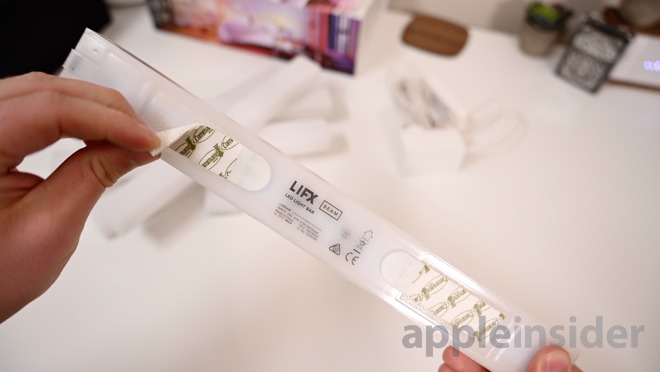 Command strips are used to adhere the lights to the wall

Each of the beams has two Command hook and loop wall adhesives on the rear side, used to affix to whatever mountable surface.

On each end of the tubes are a series of pinholes that are used to connect each piece together in whichever design you choose to create. Lifx includes one corner piece in the box though additional "beams" are available to extend this further. 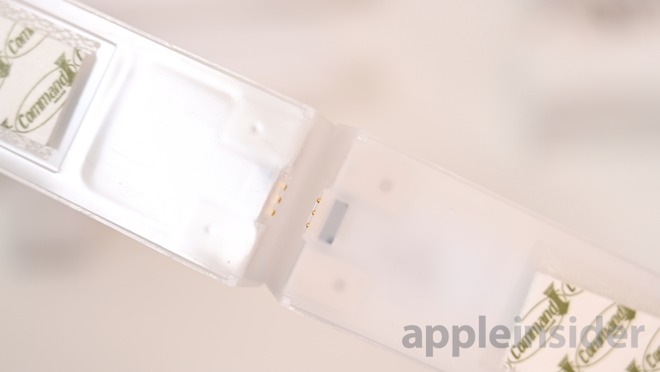 Pin connectors on the end of each Beam

Unlike models from Nanoleaf, Lifx uses pogo pins to connect each piece rather than physical connectors. Each Beam magnetically connects to each other as well, further strengthening the connection when on the wall.

Compared to flexible light strips, the Beam looks better out in the open. The light bars are designed to be in plain sight and not hidden under counters or behind desks.

We tried a few different places in our home including atop the back of our dresser, behind the living room couch, and mirroring the door frame. 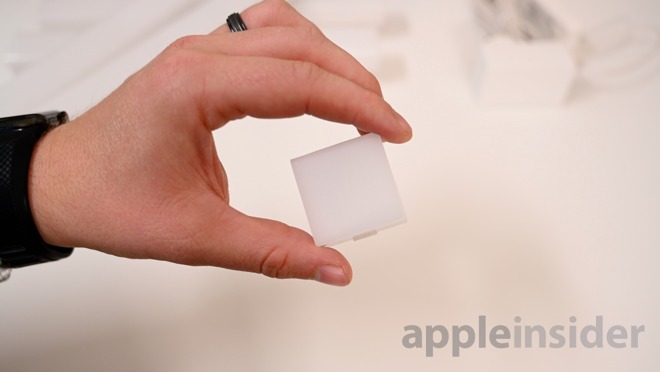 The corner piece of the Beam also lights up

Something small that we particularly liked was that the corner piece isn't just a connector, it has LEDs inside that respond just like the rest of the Beam. Lifx could have used a non-illuminated connector to cut costs, but they chose to commit to the design and quality of the product.

This creates a more seamless lighting effect overall with no dead spots.

Beam works with Amazon Alexa, Google Assistant, Microsoft Cortana, and -- of course -- Apple's HomeKit. It is the latter that we will predominantly focus on.

With HomeKit, the light can be controlled, automated, and scheduled via the Home app -- like any other HomeKit light. This includes your voice via Siri.

It can be included in scenes with other HomeKit accessories, triggered via switches, or automated by motion. 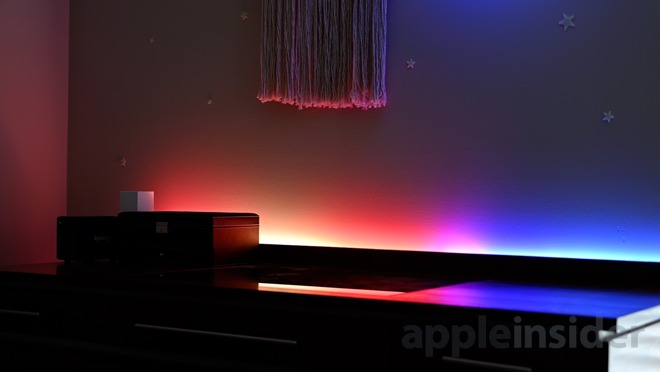 One limitation to HomeKit is that the entire Beam can only be one color. if you use the Home app to change the color to blue, the whole light will be blue. If you use the Lifx app, however, each part of the Beam can be a different color.

Another issue we ran into with the Home app is that when we say try to use the white temperature wheel. The daytime white is far too blue and the evening warm white is far to orange/red.

There are two ways around this. First, set the color you prefer as part of a scene, then invoke that scene. Alternatively, the white temperature wheel in the Lifx app that is far more powerful and even gives the actual Kelvin value. 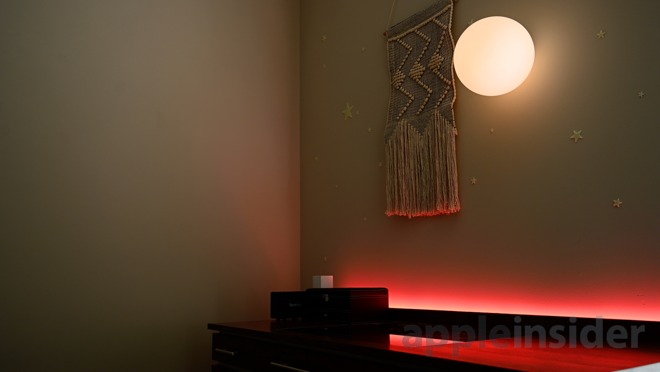 As a general rule, the Lifx app is far better for controlling the Beam and any other Lifx smart light. In the case of the Beam, each different section of the Beam can be set to a different color. You can create your own colorscapes or you can choose from any of the pre-designed themes that Lifx has created.

To use these with Siri or the Home app, they must be created into HomeKit scenes, then they can be controlled outside the Lifx app. 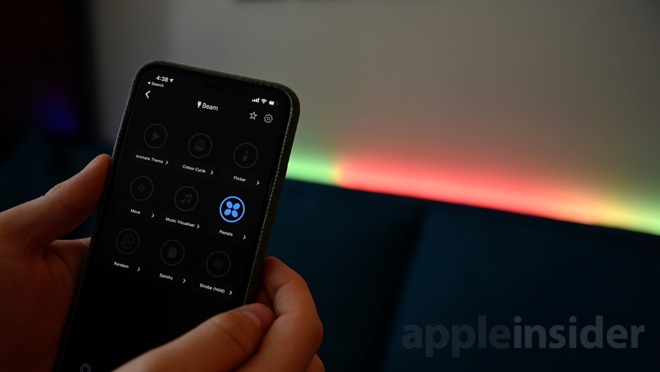 A number of effects are also included within the Lifx app. For example, set the Beam to a variety of reds, yellows. and oranges and use the flicker effect to mimic a flame. Or synchronize the Beam to music. 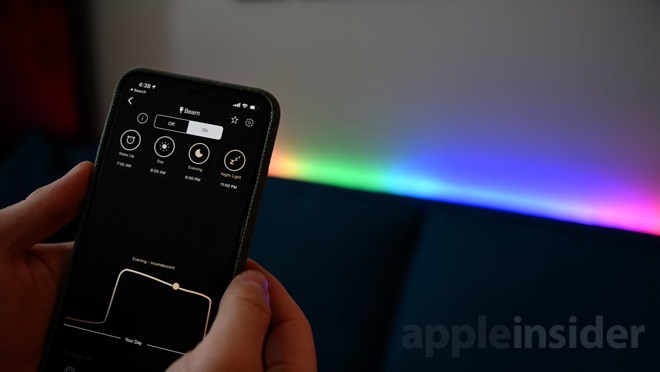 Our favorite tool of the Lifx app though is the ability to schedule it to light throughout the day. This can be done in HomeKit natively, but it is much easier through the Lifx app. In our case, Monday through Friday the light will slowly turn on at 7AM, gradually increasing brightness. Then throughout the day the light will turn warmer and warmer before dimming into the evening. Each of the times, colors, and brightnesses can be adjusted to preference. 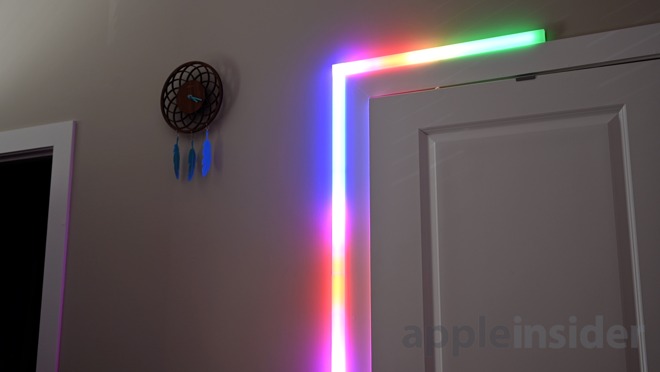 The Beam can be mounted out in the open

The Lifx Beam is less obtrusive than other tile-based smart lights and can more easily fit into home's intereiors.

It can not only be out in the open on its own, but it can be tucked away to accent furniture or structures in the house.

HomeKit brings it into Apple's smart home ecosystem, even if the impleentation regarding the color temperature or multiple colors is finicky. To round it out, the Lifx app adds more funcitonality than almost any other smart home light, and it does it in an easy-to-use fashion. 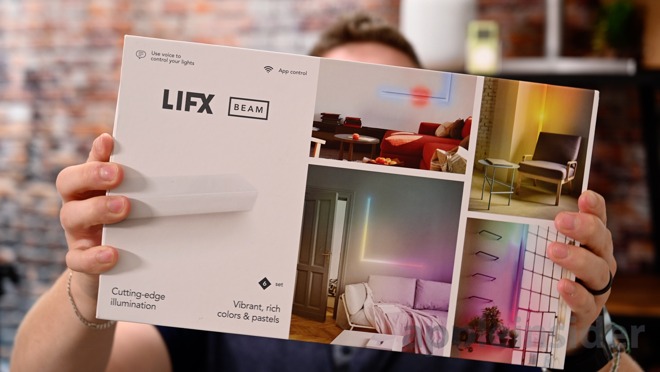 If you have an existing smart home -- or are just looking to get started -- the Lifx Beam is a colorful, full-featured smart light that will easily make your place look great.

Grab the Lifx Beam from Amazon for $109.