Review: GoCube is a fast & fun way to learn to solve the Rubik's Cube

AppleInsider
Posted: August 26, 2019 4:07PM
in General Discussion edited January 2021
Looking to learn how to solve a Rubik's cube? Check out the GoCube, a Bluetooth enabled cube that allows you to learn alongside an app. 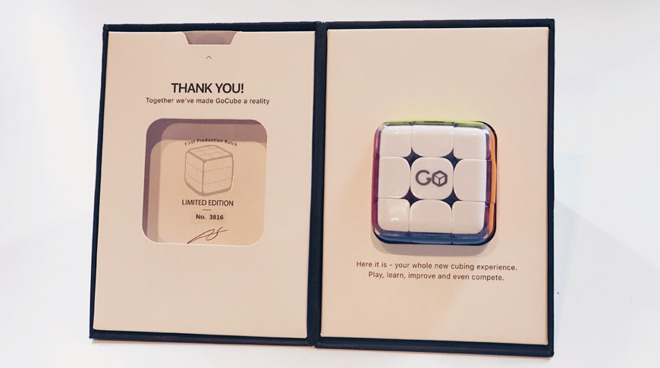 The Rubik's cube was invented in 1974 in Hungary, was commercially available in 1977, and has since rocketed to the top of the top-selling puzzle game list. Cubing -- or the act of solving a puzzle cube -- is a hobby that just about anyone can pick up, though learning it does take a bit of time.

If you've ever been interested in learning to solve a Rubik's cube, there's plenty of ways to do so. The internet has a plethora of resources, but they can be tricky to follow along with. That's where GoCube comes in. They've designed a Bluetooth puzzle cube with a companion app that employs a more one-on-one, customized approach.

The GoCube is an absolute joy to hold and play with, with an extremely fluid movement and near-silent operation. It's definitely smooth enough to be considered a speed cube, which I found helpful while learning. I have another standard cube that I adore, but occasionally it seems to "stick" and begin turning multiple layers at once, which can make for slower solving and more mistakes. I didn't experience any of that unfortunate sticking with the GoCube. 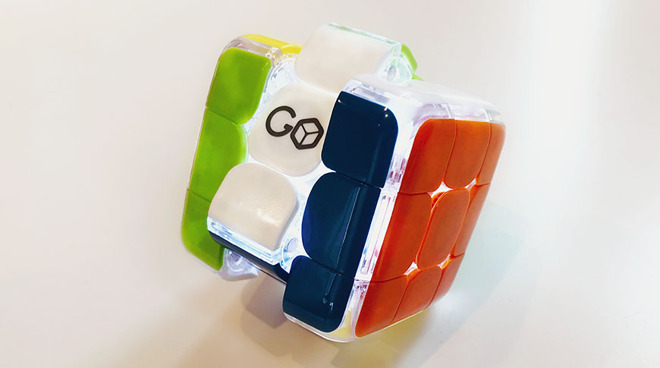 Yes, it also lights up.

The overall aesthetics of the cube are nice as well. The corners are slightly rounded, the squares themselves are solid-colored plastic, and the size is a bit smaller than other cubes I've used in the past. The only complaint I have is that because the cube is so slick and devoid of any texture, it can be a little slippery to hold. If you're prone to dropping things, you may want to solve this cube on carpeted surfaces.

Charging the GoCube is easy, too. Simply place it onto the charging stand, and align the center yellow piece with the prongs on the USB charging cable. The GoCube doesn't take very long to charge, about an hour and a half if it's drained completely flat. 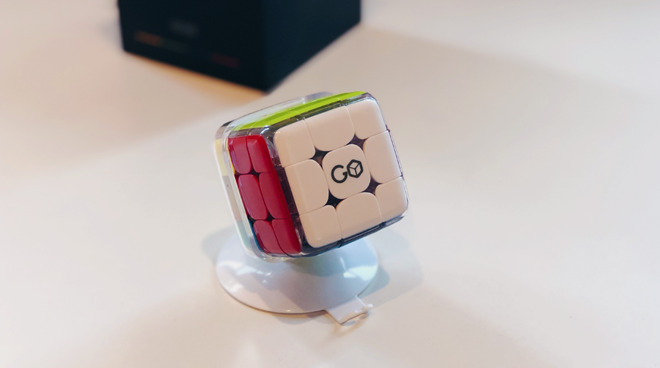 Utilizing Bluetooth 5, the GoCube is able to sense its orientation, and communicate it back to the GoCube app. The app shows a 3D image of your GoCube that moves in real time alongside the physical cube. This means that if you turn the left face of your GoCube counter-clockwise, it will be reflected by the 3D cube in the app. 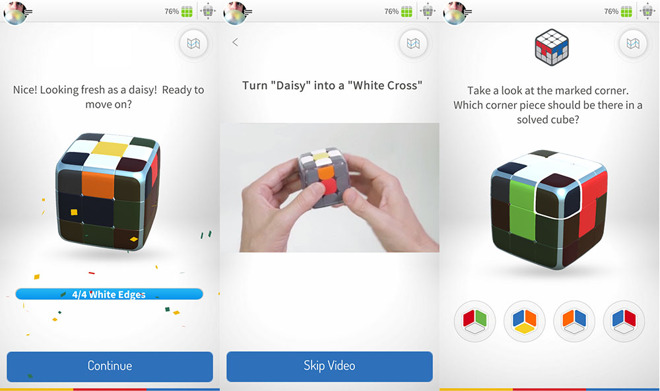 When I started using the GoCube, I was able to fully solve the first layer -- typically what Cubers refer to as "the white face" -- without any help. This was as far as I had gotten in my journey, which admittedly only started a few months ago.

The GoCube app has a feature called "The Academy," in which the app guides you through the process of solving a cube from start to finish. Not only does it show you how to solve a cube, it teaches you about the cube itself, as well as how to read algorithms, which are extremely important for solving a cube.

Before using the GoCube academy app, I had a vague understanding of algorithms and could more-or-less process them. Still, I had an exceptionally tough time committing them to memory. The motions seemed foreign and I often got confused halfway through solving something, which would inevitably cause me to undo any progress that I'd made.

One sleepy Sunday morning, I decided to sit down and learn how to solve the second layer. I had never really gotten the hang of solving the second layer and often wound up with backwards-facing edge pieces. 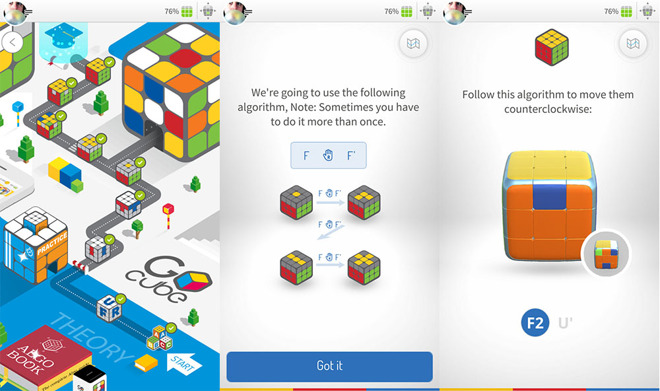 Within just a couple hours, the GoCube app taught me how to solve the second layer. Not only could I solve it, but my overall solve-time for the first two layers ended up being less than four minutes.

While I still can't solve the third layer completely on my own, I am now capable of reading the algorithms and patterns required to solve it with no trouble with the hep of the GoCube. I anticipate that, given another day where I could sit down and follow along with the app without getting buffeted by the Apple news flow, I would be able to solve the cube consistently on my own. 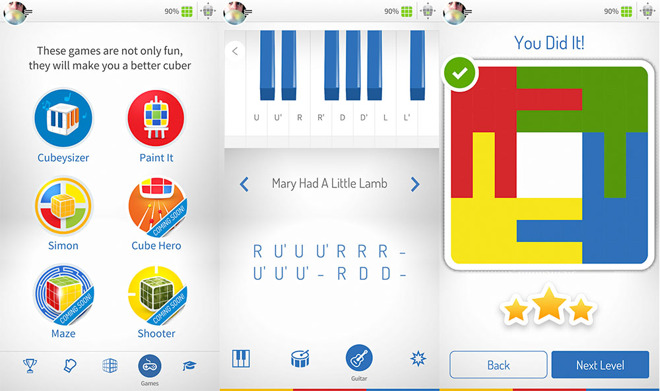 The Academy is not the only feature of the GoCube app by any means. There are a couple games and toys you can play with that require you to use your cube as a controller.

Perhaps the most amusing is the ability to play a song by twisting the different layers of the cube in different directions. Not only is this just a fun way to mess around with the cube, it's also a surprisingly efficient way to commit specific actions to memory when first learning how to read an algorithm.

These features are somewhat sparse right now, though GoCube plans on releasing more in future updates, including an arcade-style shooter.

For the practiced solver 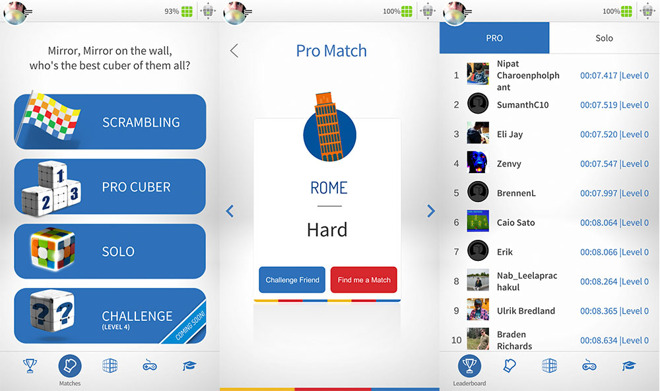 So far, I've probably painted the GoCube as a tool for beginners, but that's not the only crowd it should appeal to. The GoCube app has some features for those who are practiced solvers as well.

If you're looking to get an idea of your average solve time or trying to top a personal best, the GoCube has a built in "from-start-to-solve" timer, a personal scoreboard, global leaderboards, and even the ability to go head-to-head with other GoCube owners.

Something to be aware of

Occasionally, your cube will fall out of sync with the app and might not display the exact current orientation on screen. I wouldn't call this a specific failure of the GoCube itself, as we've all dealt with iffy Bluetooth connections before.

The GoCube creators realized that this would be an issue, and have included a one-tap calibration mode that is accessible within any screen that currently displays your cube's orientation. Just hold the cube with the green side to the front and the white side at the top, hit the button, and continue along your merry way.

Where improvements could be made

While I think it'd be hard to improve on the Cube itself, I do have a minor complaint in regards to the app. I'd personally hope to see the creators give users a chance to access an algorithm section that walks them through the exact way to hold and move the cube without needing to go through the academy again. Currently, the only option to see an algorithm outside of the academy is to watch a video, which for those who are just learning may not be enough.

Solving the final layer of the Rubik's cube can often be a little fiddly. Having a chance to quickly view an algorithm would definitely help those times when you're not quite sure if you need to rotate a face clockwise or counter-clockwise.

The GoCube is a solidly built cube in its own right, but the GoCube App is really where the product shines. If you're interested in learning to solve Rubik's style puzzle cubes, this is definitely a fast and fun way to do it. You can snag the GoCube from Amazon for $99.95.