AppleInsider
Posted: September 17, 2019 1:07PM
in General Discussion edited November 2019
Apple's future car from 'Project Titan' could be accompanied by an accessory for the home to help recharge the electric vehicle, consisting of a small robot capable of hooking the car up to an electrical point below the vehicle to acquire more power. 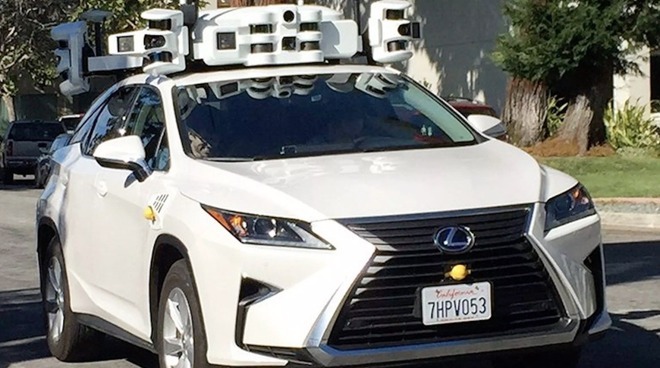 A Lexus fitted with an early Apple self-driving testbed

The long-in-development "Project Titan," the name used to cover all of the company's Apple Car efforts, is believed in part to consist of a vehicle design, one that is powered by electricity. While there has been plenty of discussion about Apple's car design ideas, the iPhone maker has also turned its attention to other related areas, namely solving the problem of recharging the vehicle.

To obtain more energy while parked at home, an electric car could be plugged in to the local power supply overnight, making it ready to go the following morning after a few hours drawing current. While practical, the process does rely on the driver or another member of the household to remember to plug the supply cord into the car at night.

Even worse, drivers have to remember to unplug the cord in the morning, or face the prospect of pulling apart the cord or ripping the recharging device off the wall as it follows the vehicle out of the garage.

In a patent granted to Apple by the US Patent and Trademark Office on Tuesday titled "Charging system," it seems one answer to the problem is to take it out of the hands of drivers entirely, via automation.

In short, Apple's answer is to create a device that rests on the floor that can move around once triggered. After moving into position, the device then applies power to the vehicle by a base-mounted receiver. Another trigger could be used to disconnect the unit and to retract it out of the way. 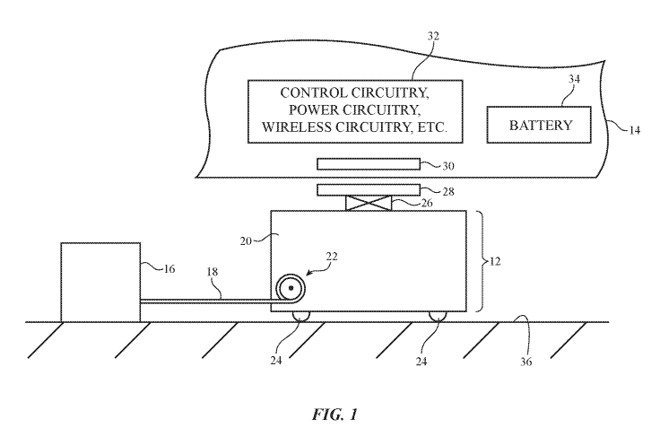 In Apple's proposal, the unit could carry a power cord for a physical connection for transfers, or could use a coil-based wireless charging system. The unit is also able to move on its own, possibly by using motors and wheels, with detection systems allowing it to avoid any obstacles on the floor as it shifts into position.

Since it is likely to have a trailing cable, the system would also have to use the obstacle detection system to calculate the optimal route to its destination. Not only would this be due to a limited amount of cable, but also to prevent the cable from becoming an obstacle in its own right, such as by being driven over by the car as it departs.

To aid the device in getting to where it needs to be, the car can have an alignment structure to guide the charging cord connector into the right place in the vehicle. Apple also proposes the use of light detectors and emitters, cameras, magnetic sensors, and radios to help the unit determine its location relative to the base of the vehicle.

Examples of a contact-based charging and cord deposition system

Apple files numerous patents and applications on a weekly basis, and while the documents do serve as a guide to where Apple's research and development efforts go, the existence of a filing is not a guarantee it will make an appearance in a future product or service.

It is firmly believed the "Charging system" patent is for an Apple-designed car due to the 26 references to the word "vehicle" and derivatives throughout the document. The nature of the device also has applications elsewhere, such as for enterprise or industrial recharging of moving machinery, reducing the work of employees.

"Project Titan" has been rumored to be some form of electric vehicle, and at one point even an electric-powered van. There has even been the hiring of Tesla's engineering VP in charge of powertrains in March, further indicating an electric vehicle was in development.

Patents and applications have also hinted at such a vehicle's development. For example, one from June proposed ways to fill the floor of a car with batteries, while a 2018 filing revealed the development of high-voltage power converters intended for sports cars.

In May, it was reported Apple was building large drive rooms in California, for the development and testing of advanced battery technology that could one day be used in a car.
«12»