AppleInsider
Posted: September 17, 2019 3:04PM
in General Discussion
Amazon has introduced a new lossless audio streaming service titled "Amazon Music Unlimited HD" for those who want to experience their music at a higher quality. 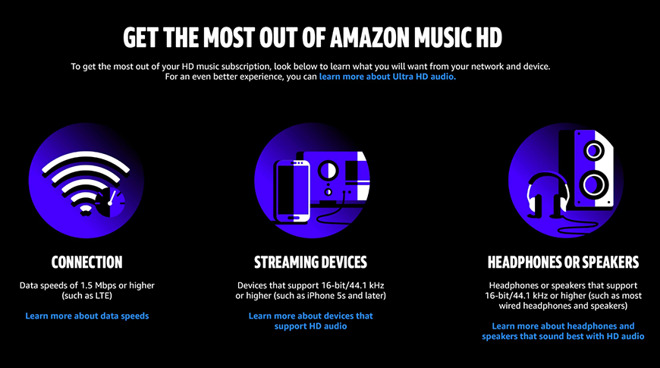 Amazon's Music Unlimited HD gives Amazon customers the chance to stream their favorite songs in higher definition than they would be able to on other services. Currently, Amazon Music HD offers lossless audio on two quality ranges, HD and Ultra HD.

This also means that streaming HD and Ultra HD songs will use up more of your data plan, so it's advised that people with lower data caps listen to music via Wi-Fi or download the music for offline listening later.

Most iPhones and iPads released since 2014 support HD/Ultra HD playback. Apple AirPlay also supports HD quality playback. Any Mac from 2013 or later can support HD and Ultra HD, as well.

The service $5-$7 more expensive than the standard Amazon Music Unlimited, which costs $7.99, depending whether or not a customer also has Amazon Prime.

You can get a three month free trial when you sign up, and costs $12.99 a month for Amazon Prime members, and $14.99 for everyone else. Amazon Music Unlimited family plan subscribers can upgrade to Amazon Music HD for an additional $5/month.