AppleInsider
Posted: October 15, 2019 8:50PM
in General Discussion edited March 2020
NBCUniversal plans to build on an exclusive ad sales partnership with Apple after seeing substantial growth from Apple News, with the company set to extend the business into Apple's Stocks app upon contract renewal. 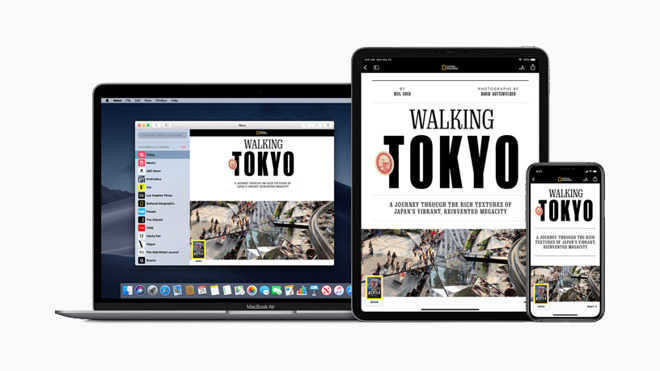 The company's executive vice president of business operations and strategy, Krishan Bhatia, said Apple News represents "a very meaningfully-sized business compared to what we do on Youtube, Twitter or Snapchat."

When Apple abandoned its in-house iAd business in 2016, NBCU took over ad sales for Apple News under an exclusive contract that allowed the firm to sell content against articles appearing on the platform's main feed. That contract is being renewed for an unspecified number of years, according to the report.

In addition to Apple News, the contract extension will enable NBCU to sell and serve ads within Apple Stocks, though it is unclear how the advertisements will be integrated into the financial app. Currently, alongside the main feed ads from NBCU, publishers on Apple News can sell and display ads in their respective articles.

Over the past two years, NBCU's Apple News business has experienced consistent growth, with the number of advertisers seeking ad space doubling from more than 100 to "multiple hundreds," Bhatia said. Thanks in part to Apple's focus on services, and a new Apple News app, NBCU's own content has generated more than 42 million hours of engagement since January 2018, the report said.

"It's a highly-scaled audience with high engagement in a premium content environment," Bhatia said. "The average user spends over an hour per month on it."

Axios fails to mention financials, but previous reports claimed Apple's agreement with NBCU affords the ad seller a 30% cut of incoming revenue, with the remaining 70% going to content providers. Publishers that sell their own ads, which appear in articles but not on the main feed, are allowed to keep all revenue under Apple News terms.

Echoing previous reports, Axios notes NBCU's partnership with Apple News is not emblematic of the fortunes of other publishers. Smaller outfits often complain of low advertising revenues despite the massive reach that Apple News affords.