AppleInsider
Posted: November 5, 2019 1:34PM
in Future Apple Hardware
Apple's audio endeavors are not limited to the AirPods and AirPods Pro, with the iPhone maker looking into how it can improve the audio experience for over-ear headphones by dampening low frequencies, as well as headphones that could double as portable speakers. 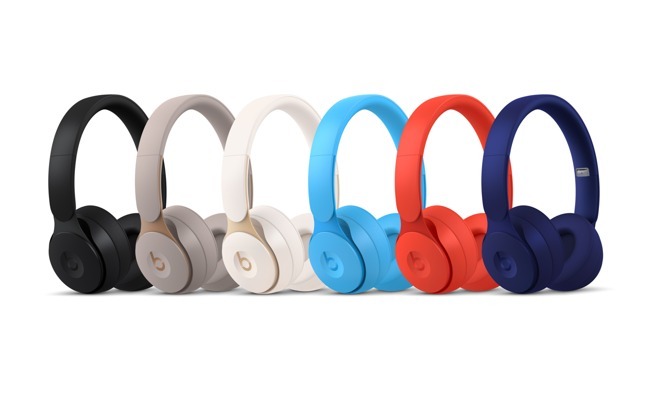 Apple is continuing to do exceptionally well with its AirPods lineup, and has developed it further with the recent launch of the AirPods Pro. Aside from a slight redesign, the AirPods Pro's main feature is the inclusion of Active Noise Cancellation, along with a Transparency mode that dampens some of the external noise and allow users to continue to hear the environment over their music or podcast.

The technologies created by Apple, which do filter through to the Beats brand of accessories over time, could pave the way for Apple's ANC technology to be included in the fashionable brand's headphones. At the same time, there is evidence Apple is looking beyond ANC into other features for headphone users, to further improve the audio experience.

The first of two related patents granted by the US Patent and Trademark Office titled "Headphones with tunable dampening features," Apple attempts to solve a problem with closed-back earcup designs that, while they provide good sound insulation from ambient noise, the design can develop unwanted resonances in the air trapped within each earcup.

Standing waves can accumulate in the earcups, which can degrade sound quality and reduce comfort, typically in the range of 7kHz to 9kHz range. Apple's patent aims to solve this by deadening these unwanted frequencies. 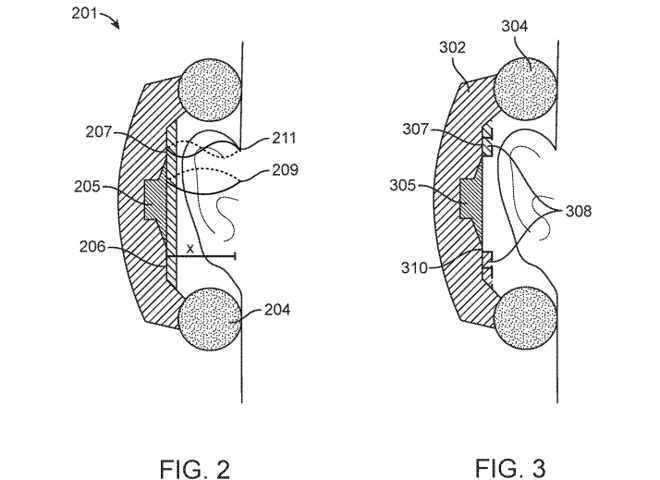 An illustration of a traditional earcup (left), and Apple's proposed dampened earcup (right)

For the concept, Apple proposes the use of acoustic dampeners surrounding the speaker in the earcup, with the dampeners configured to dampen standing wave resonances at multiple frequencies. The multiple dampener chambers are bound to the housing by a solid film layer.

Variations of the claim include the use of sidewalls to define the direction of waves within the chambers and near the film layer, the use of acoustic dampening materials, and even using multiple dampeners tuned to the same frequency. Pluralities of acoustic resonators and Helmholtz resonators are also tipped for use.

Mentions are made of treatments relating to the driver, including sound-absorbing materials placed onto the front surface of the driver housing plate, along with a cavity formed within the driving housing plate to house more dampening material.

A second patent, is for "Dual mode headphones and methods for constructing the same." In effect, what the patent proposes is convertible headphones that can be transformed into speakers, by moving the earcups into a different position.

By using sensors in the headphones to detect the orientation of each earcup, the headphones can switch between different circuit modes relating to each position. This means the headphones will work as headphones if the earcups are positioned normally, namely facing each other, or can be put into a speaker mode when tilted out externally.

In switching the mode, the speaker can change its audio properties to deploy sound in different ways. In the speaker configuration, it could use an amplifier as part of the circuit to create louder sounds, which can be turned off or bypassed when in headphone mode. 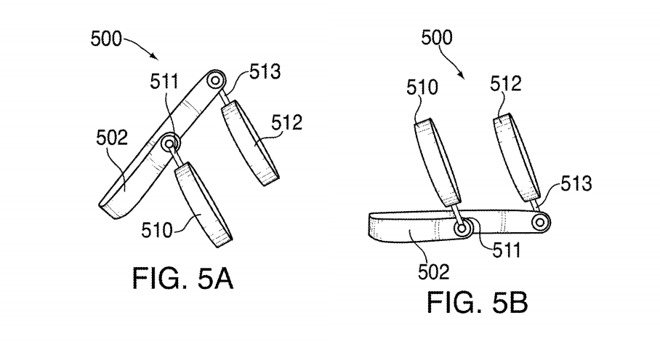 The position detection will also help prevent the speaker mode from being engaged if there is a chance the wearer is using the headphones near the ear. While it could detect the movement of an articulated component in the body for modes, others could be used to sense if a speaker is near a user's body and to prevent audio-related injury, with the list of sensors including photoresistive, capacitance, proximity, IR, ambient light, Hall Effect, resistive, and electrical signal sensors.

It is also reasoned sensors could be used to detect the distance between the user's ears and headphones, with the potential to disable speaker mode even if the user is not in contact with them.

The dual-mode patent is actually a continuation of one that was granted in February 2017, which explained the same concept. The latest version is a slight refinement on the earlier patent.

Apple files numerous patent applications on a weekly basis, but while the existence of a filing indicates areas of interest for the company's research and development efforts, there is no guarantee the concepts will be used in a future product or service.

For the first patent, it seems plausible Apple may use some of the ideas in its Beats lineup, at least in future designs. Offering improved sound quality is always beneficial to users, and can help enhance the premium nature of some of the brand's audio accessories.

The second patent has its benefits, in that it would mean users wouldn't need to acquire separate Bluetooth speakers, nor would they need to carry around headphones and speakers. However, considering the previous patent's appearance in 2017 and the lack of progress on that front in the time since, it seems unlikely such a product will be launching anytime soon.

Apple has been rumored to be working on its own branded headphones for some time, but aside from the AirPods line and the wired Earpods, it hasn't stepped that far into the audio field yet.

There have been other filings suggesting it is doing so, including one where Apple has come up with headphones that could detect which earcup is on which ear. In theory, this would allow the headphones to switch the audio feeds so the left channel always goes to the left ear, and the same for the right.