AppleInsider
Posted: November 5, 2019 4:30PM
in iPad
A future version of the iPhone or iPad could use a radical new design of case, one that includes an outer ring that not only protects the mobile device but also holds other components and can be used as a kickstand. 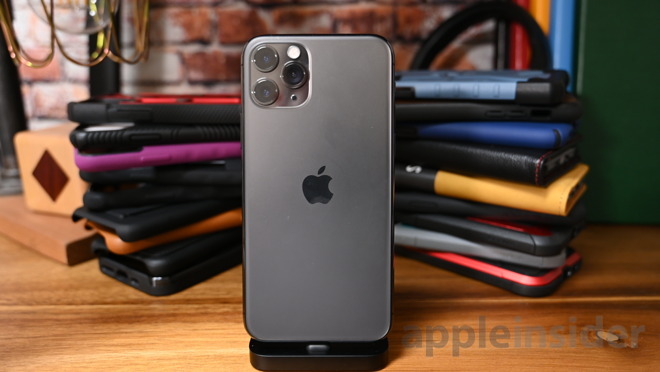 The introduction of the iPhone and iPad was shortly followed by the creation of an entirely new accessory industry, looking to sell covers and cases to protect precious smartphones and tablets. In some instances, the cases offer extra functionality, such as kickstands and wallets, while some like Apple's Smart Battery Case, provide an extra power source for the device to use, extending its battery life.

In a patent granted by the US Patent and Trademark Office on Tuesday titled "Peripheral housing for a computer device," Apple proposes a radical rethink of not only how cases are designed, but also how they come into contact with the devices they house.

In Apple's concept, the device consists of a main body, such as an iPad, that attaches to the case on one edge. The case itself consists of a large loop bumper that surrounds all edges of the main unit, but only attaches by that single edge.

The loop itself is hinged by the attachment to the device, which can allow the main unit to pivot forward and for the loop to move back, effectively turning into a kickstand or, if the hinge is designed to allow it, a handle. The loop can also be segmented, allowing for some elements to twist at the corners to create feet, making it stand up vertically without any tilt.

An example of the case loop's design, note the inclusion of dots for cameras in the loop's top and right edges

The connection also enables the loop to house other components, such as a battery, though it could feasibly include other types of hardware like a camera or other input elements.

The same core concept can also be employed for other purposes, including designs that still retain a back cover element. In one proposal, the large flat area of the cover could house a keyboard, which when used with the main device when the case is hinged open, can turn it into a notebook reminiscent of existing keyboard covers.

While this idea could lend itself to a new type of cover, the ability to house the battery, or even camera components, within the bumper section means Apple could incorporate the bumper loop as part of the device's core design. This could result in an even thinner main unit, as the battery is shifted away from its current location in the iPad filling out the space behind the display.

An example of a hidden keyboard variant of the case

Apple files numerous patent applications on a weekly basis, but though the filings are not a guarantee Apple will release a product that uses the concepts described in the documents, it does show areas of interest for the company's research efforts.

At its core, the design would require a fundamental rethink of how Apple produces the iPhone or iPad to incorporate the hinged loop section, and it may be one that could be a turn off to some consumers used to the existing familiar appearance of Apple's tablet lineup.

Implementing the concept would also make life tougher for accessory producers, as they would have to somehow make a new style of cover that can take into account the hinge and loop elements, which in turn makes it harder to add more functionality.

Apple has explored the idea of hiding components within cases and other seemingly inessential elements before, primarily for the Apple Watch. A series of patent filings have suggested the inclusion of batteries, indicators, and cameras for the Apple Watch band, along with creating backplates for the back of the Apple Watch to enhance its capabilities while making the device slightly thicker.