AppleInsider
Posted: November 6, 2019 2:00PM
in General Discussion edited November 2019
Apple has updated its official privacy site with explanatory overviews of hot-button topics such as being tracked by your phone, and having messages intercepted. Plus it's added four white papers with technical details of its privacy elements. 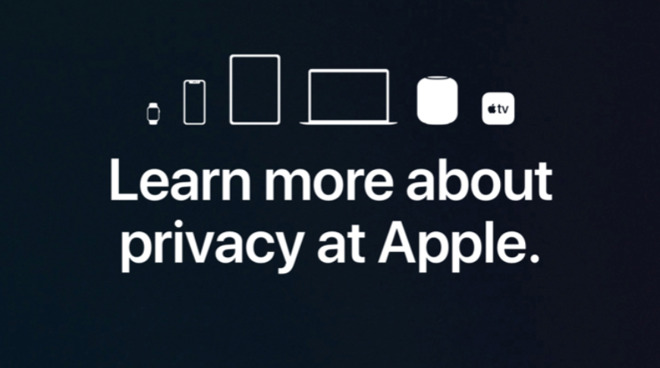 The page, simply titled Privacy, has existed for some time and contained much of the same information, most notably including instructions for how users can request a copy of all the data Apple stores about them. The new redesign, however, first breaks the topics down into simpler, clearer descriptions.

It seems intended to give concerned, if inexperienced, users a fast way to grasp the issues -- and to see Apple as being different to all its competitors.

The papers total over 40 pages of information about Apple policies and specifics of how the company uses which technologies in what circumstances or with which devices.

By themselves, these papers and the revised primer are a clear, comprehensive guide to issues that are increasingly concerning everyone. However, they're also only the latest round in Apple's ambition to increase awareness both of privacy and of its role in protecting us.

It's an ambition that has most recently seen Tim Cook become increasingly politically vocal, but it started way back with Steve Jobs. 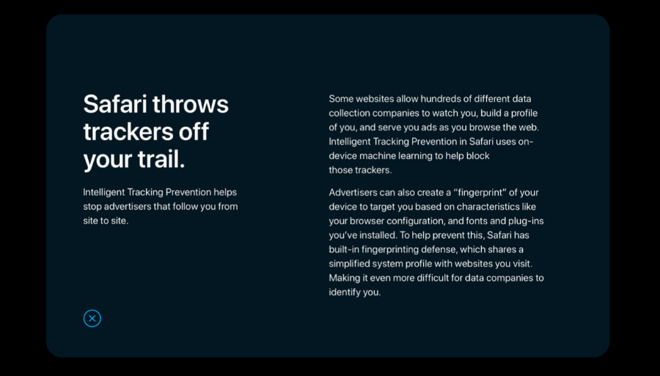 One of Apple's new primers on Privacy, as shown on its redesigned site.

Tim Cook repeatedly says that privacy is central to Apple, and often adds that the company considers privacy right from the very start of designing any product. You might think that's right or you might think it's hype, but Apple has definitely been talking up privacy for a long time.

It's unlikely that Steve Jobs and Steve Wozniak considered Cambridge Analytica type privacy back during the days of the Apple II. But Jobs definitely thought about it.

In 2010, he was interviewed at a Wall Street Journal in front of an audience that, as he and the presenters acknowledged, included Facebook founder Mark Zuckerberg.

"We've always had a very different view of privacy than some of our... colleagues," he said. "We take privacy extremely seriously. Privacy means people know what they're signing up for, in plain English and repeatedly."

"I believe people are smart and some people want to share more data than other people do," he continued. "Ask them. Ask them every time. Make them tell you to stop asking them if they get tired of your asking them. Let them know precisely what you're going to do with their data." 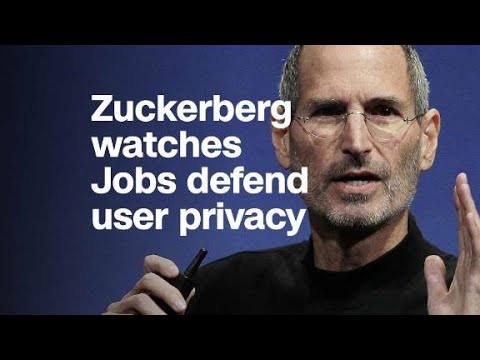 Even as Jobs effectively launched Apple's stance on privacy in that interview, the company was already seeing a commercial advantage to being rigidly protective of user data.

Around this same time, Jobs was visiting publishers in an attempt to get them to put their news sites on the iPad's special news section, and they were resisting. A part of that resistance, which would be repeated years later over Apple News+, was that Apple wanted to take a cut of revenue.

However, a greater part was that in that scenario, readers would be Apple customers -- and Apple would not release any user data without that user's explicit permission. Knowing your audience, and being able to market to them, is key, and while Apple was protecting us all from unwanted advertising, it was able to do as much marketing to us as it liked.

Nonetheless, Apple did keep adding features, especially to iOS, that were specifically to help us keep control over our own privacy choices. This only increased when Tim Cook permanently took over from Steve Jobs in 2011.

Some privacy moves that Cook introduced were inspired by the discovery in 2013 of an app named Path which had passed approvals and so was on the App Store, but was illicitly taking user data.

Under Cook, the Settings app in iOS 6 added a whole new Privacy section which gave the ability to toggle on or off permissions for apps to use certain data. Then iOS 7 added the activation lock, which meant you needed the original Apple ID and password of a device, even if you've completely erased it.

As well as helping make your data on the device secure, because no one could get around the activation lock, police also later said that the feature had led to a significant drop in iPhone thefts.

It was now 2013, and Apple was not just adding features to its software, it was beginning to try raising awareness in general. Apple introduced an annual Transparency Report, which details what it has done about privacy in the year -- and precisely how many government requests for data it's received.

If you'd been paying attention to security, and most people were not, then Apple would've been looking pretty good at this point.

Until it was revealed that the NSA was using iPhone spyware and suddenly Apple's claims of independence and privacy were being doubted.

Tim Cook denied being complicit with the NSA and issued a statement:

Apple has never worked with the NSA to create a backdoor in any of our products, including iPhone. Additionally, we have been unaware of this alleged NSA program targeting our products. We care deeply about our customers' privacy and security. Our team is continuously working to make our products even more secure, and we make it easy for customers to keep their software up to date with the latest advancements. Whenever we hear about attempts to undermine Apple's industry-leading security, we thoroughly investigate and take appropriate steps to protect our customers. We will continue to use our resources to stay ahead of malicious hackers and defend our customers from security attacks, regardless of who's behind them.

There was still the issue of how the NSA could get by Apple's security, but then the very next year it briefly appeared as if just about anyone could. In what became known as Celebgate, the personal and intimate photos of 200 celebrities were seemingly taken as hackers got into iCloud.

They didn't. It was done by phishing, these celebrities were each conned into handing over enough information for their iCloud accounts to be opened.

Try telling that to a public and, especially, a press just relishing a story with Apple, Hollywood celebrities, and intimate photos. Tim Cook certainly tried. 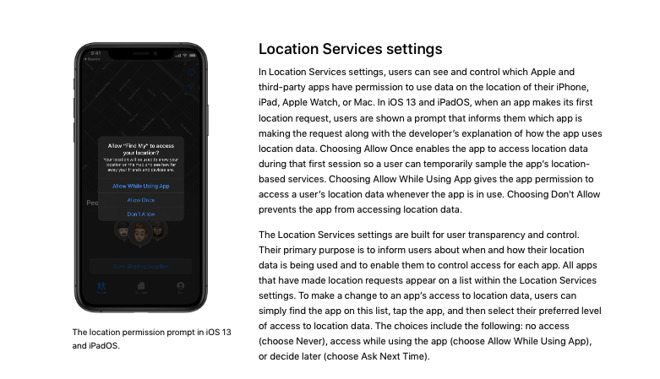 Detail from one of Apple's new White Papers on Privacy.

After it all blew over, though, Cook became more reflective.

When I step back from this terrible scenario that happened and say what more could we have done, I think about the awareness piece," he told the Wall Street Journal. "I think we have a responsibility to ratchet that up."

"That's not really an engineering thing," he continued. "We want to do everything we can do to protect our customers, because we are as outraged if not more so than they are."

San Bernardino, the iPhone 5c, and the FBI

Celebgate is the reason you now get emailed whenever you log into iCloud from an unknown device. But it is not why the issue of Apple and privacy was ratcheted up. Arguably all the attention Apple gets today about privacy stems from December 2, 2015, and the San Bernardino attack.

During the FBI's investigation of that incident, it first requested and then increasingly pressed Apple to help. Specifically, it wanted Apple to make a new version of iOS that they could open to read the phone data of any suspects they needed. And Apple said no.

In retrospect, it was a clear continuation of everything Jobs and then Cook had said, but at the time, throughout early 2016, it was seen as Apple versus the FBI. The Bureau painted this as Apple being on the side of criminals, and in a public statement, Apple painted it as their being on the side of our civil liberties.

The United States government has demanded that Apple take an unprecedented step which threatens the security of our customers. We oppose this order, which has implications far beyond the legal case at hand.

This moment calls for public discussion, and we want our customers and people around the country to understand what is at stake.

The statement, a letter by Tim Cook, is still available on Apple's site, and it takes very careful steps through the argument that any backdoor would ultimately be exploited by criminals.

Through a mixture of technology, security and that "awareness piece" that Cook described, Apple won the day and the FBI backed down.

Since then, Cook has said publicly that he wishes the case against the FBI had gone to court, and since then he has been increasingly vocal about privacy issues, most noticeably this year.

Just a few days into 2019, Apple, which was not exhibiting at the Las Vegas Consumer Electronics Show, nonetheless displayed a billboard ad about privacy there. 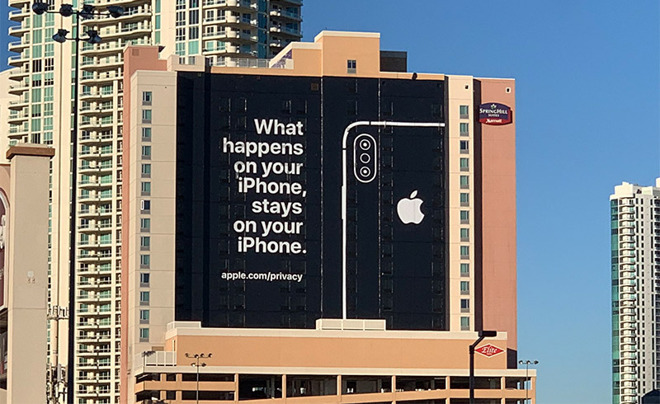 Then at WWDC, Apple announced new measures to protect the privacy of children. It has added tougher privacy provisions to iOS 13 to make messaging apps work more security.

It's also had its problems this year, as along with the likes of Google Home and Amazon Alexa, Apple's Siri was revealed to record users requests and have staff analyse them. It was all anonymised, it was all in the ambition of improving Siri's accuracy, but it backfired.

Facebook's Mark Zuckerberg has previously described Apple's attitudes to privacy as being "glib," and suggesting that it's fine to have a high horse when you've got all that money.

He does have a point, even if his firm is not exactly destitute either. You can see Apple as being on the side of the angels in all this. Or you can more cynically see it as making a profitable virtue out of the fact that it's always made its money though selling devices instead of through selling data about its users.

Either way, though, you can't argue that Apple is jumping on a bandwagon. Apple's been publicly vehement about privacy for at least the last decade, and the newly redesigned Privacy website is just the latest part of that.