AppleInsider
Posted: November 22, 2019 2:51PM
in General Discussion edited January 2021
Polk's Command Bar is the embodiment of Amazon Alexa in front of your TV. With useful features such as a compartment for a Fire TV stick paired with good sound, the Command Bar is a solid option for Alexa users. 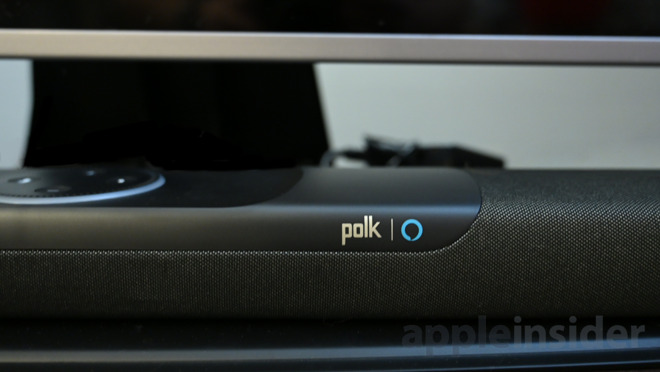 The TV soundbar market is heating up, with competition coming in from all sides. Polk's Command Bar aims to differentiate itself by pairing a wireless sub and baking in a bunch of smart features and tight Amazon integration. 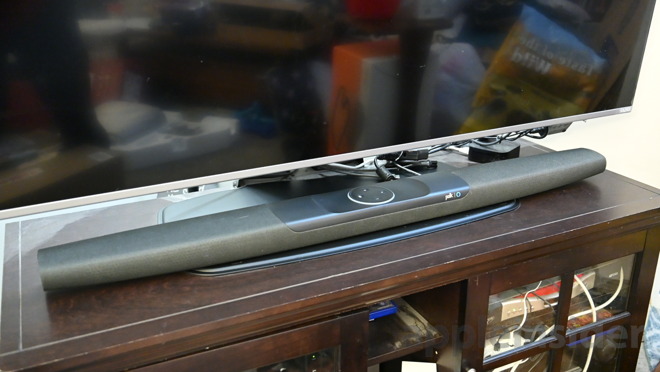 The Polk Command Bar has an attractive, sleek appearance that tapers at either end of its 43-inch width. Even the included sub is appreciatively slim in its build, more easily fitting next to an entertainment system or behind a chair. 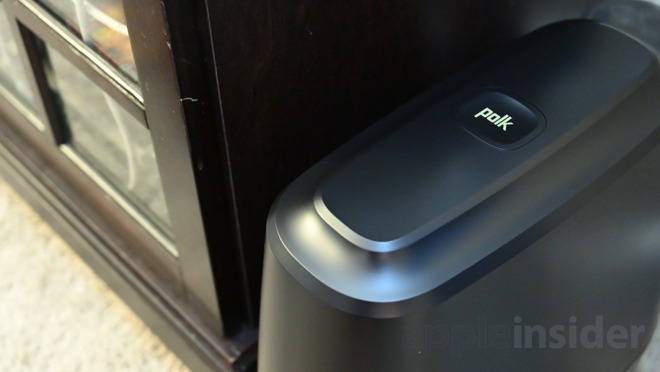 Speaking of said sub, if it looks familiar, that's because it is the same as what is included with the MagniFi Mini which happens to have been designed by the same team. 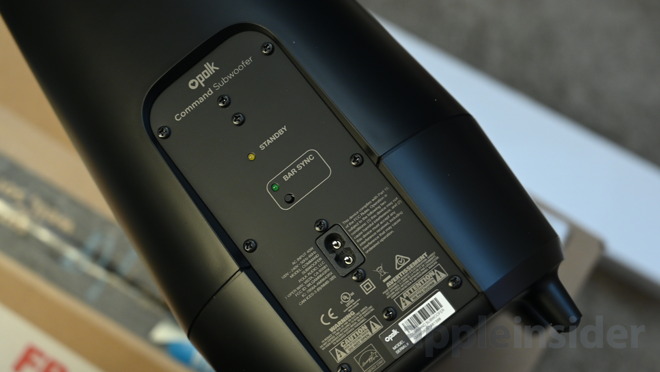 The subwoofer is simple, with just a sync button on the back and a standard power receptacle. 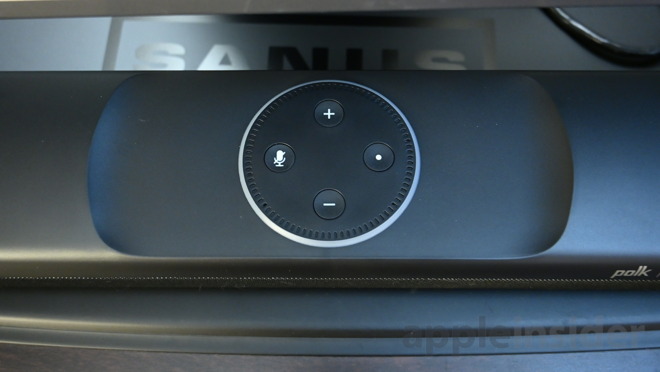 Most prominent, is what clearly appears to be an Amazon Echo Dot smack dab in the center of the Command Bar. It, of course, isn't an actual Echo Dot but is clearly meant to emulate one -- complete with a glowing blue ring of light.

That ring of light encircles four controls for volume and microphone controls and is blue when Alexa is active. It also doubles as a volume indicator. Luckily the lights aren't on perpetually but it is more intrusive than other, more subtle lights we've seen in most soundbars with Alexa. 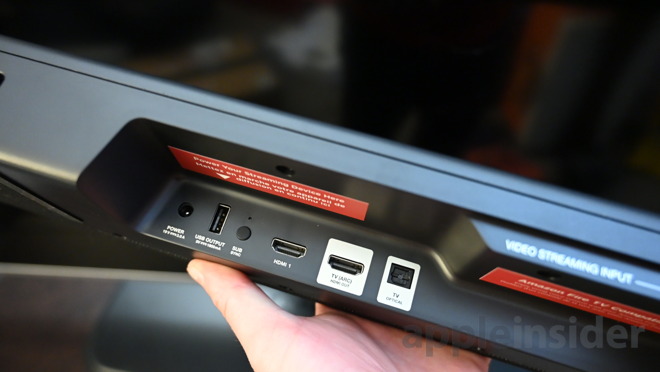 Around the back of the Command Bar are quite a few ports -- dual 4K-HDR-compatible HDMI 2.0b inputs, HDMI-ARC, USB, and optical audio. 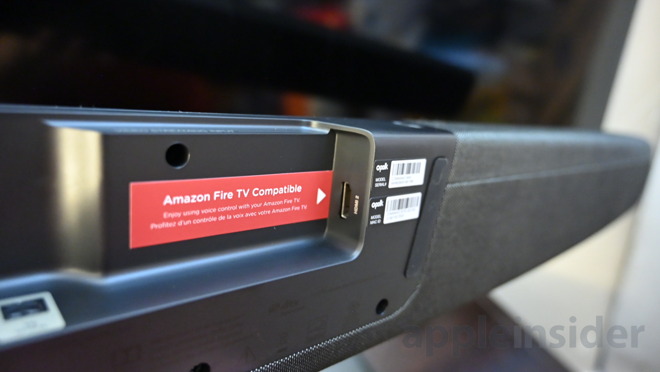 One of those HDMI ports is designed to hide an Amazon Fire Stick sideways so it doesn't stick directly out the back. If you have a Fire Stick, this is a smart inclusion. 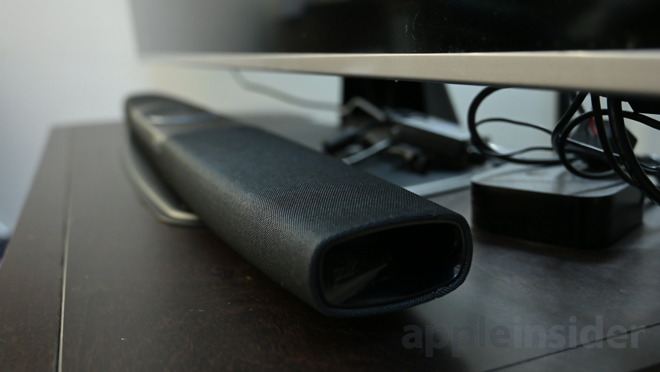 Bass ports on the ends of the Polk Command Bar

The drivers and bass ports of the soundbar are situated at the end, with each of them open.

The most enticing aspect of this soundbar is the smarts, rather than the sound. Not to dis the sound, but it alone isn't the reason to pick up the Command Bar.

We love how an Amazon Fire TV stick can be sideloaded right into the back without it protruding from the back awkwardly and removing the need to fit it behind the TV.

When you connect something else to the other HDMI slot -- say an Apple TV, cable box, or PS4 -- you can easily change inputs with the Command Bar remote. Even better, you can just ask Alexa to change inputs. This is a great feature and it makes changing those inputs easy though it gets complicated if you have more than two components to plug in. 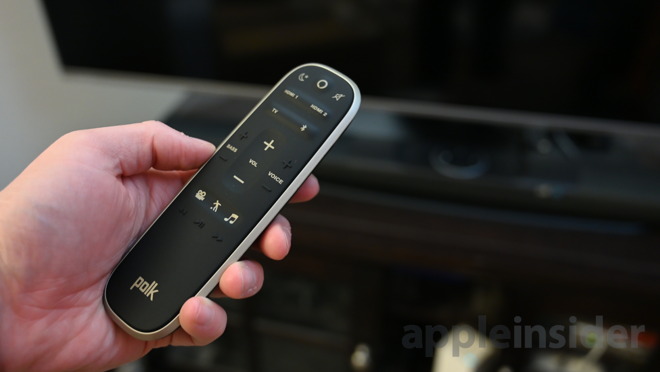 The remote is also smartly designed. It has a good, rounded feel, all the normal controls, plus a few additional.

There is a handy night mode to reduce loud sounds and an Alexa button. The Alexa button doesn't use a microphone on the remote, but rather will turn on the listening mode on the soundbar. This is helpful because if the TV is turned up, it won't always hear the keyword so having physical buttons is crucial. It will even lower the volume of whatever is playing while it is listening.

Aside from night mode, there is also built-in smart EQ for movies, music, and sports that did make a difference while we were watching.

Lastly, the soundbar also works over Bluetooth so if you'd like, it can be used as a normal Bluetooth speaker.

Our only complaint in the smarts department is AirPlay 2. We love AirPlay 2 and HomeKit and competitors like Klipsch and Sonos support this in their soundbars, it is a disappointment that Polk does not.

It was thankfully updated since launch with multi-room audio support for music which is a solid alternative with other Alexa-enabled speakers in the home.

If you are an Alexa user, you no doubt know everything else Alexa can pull off. Stream from iHeart Radio, Apple Music, Pandora, Spotify, Sirius XM, and countless other music services. Control your Alexa-enabled smart home device. Set timers, ask questions, and much more.

We compared the Polk Command Bar most directly with the Sonos Beam, which we reviewed last year. 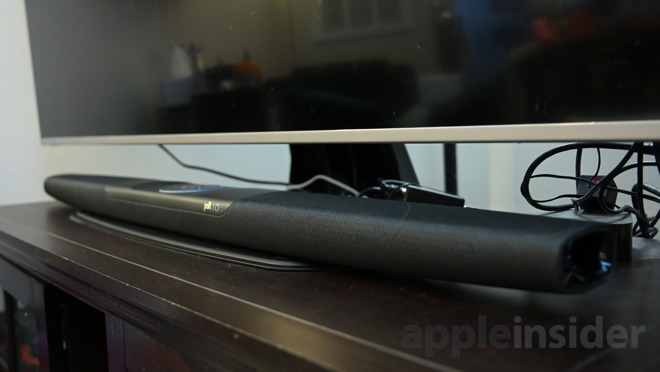 In music playback, Sonos clearly had the edge. Music was fuller and there was a more immersive sound stage -- especially when using our Ikea Bookshelf speakers as surrounds.

However, when it came to TV and movies, while the sound wasn't better on the Command Bar, dialogue was more intelligible and the bass was much better as a whole. The Beam doesn't ship with a sub though and is a much pricier add-on if you do want to add that to the Beam down the line.

As a whole package, the Command Bar sounds good, though we wouldn't say great.

Should you buy it?

If you are looking for an all-around good soundbar that has a subwoofer included and you are invested into the Amazon Alexa ecosystem, then absolutely go with the Command Bar. It was designed closely with Amazon and is basically as close to an Amazon Echo soundbar you'll get at the moment.

It looks sleek, if not a little bit wide, but is a solid value for entry-level home theaters.

You can buy the Polk Command Bar, of course, on Amazon for $239 with Prime delivery.