$73K in Apple products stolen from Target, iPad thief chased by 71-year-old on the Apple C... 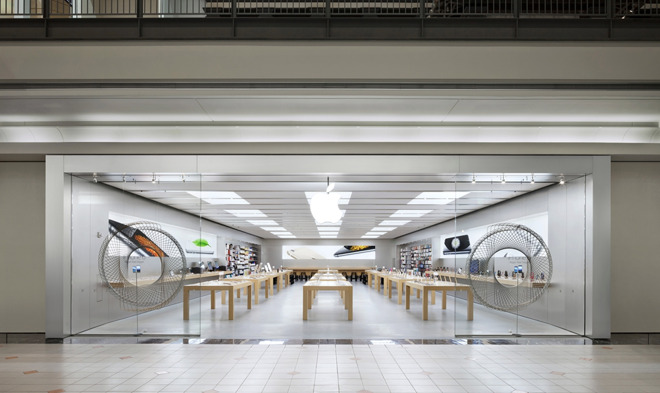 A septuagenarian British woman who owns a flower shop arrived one morning to find her store ransacked, and later that day decided to track down her stolen iPad, using the Find My iPhone app.

According to The Lancashire Post, the expedition led her to the door of the suspect's apartment, at which point he brandished a knife, however, police soon arrived and arrested the man.

A 40-year-old man in Florida has been charged with using a sword to rob a salesman of his iPad. Bradenton.com reports a home-alarm salesman was going door-to-door when the accused perpetrator grabbed the salesman's iPad. Shortly afterwards, the perpetrator produced a sword, which he brandished in "a threatening manner."

The man was soon arrested, and charged with armed robbery.

We told you last time about an incident in Bakersfield, Calif., in which a young woman who brought her iPhone to an Apple Store discovered that an employee of the store had emailed an intimate photo of the customer to himself from the phone. Now, per KRON, police have opened a criminal investigation into the matter.

The employee in question was fired following the initial discovery.

A man in Seattle whose iPad and laptop were stolen got his items back by tracking them to a fast-food restaurant parking lot in the city's Capitol Hill section, leading to three arrests. Reported by Key News Network, police tracked the signal to a car -- which had also been reported stolen -- and found the trio of accused perpetrators.

Men charged with stealing $73,000 of Apple products from Target

Police in Delaware arrested three New York men, stating that they had stolen more than $70,000 worth of Apple products from a secured case at a Dover-area Target. According to WBOC, police say the men also attempted a similar theft at a Target elsewhere in Delaware.

It was a frequent occurrence during Robert Mueller's investigation into Russian interference for large numbers of iPhones, iPods and other devices to be seized from such targets of the probe as Paul Manafort and Roger Stone. Now, that's happened in the Ukraine investigation as well.

The Washington Post writes Lev Parnas, the associate of presidential attorney Rudy Giuliani who was charged with campaign finance violations, had numerous devices, including "two iPhones, a Samsung device, an iPad and another cellphone," seized when he was arrested in October at Dulles International Airport in Virginia.

Parnas' attorney asked the judge to turn over the devices, which are in federal custody, in order to comply with a Congressional subpoena.

Two California men were arrested, police say, after they were found with a stolen Apple Watch that was pinged by its owner. According to Fox 40, police were searching the motorhome with he two suspects inside it when the Watch made a sound, indicating that it was on the premises.

Rep. Duncan Hunter of California, who was indicted last year on charges that he directed more than $250,00 in campaign funds towards his personal use, changed his plea to guilty, NBC News reported.

The indictment against Hunter, which had also named his wife, alleged that the Congressman's improper spending including two visits to the Apple Store, which included the purchase of a $1,199 Mac computer in 2010.


An iPhone 10 was stolen last week at a Bagel Buffet location in Secaucus, N.J. The owner of the phone had arranged to meet at the location in order to sell the device to a buyer they had met on Craigslist. However, a co-conspirator of the "buyer" showed up, grabbed the phone, and ran, per Patch. The man who took the phone was apprehended and charged with theft and conspiracy to commit theft, and was also held on an outstanding warrant.

Police in the Chicago area say a nationwide ring that steals credit cards from gym lockers has recently been active in the area. According to NBC Chicago, the ring has hit five different gyms in the Chicago suburbs, and has gone on to spend "approximately $30,000 on Apple products and high-end jewelry" at a local high-end mall.

The crew is said to consist of more than 20 people, who are described as "Eastern Europeans."

Police are looking for three men who they say stole 15 Apple Watches from an Apple Store in Marlborough, Mass. WCVB reports two of the men acted as lookouts while the third took the items, which are valued at a total of about $8,000.