Tim Cook touches down in Singapore, visits students and game developers [u] 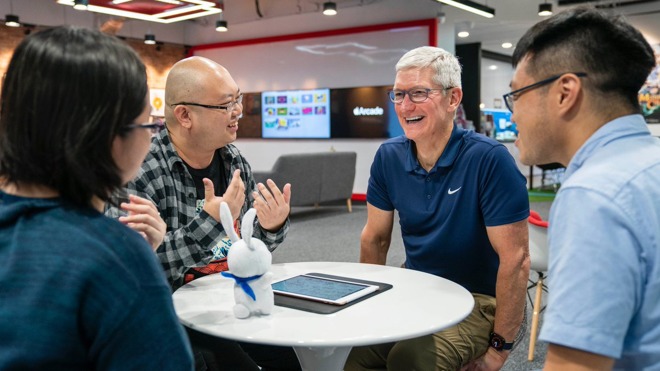 "Hello Singapore!" Cook tweeted on Dec. 10, alongside a photo of him in a food court. "Thanks to iPhone photographers Darren Soh (IG: darrensohphoto) and Aik Beng Chia (IG: aikbengchia) for sharing their love of Tiong Bahru's rich heritage-- and amazing food!"

Singapore lies just off the coast of southern Malaysia and is 16 hours ahead of Pacific Standard time, meaning the tweet went live just shy of noon in Singapore -- the perfect time to grab a quick bite to eat.

While in Singapore, Cook dropped in on a Today At Apple session at Singapore's Apple Orchard Road, a flagship store that opened in 2017. While there, he took time to meet with a group of young students who are using ARKit to figure out solutions to keeping the oceans clean.

If we can visualize a greener future, we can make it real. Wonderful to take part in @MeshMinds' #TodayAtApple session at Apple Orchard Road to see how children are harnessing the power of ARKit to keep our oceans clean. pic.twitter.com/wD5kc0RiK8

He continued his trip by visiting a Singaporean high school where students are learning to code with Swift. Cook highlighted how impressed he was, shouting out Tinkercadamy and Apple's own "Everyone Can Code" initiative. Earlier this year, Apple had announced that they would be expanding their coding and education initiatives in Singapore and Indonesia.

I am so impressed with the high school students in Singapore's Swift Accelerator Program. They've been busy learning to code with @Tinkercademy teachers, and already have everything from AR to productivity apps live on the @AppStore! Nice work! #EveryoneCanCode pic.twitter.com/41LDv9eh1f

Cook also stopped by Singapore's PIXEL space, home base for developers of three Apple Arcade launch titles. Development teams The Gentlebros, BattleBrew and Tendays Studio work out of the space.

Three of our amazing @AppleArcade launch titles were created right here in Singapore's PIXEL space. Great to meet the teams at @TheGentlebros, @battlebrewpro and Tendays Studio. Your creativity and passion have captivated so many gaming fans around the world! pic.twitter.com/yK55zXmqgd

On Thursday, Cook met with paralympian Theresa Goh, who demonstrated how Apple Watch helps her train.

Cook made his way to Singapore after his recent two-day stay in Japan. It isn't clear if other stops are planned before his tour is complete.