AppleInsider
Posted: January 23, 2020 2:30PM
in AAPL Investors
Goldman Sachs CEO David Solomon claims the investment bank is happy with both its long-term relationship with Apple that started with the very first overnight bond issued when Steve Jobs returned to the company, all the way up to the current performance of Apple Card. 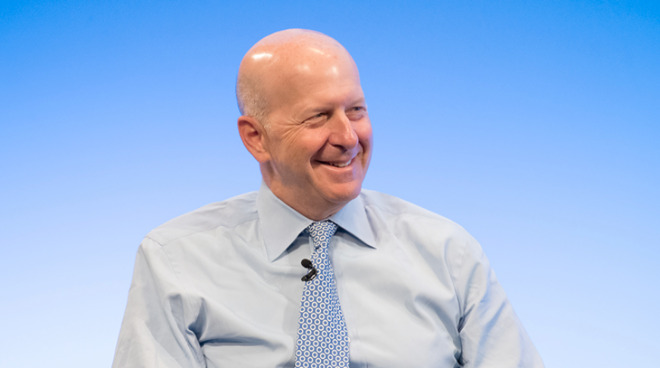 During an interview at the World Economic Forum's gathering at Davos, Solomon insisted Goldman Sachs is "very, very pleased" with its relationship with Apple, one that it had built up over time. Stressing the "long history" of the relationship, Solomon's boasted of the early days of Goldman Sach's work with the iPhone maker, and how the two worked together.

"Interestingly, we did not take Apple public in 1980. Our relationship with Apple really started in the 90's when Apple got into a little bit of trouble and needed capital," Solomon said to CNBC Squawk Box. The need for finance prompted Goldman Sachs to perform the "first-ever overnight convertible bond that was ever done" for a company, which Solomon believes started the relationship between the two firms.

Solomon suggests the history "allowed us to expand the partnership to do the (Apple) card," before reiterating Goldman Sach's pleasure of both its dealings with Apple and Apple Card.

When pressed on the expectations that Apple would promote Apple Card similar to its other services, like Apple TV+, and an implied lack of marketing being performed for the product, Solomon responds by suggesting the card is already very successful.

Reminding the host "First of all, we're five minutes into this, this started four months ago," Solomon explains the card is doing exceptionally well at the initial stages of its life. "We haven't disclosed the number of cards, but the take-up with cards is multiple-multiple what any co-branded card has ever had in the early days."

The success months down the line echoes earlier comments made by Solomon in October, where he expressed there was a "high level of consumer demand" for Apple Card, and that it was "the most successful credit card launch ever."

Continuing, Solomon talks about the work its doing as part of the creation of the card, claiming "we're building a platform for us, from a risk management perspective," with the platform set to "continue to grow plenty fast."

"We want to make sure that we're delivering for the customer first of all, and the customer's getting a great experience, that from a credit risk management perspective we're doing the right things, and I think (Apple is) supporting it in exactly the way they should be," Solomon concludes. "I'm very optimistic about the long-term partnership."

Solomon's comments arrive a week after Goldman Sachs' Chief Financial Officer Stephen Scherr alluded to Apple's branding and advertising that Apple Card was "Created by Apple, not a bank." Scherr's comments to analysts indicated he was rankled at the wording, stressing Goldman Sachs was the only institution making underwriting decisions and managing risk.