AppleInsider
Posted: January 24, 2020 5:02PM
in iOS edited January 2020
An outage of Apple's online services led to issues with the App Store for some customers, with users unable to manage subscriptions to Apple Music, Apple Arcade, and Apple TV+ from their iPhone or iPad. 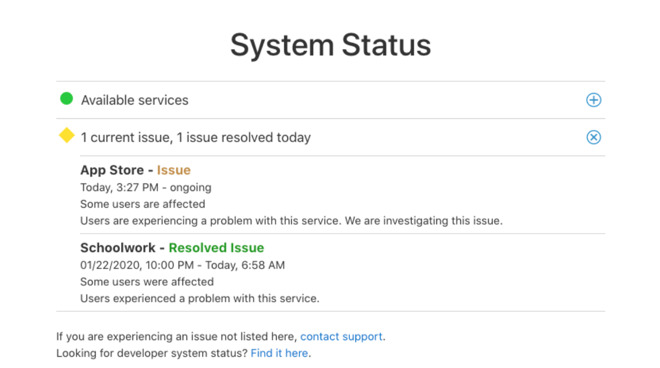 Starting from around 11 AM Eastern Time, Apple customers were discovering they were having problems accessing some elements of their Apple-related accounts. Issues for users predominantly involved an inability to access their subscriptions, though some were reporting other problems, such as not being able to buy items from the iTunes store.

Posts on Twitter include users being unable to log in or check on their iTunes purchases, or to view content on the Apple TV that they had bought previously. AppleInsider was contacted by one reader who suspected it was a "system-wide outage," and had spent more than 15 minutes waiting on the line to contact Apple support about the problem.

It is unclear how widespread the issue actually is, as there are relatively few complaints on social media at this time, with higher quantities typically inferring a bigger outage. The problem doesn't seem to be region-specific, as some members of AppleInsider staff report having the same issues in the United States and the United Kingdom, while others in the countries are seeing normal service.

It appears Apple is aware of the issues, as the System Status page identifies one ongoing issue with the App Store as of 11:27 AM Eastern. According to the status page, "some users are affected" and Apple is "investigating the issue," but doesn't go into detail about what is wrong.

Update: At about 2:30 P.M. Eastern Time, the problems appear to be resolved for most.