AppleInsider
Posted: January 28, 2020 1:34PM
in General Discussion
The eye-catching demo at the iPhone 11 Pro launch has now become a reality as Filmic brings the ability to record video from two cameras simultaneously -- but not to its Filmic Pro app. Instead, it's in a new, free app called DoubleTake. 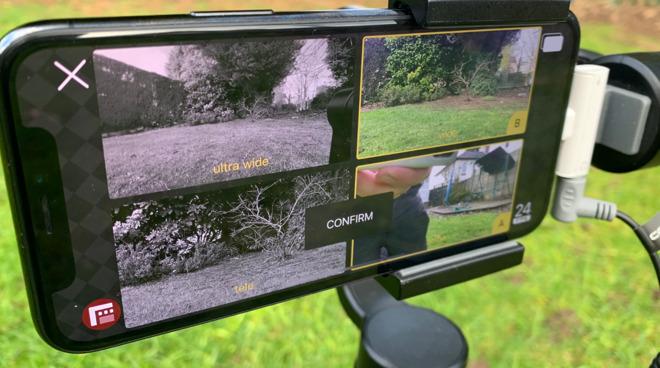 One of the most impressive demonstrations during Apple's September 2019 iPhone launch was from Filmic, which showed off a forthcoming version of its Filmic Pro app. That demo showed Filmic Pro shooting video with any two of the iPhone 11 Pro's cameras simultaneously and the feature was promised for the end of the year. It still hasn't arrived in Filmic Pro, but now users can try it out in the new DoubleTake app.

DoubleTake is only fractionally as powerful as Filmic Pro, but it's not solely a demonstration app. It's a capable video recording app and while these features are coming to Filmic Pro later, even here in this cut-down DoubleTake, they are useful.

By default, DoubleTake shoots with just one camera. While it works with any iPhone running iOS 13, it stays as a single camera recorder unless you have an iPhone XS, iPhone XS Max, iPhone XR, iPhone 11, iPhone 11 Pro or iPhone 11 Pro Max.

With those, there is the option to see the output of all the phone's cameras at once. They're shown in a similar way to the multi-camera displays that directors use for studio sitcom taping. The screen is divided into up to four quarters, each showing a reduced-size image.

Select any two cameras to record from

Initially, one of the four quarters are shown in color, the rest in black and white. The color one is the lens that was being shown for the single-camera recording option. Each camera image is labelled with Ultra Wide, Wide, Tele and Selfie where available, and users tap to select any two of them.

The first one tapped is called the A camera and the second is the B.

When two cameras are selected, DoubleTake displays a Confirm button. Users can either tap again on the displays to select and deselect them, or press confirm.

Confirming the choice of cameras does not start recording. Instead, it returns to a single camera mode with a Picture-in-Picture (PiP) insert showing the second camera. Pressing the white record button sets both taping.

The PiP image can be moved around the display or expanded to full screen. It can't be resized in any other way, and if it's zoomed up to full screen, the other camera's output is covered up.

Once finished, the output of each of the two cameras is saved as separate H.264 .MOV files. The same audio track is included with both.

During recording, one camera is shown Picture in Picture

DoubleTake videos look good, being shot with extended dynamic range in 1080p HD at 24, 25 or 30 frames per second. However, 1080p is rather low quality compared to 4K which is going to limit the uses filmmakers can put this feature to.

That limitation is not something that the full Filmic Pro will overcome, either. It's a limitation baked into iOS which provides a Multicam API for any developer to use, but caps it at this 1080p regardless of the capabilities of the camera.

Nonetheless, the ability to shoot both sides of a conversation at once is useful. Having both a wide and ultrawide version of the same recording also makes editing faster. So multicam is a very welcome addition to iPhones, even if it chiefly leaves users wanting more.