AppleInsider
Posted: January 31, 2020 1:55PM
in General Discussion
A consortium of 137 countries has agreed to revamp tax rules to close decades-old loopholes for multinational corporations. It's prompted by the rise of digital firms but Apple, for one, has been a vocal supporter of reform. 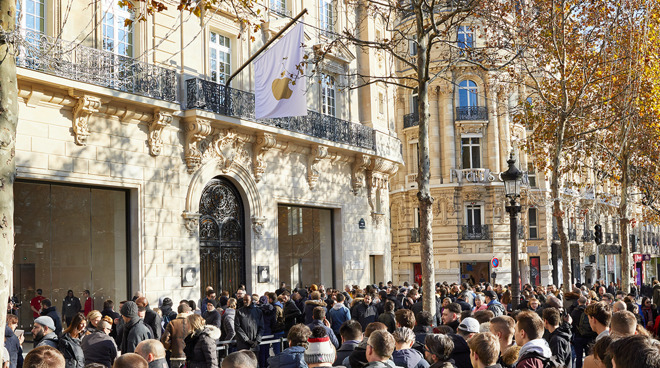 Apple's Champs-Elysees store in Paris, the city where this week's OECD talks have been held

The Organization for Economic Cooperation and Development (OECD) has announced that officials from 137 governments have agreed to launch new negotiations that will potentially see international tax laws radically revamped.

Current tax laws have not been substantially changed in decades, but the enormous rise of digital firms has put the system under pressure. When the tax laws were created, they were founded on the assumption that multinational firms would have a physical presence in each territory where they operated.

With digital firms, this is no longer true and it's created loopholes. Corporations can choose to pay tax through any country where they do have an office, so they can also elect to pick the country with the lowest tax fees.

Apple, although a vocal supporter of tax reform, has benefited from this too, with its European operation effectively being taxed as if it's all going through the company's offices in Ireland.

While that specific example has resulted in Apple becoming embroiled in legal dispute with the European Union, Tim Cook has recently been promoting tax reform of the type now proposed.

"I think logically everybody knows it needs to be rehauled, I would certainly be the last person to say that the current system or the past system was the perfect system," said Cook before today's news. "I'm hopeful and optimistic that [the OECD] will find something."

Now, according to Reuters, the OECD has gathered enough support at its Paris talks to announce the group proposals.

Pressure to reform the tax system has been growing so much that countries such as France have introduced or proposed their own reforms rather than wait for consensus. These moves, though, have added to what the OECD sees as a need for urgent negotiations.

France has decided to postpone its new digital tax while the French and US governments are in trade discussions. That truce will continue to the end of 2020.

It's not yet known when the OECD believes governments can agree and implement reforms.
«12»