Samsung has just launched the Galaxy S20, S20 Plus, and S20 Ultra

AppleInsider
Posted: February 11, 2020 7:08PM
in General Discussion edited February 2020
Samsung has just launched the Galaxy S20, S20 Plus, and S20 Ultra, the latest generation of its flagship smartphone line and main rival to Apple's iPhone, with Samsung including 5G support options and the ability to take 108-megapixel photographs. 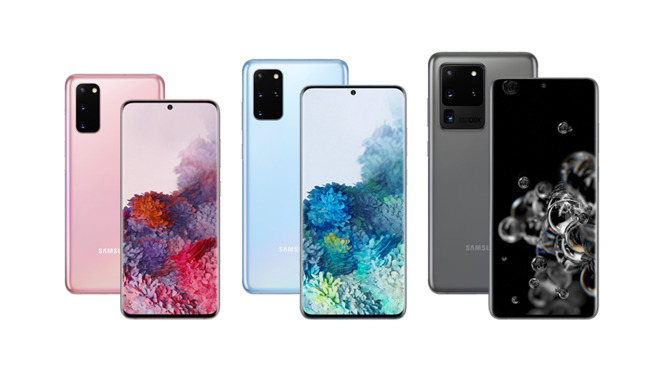 Just as previously rumored, Samsung is making a considerable jump in its numbering system for the Galaxy range, moving from the S10 for last year's launches to the S20 in Tuesday's Unpacked event. Just as last year, and to keep up with Apple's strategy of releasing three main iPhone models, Samsung has opted to introduce three as well, under the names the Galaxy S20, the S20 Plus, and the S20 Ultra.

The Galaxy S20+ and Galaxy S20 Ultra take advantage of both sub-6GHz networks and mmWave. The Galaxy S20 supports sub-6Ghz only. Versions will also be provided in LTE-only form in some markets.

All models are based on Samsung's Exynos 990, a 7-nanometer chipset, with an octa-core processor, with versions including maximum clock speeds for cores at 2.8GHz and 2.7GHz. Naturally, it will be running on Android 10.

Depending on the model, it will be supported by either 8GB, 12GB, or 16GB of memory. The storage capacities range from 128GB to 512GB, with all offering microSD expansion for up to 1 terabyte.

One big feature of the class of 2020 is the camera upgrades, made to both the front and back of the models. On the S20 and S20 Plus includes a 12-megapixel main wide camera along with a 12-megapixel ultra-wide version, and a 64-megapixel telephoto, complete with 3x optical zoom and 30x digital zoom. The Plus also gains a Time of Flight camera on the rear.

The S20 Ultra is equipped with the same 12-megapixel ultra-wide sensor, along with the ToF camera, but while the telephoto is smaller in terms of resolution at 48 megapixels the main wide camera has a 108-megapixel sensor. Optical zoom is boosted to 10x while digital zoom goes up to 100-times magnification.

On the front, both the S20 and S20 Plus use 10-megapixel cameras, with the Ultra again getting the bigger 40-megapixel sensor. For video, all rear cameras can film at an 8K resolution at 30fps, and the front is capable of 4K capture at up to 60 frames per second.

Battery life starts from 4,000mAh on the S20, rising to 4,500mAh on the Plus, and 5,000mAh on the Ultra. Fast Wireless Charging 2.0 support and Wireless PowerSare are also included, with the latter allowing the models to provide power wirelessly to another Qi-compatible device. Fast charging over a cable is also possible using the supplied 25W charger, with the Ultra also supporting recharging at 45W.

Aside from LTE and 5G, connectivity includes dual-band Wi-Fi at up to 1.2Gbps speeds, Bluetooth 5.0, NFC, and GPS support. Biometric security includes face recognition and a fingerprint sensor.