Touch-sensitive MacBook Pro keys could work together as a trackpad

AppleInsider
Posted: March 10, 2020 4:21PM
in Future Apple Hardware
A future keyboard for a Mac may offer touch-sensitive keys on top of mechanical switches, a feature that could effectively turn the keyboard surface into a simulated trackpad. 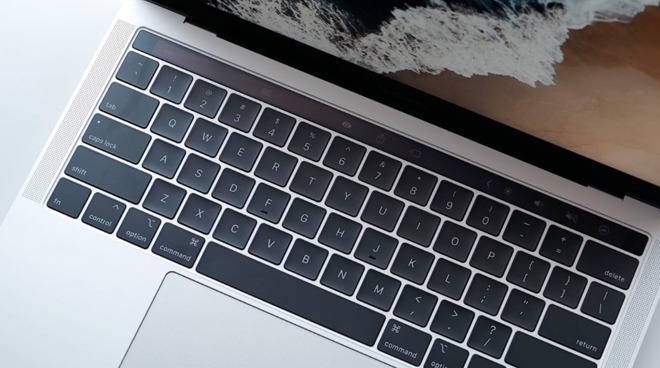 The design of the MacBook Pro and other notebooks relies on there being a separate trackpad and keyboard, giving two separate input surfaces for typing and for moving a cursor. While it is possible to control the cursor in other ways, such as by connecting a mouse or employing a touchscreen in some notebooks, the trackpad has endured as a mainstay of standard notebook designs.

The trackpad, like touchscreens and mice, do have the disadvantage for users of pulling the hands relatively far away from the keyboard to interact with the cursor. This can reduce the efficiency of the user's typing, slowing down their typing speed to handle the interaction and possibly breaking their concentration for a short time.

In a patent granted to Apple on Tuesday by the U.S. Patent and Trademark Office, titled "Touch sensitive mechanical keyboard," Apple proposes the use of a mechanical keyboard equipped with a touch-sensitive surface. The top of each keycap of the keyboard would be capable of recognizing hand and finger motion, which could be interpreted into cursor movements on a connected Mac display. 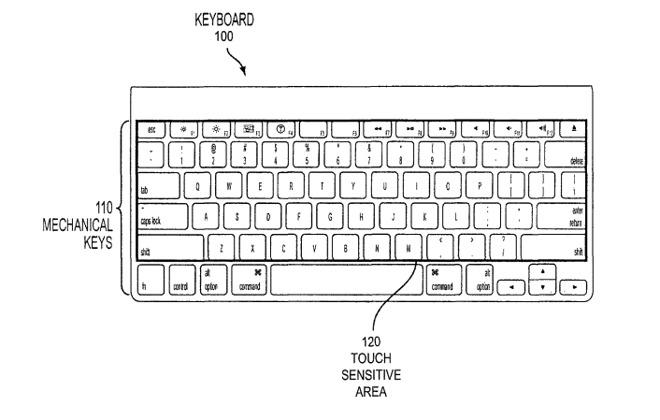 By making the keyboard itself a touch-sensitive surface, this would allow for the user to move the cursor without moving their hand at all. It would be feasible that a simple hand gesture or a move of a finger on a key could be enough for the required interaction, with no need to spend time moving the hands away and returning them to the keyboard.

In Apple's concept, the keycaps would feature a cluster of capacitive sensors near the surface, in order to read pressure and movements. Larger movements would be made by interpreting a movement that goes off from one keycap and onto a nearby neighbor, which may continue to subsequent neighboring keys.

The keyboard has two different modes, enabling it to be used for typing or as a trackpad. By pressing arbitrary combinations of keys, or by the keyboard detecting a user's motion as wishing to use the touch-sensitive functionality, the keyboard can switch between the two modes.

By pressing a key combination with one hand, the other could use the keyboard as a touchpad

Apple files numerous patent applications with the USPTO on a weekly basis, but while the existence of a patent indicates areas of interest for the company's research and development efforts, it does not guarantee the concept will make its way into a future product or service.

The invention's sole inventor is listed as John Greer Elias. Searches on Justia reveal Elias is connected to a large number of Apple patents, with filings covering multitouch functionality for touchscreens, hover gestures, magnetic sensors, and even VR gloves.

The patent has an interesting history, as it was originally filed on December 12, 2008, meaning it took over 11 years to move from application to patent. In that time, Elias worked with Steven J. Martisauskas on the similar "Fusion Keyboard," which differs in being able to detect the depression of individual keys, as well as their touch capabilities.

The Fusion Keyboard patent had a far faster turnaround time at the USPTO, having been filed in 2011 and granted in 2015.

Other keyboard patent filings include Apple investigating the use of new mechanisms to make the keyboard thinner, keyboards without keys that use haptic feedback, optical keyboard switches, and the use of an OLED panel as a second screen that doubles as a keyboard. Apple has also considered enabling keyboard accessories for an iPad to transmit key presses via the touchscreen, and adding screens to the trackpad and keyboard.