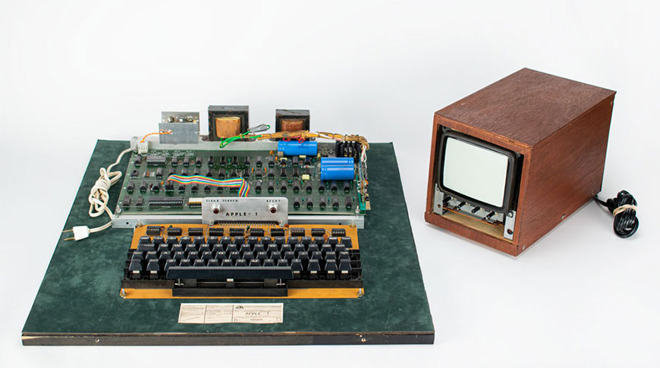 Apple co-founder Steve Wozniak is thought to have built about 200 Apple-1 computers, making them a rare collector's item.

The machine was appraised earlier in 2020 on an episode of "Pawn Stars" and was found to be an "amazing example" worth at least $500,000. While RR Auction attempted to sell the machine to World Famous Gold & Silver Pawn Shop owner Rick Harrison, he passed on the offer.

According to RR Auction, this specific Apple-1 was acquired by Michigan computer store SoftWarehouse in the 1980s as part of a trade for IBM machines. It was displayed in a museum case before being placed into storage.

The lot included the original board with a Synertek CPU, Apple Cassette Interface, display case, keyboard kit, power supply, monitor and manuals. The starting bid was set at $50,000.

Apple co-founder and engineer Steve Wozniak is believed to have hand-built about 200 Apple-1 computers. Steve Jobs and company later sold about 175 of those, including 50 in an order to The Byte Shop in California.

This isn't the first time that an Apple-1 has fetched a similar price at auction. In May 2019, another Apple-1 was sold for around $471,000 at Christie's auction house in London.

Later that year, an original Apple-1 manual sold for $12,956 at RR Auction. About 65 of the original manuals are thought to exist, making them a bit rarer than the machines they were packaged with.