AppleInsider
Posted: March 17, 2020 12:39PM
in iPod + iTunes + AppleTV edited March 2020
NBCUniversal will be offering people who can't go to the cinema the opportunity to watch new theatrical releases at home for $20 for two days, but it isn't yet clear if the features are coming to iTunes. 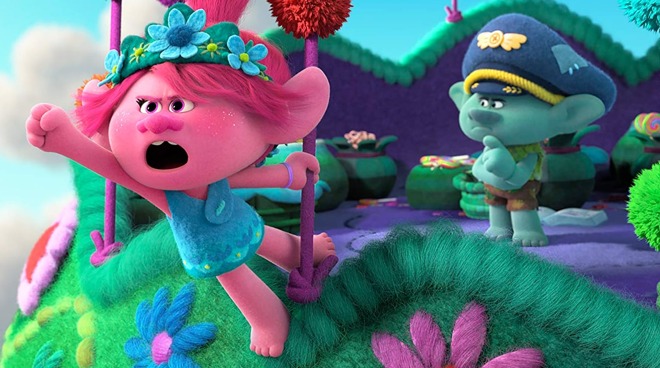 The ongoing coronavirus epidemic has forced the closure of many cinemas and other businesses, as governments around the world attempt to curtail the spread of the virus. The severe reduction in theaters has led to the possibility of movies losing money on their opening weekends, as fewer people will be able to pay to go and see them at the cinema itself.

As a workaround, NBCUniversal will be providing the option to rent new movies and those still in cinemas at home. Announced on Monday, the initiative will mean films from Universal Pictures and specialty label Focus Features will be offered to view as soon as March 20, including "The Hunt," "The Invisible Man," and "Emma."

DreamWorks Animation's "Trolls World Tour," originally intended to open in the U.S. from April 10, will be among the first movies to be offered for streaming from its theatrical launch under the new plans. Rentals for the movies will be available for 48-hour periods, at a suggested retail price of $19.99 in the U.S., and at equivalent prices in other markets.

The media giant specified that the rentals will be offered via Comcast and Sky's video-on-demand services, "as well as a broad range of on-demand partners." There is no mention of which specific services will be offering the rentals. Even if iTunes rentals are not included, there are a variety of other options that iPhone users should be able to choose from.

"Universal Pictures has a broad and diverse range of movies with 2020 being no exception. Rather than delaying these films or releasing them into a challenged distribution landscape, we wanted to provide an option for people to view these titles in the home that is both accessible and affordable," said NBCUniversal CEO Jeff Shell. "We hope and believe that people will still go to the movies in theaters where available, but we understand that for people in different areas of the world that is increasingly becoming less possible."